I just realized I haven't posted once in the entire month of February...

It's a good thing I get an extra day this year! ;)

Well I could make all excuses why I haven't been on here, but the main reason is I haven't made time for it. I've been working on some other projects in my free time, but I thought I would drop in today and tell ya'll hi so you didn't think I had dropped off the edge of the planet.

Well Spring is coming and boy am I getting excited and getting ready to plant me some tatters!!!

Another thing that happens this time of the year is baby calves are being born here on our farm. Usually it goes on without a problem and we just show up to the pasture and find a new little one running around but sometimes the cow can have problems and we have to give some assistance.

Well yesterday morning we had to do just that...

Caleb had been out feeding hay to the cows and saw one of our heifers trying to have a baby. He gave her about an hour and since there was no progress we got her in and pulled the calf. 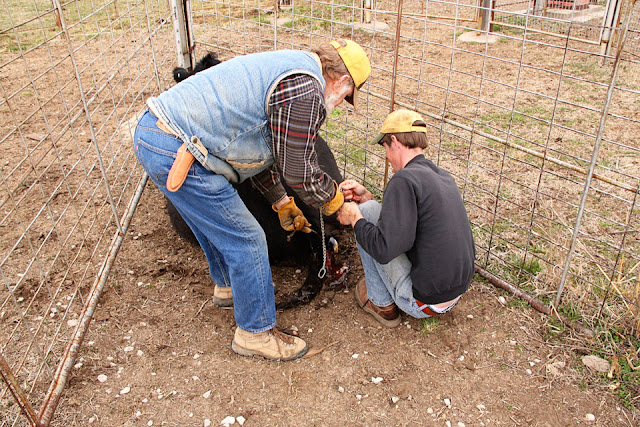 First you have to get the OB Chains around the calf's feet. 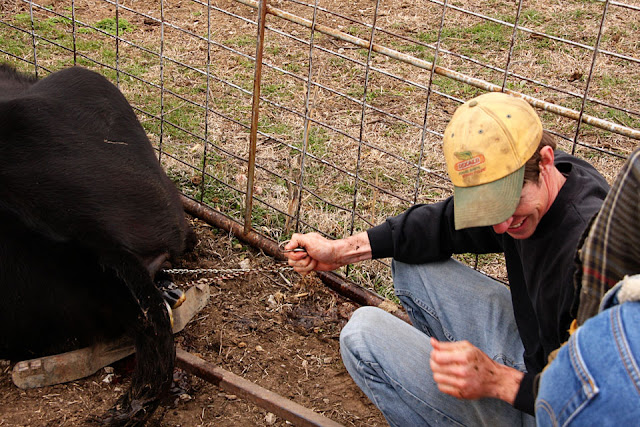 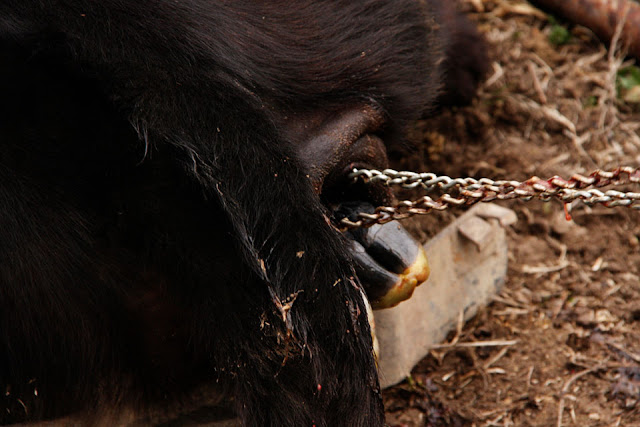 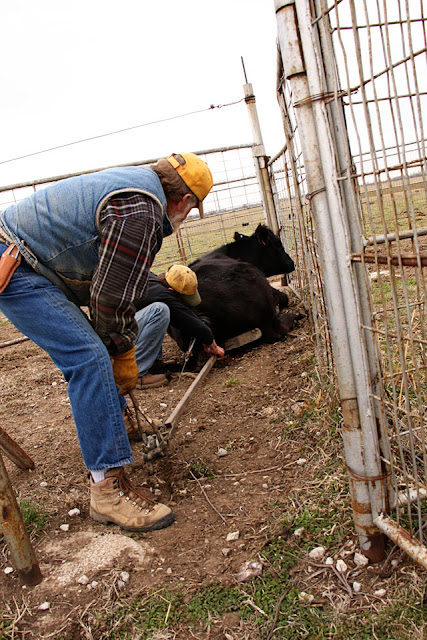 Once you got that you hook the chains to the puller. The puller has a ratcheting cable and you gradually ratchet it back and pull the calf out.

Here in this picture above we had a problem...

When pulling with a puller you either want the cow laying on her side or standing up, so you can get the pullers on the correct position of her hips so you don't hurt her. 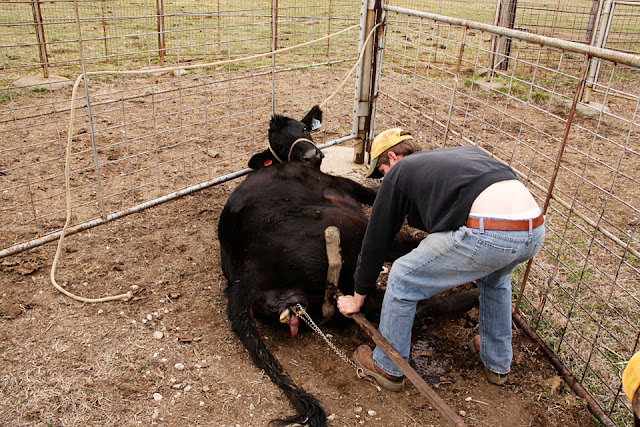 Finally after some some pushing around we finally got her to stay on her side so we could start pulling. 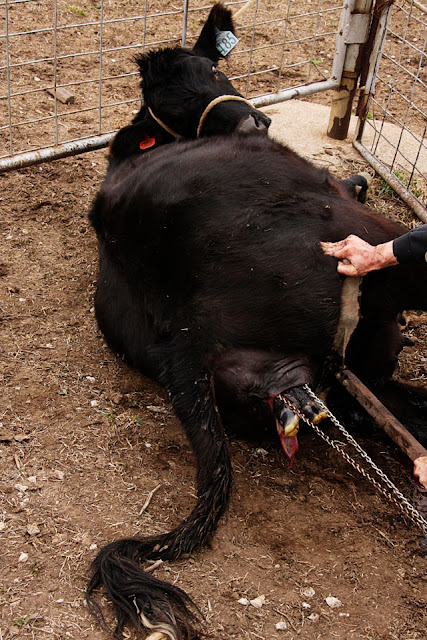 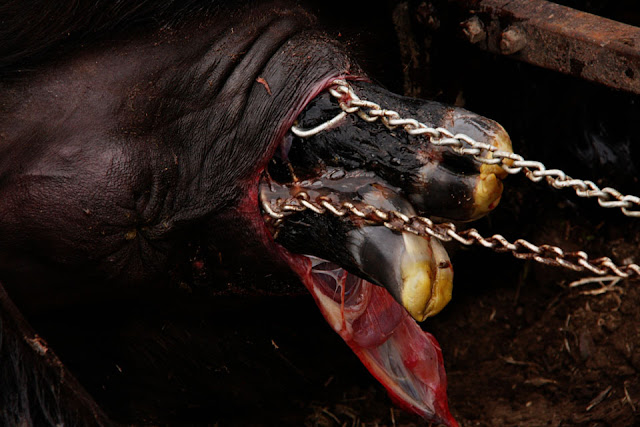 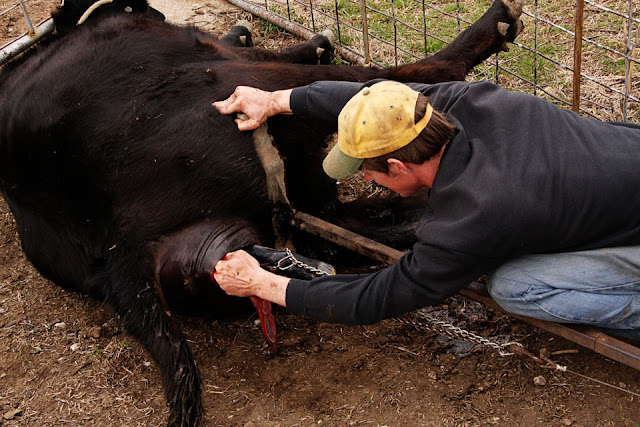 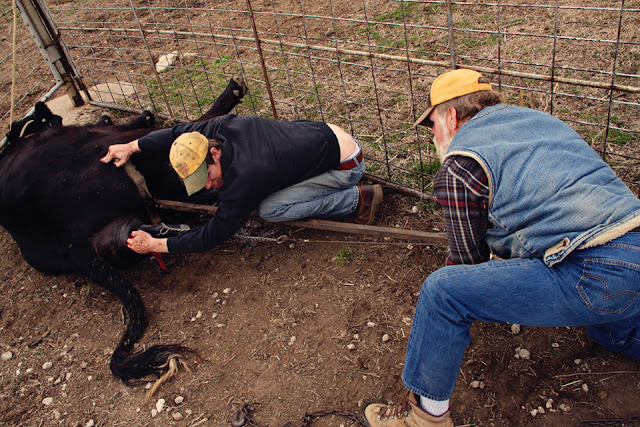 Caleb is sticking his hand in there to make sure the calf is coming out correctly and that the head doesn't get stuck backwards, cause that would mean big trouble for momma and baby. 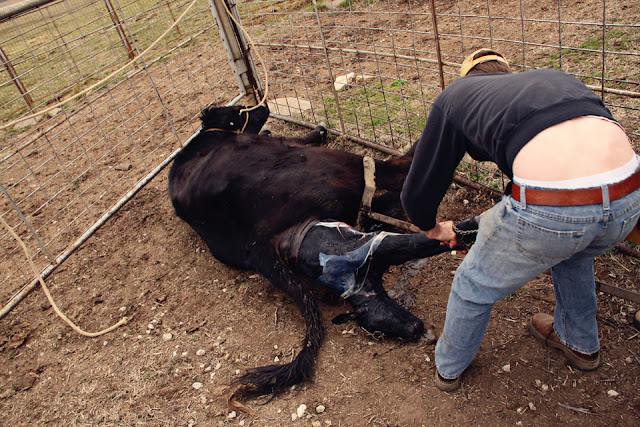 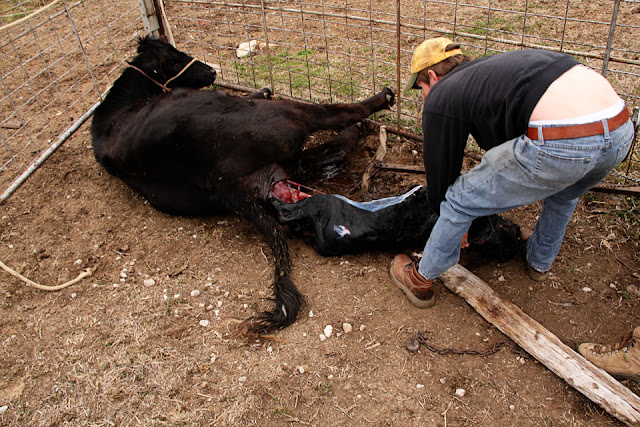 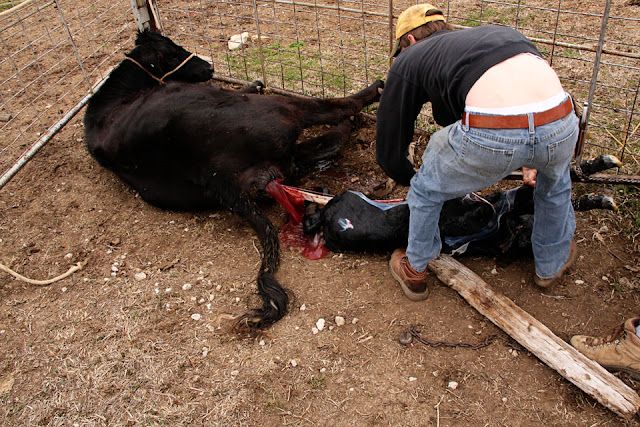 And finally after some hard work (both by Caleb and Jeff and the momma Cow) the baby was out... 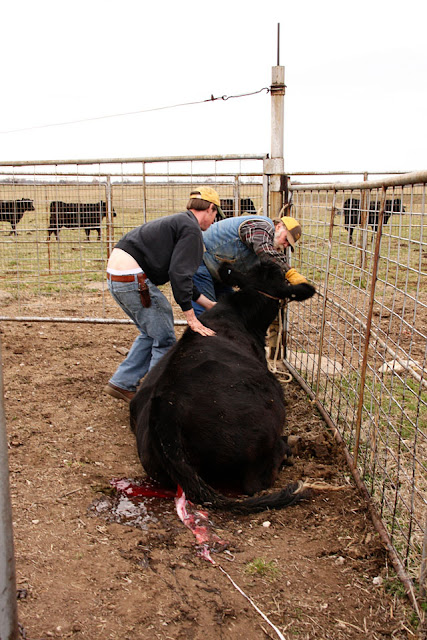 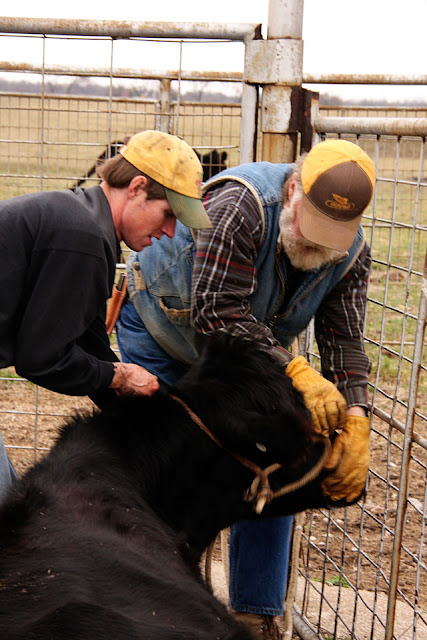 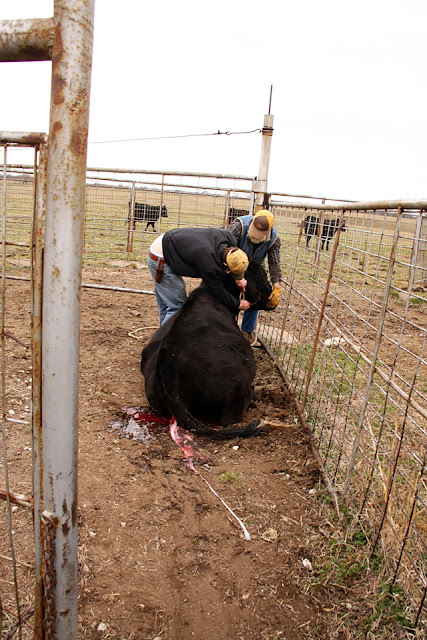 now once the calf was out Caleb, Jeff and I all worked hard to get the momma to stand up, cause the longer she stays down the harder it will be for her to get up. But finally after threatening to ride her she finally got up. 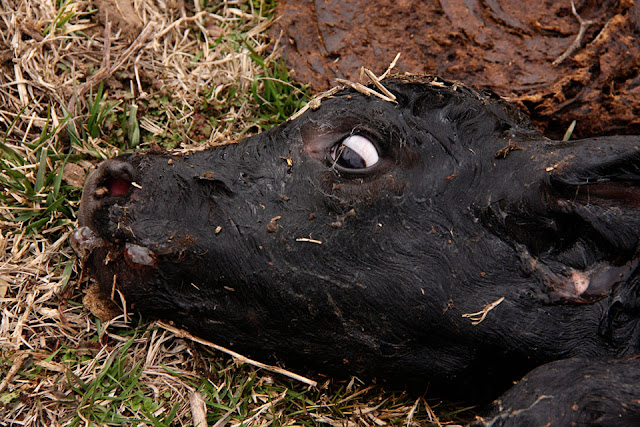 Baby was wide awake and doing fine. I love watching them right after they are born. They start moving around and try to figure out what just happened to them.

Fact: I never saw a cow give birth naturally until I was in college helping at the "Birthing Center" at the Ozark Empire Fair. I had been around cattle since I was in 1st Grade and we either pulled the calf or the calf was born when we got there. I'm pretty sure I haven't seen one since then either. 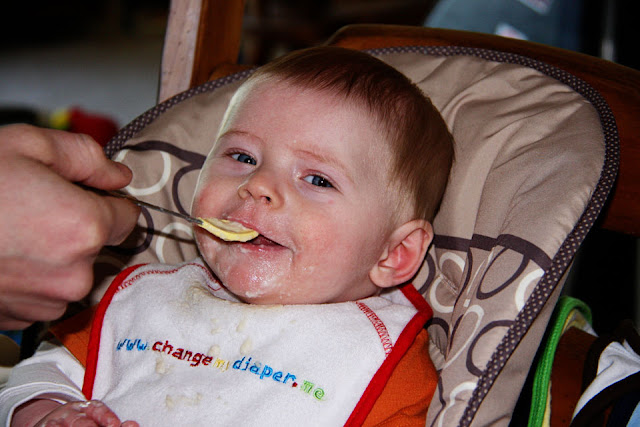 Little man is growing like crazy! He is eating rice cereal now and almost 5 months old...

WOW time is sure flying!! 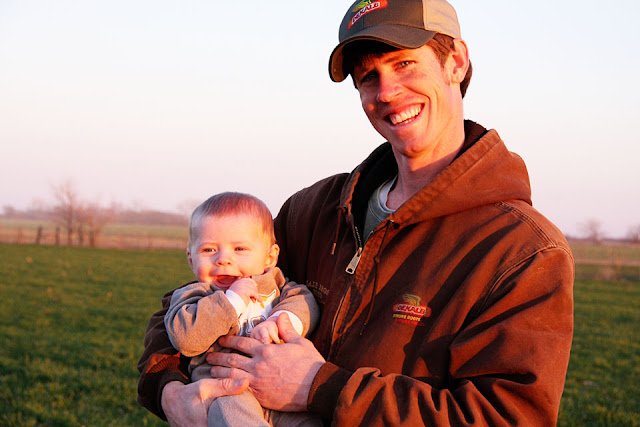 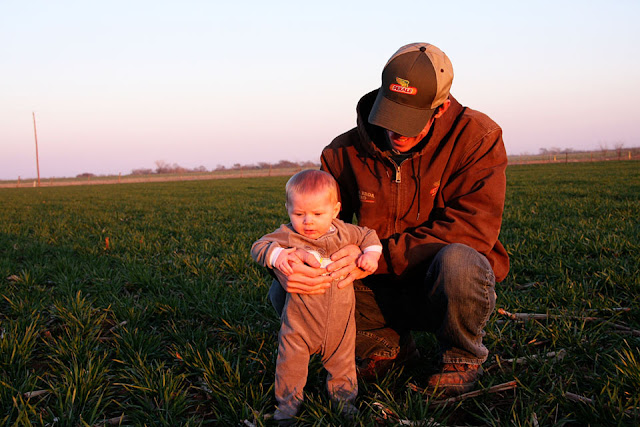 He is very much Daddy's helper. On this day we were out looking at the wheat and helping feed cattle. 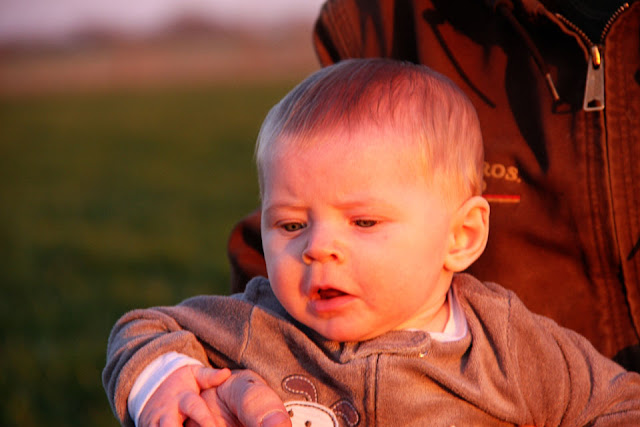 He jabbers all the time and and has been able to roll over both ways for about a month now...

And if we could get our arms and legs to work together we would be crawling....YIKES!!!

With that I had better get going.

Posted by Janet Phillips at 1:16 PM 11 comments: Links to this post