So a little over two weeks ago before corn harvest Caleb and I had an interesting morning dealing with our cat Dottie.....I have been wanting to blog this story for a while but since we have been in the field I haven't had a chance. So.....
To start off with let me tell you a little bit about our cat, Dottie and how we came to own her. Last winter when we would go and work on our house she would randomly show up, but wouldn't let you pet her....she would just meow a lot and then run away. Then one morning we found her in the live trap we had set to catch a skunk....since I had already been sprayed once in the past year by a skunk I was really kinda glad we didn't catch one!! Well after letting her go she got to where she would let you pet her some and as the days went by she became more needy and now every time you are near she wants your full attention and she is very vocal if she doesn't get it. You may think you have a cat that meows a lot, but compared to Dottie they are quite as a mouse. Speaking of mice, she is probably one of the best mousers that I have ever seen....that's the reason why we still have her....cause on top of her being extremely annoying is is also my least favorite looking type of cat.....my favorite would be a gray and black striped then a yellow/orange striped next would be a black and white....and my least favorite would have to be a gray and white....so of course the cat that comes with the place has to be a gray and white. So like I said even though I think she is ugly she is one heck of a mouser and that's part of the reason why we were in the predicament we were in a few weeks ago. 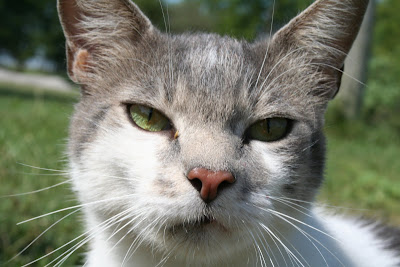 So on Saturday morning Caleb and I get up as usual I head to the kitchen to start the process of making another batch of salsa and Caleb headed to the garage to work on our porch swing (the porch swing is another story). Well I went out to the garage to ask Caleb a question and while I was out there I wanted to pet Dottie but didn't see her laying on her box full of carpet scraps like she usually does. 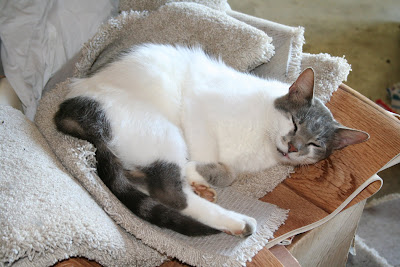 I ask Caleb if she was in there cause she figured out how she could come and go as she pleased so she wasn't always in the garage....but it's very rare that she is not in there. Caleb told me that he didn't know what she was doing, but she kept coming out and going back into the corner. When he told me that I immediately thought the corner where we put the rat poison out in....is she eating the poison...why haven't you looked to see what she is doing. So I go over and look under the work bench back in the corner....I see her back there and then I see some thing kinda fuzzy so I pull the rubbermaid container that is blocking my view and there I find a large rabbit that has been massacred and beheaded. So not only did she kill this big rabbit but she drug it into the garage up through the hole that Caleb put in the garage door last year...then she jumped up on the the rubbermaid container and dropped the rabbit off the back....I would say she got her workout for the day! Well when I see this seen I just start laughing and telling Dottie that she was a good cat....one less rabbit that will be getting into my garden....Caleb on the other had stands back gagging and and saying how gross and disgusting that it is. So in most relationships the guy would step up and clean-up the mess....not the case here Caleb kinda walks away and again comments on how disgusting it was...and I go and grab the headless rabbit as well as the head and take it outside to let Dottie finish eating then I get the Clorox spray and some paper towels and proceed to clean-up the mess all the time while Caleb is standing there watching and telling me I missed a spot and there was still a little rabbit blood on the floor over here.....hummm does something seem wrong here or is it just me. 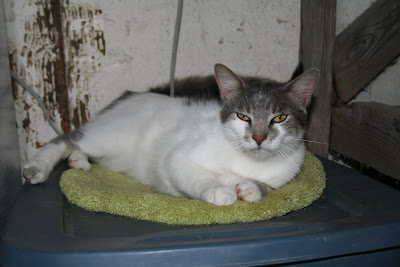 This is another one of Dottie's favorite sleeping places.

Posted by Janet Phillips at 9:00 PM

Email ThisBlogThis!Share to TwitterShare to FacebookShare to Pinterest
Labels: Life Around the Farm, Pets