OK, to be honest, I was suppose to do this post about a month ago, but life happens and well I haven't really been at my computer all that much. We have been in the corn field and I have been outside trying to get things done. So when I am home and inside it usually means I am trying to catch up on all the house work that needs done and when I get some time where I don't have anything special to do I just want to sit down, relax and eat or sleep!!
Anyways, back to what I'm gonna talk to ya'll about today, potatoes...
or as we call them around here tatters.
Potatoes are probably one of the easiest things to grow in the garden in my opinion. I always helped my mom plant them in here garden growing up and I plant them in mine every year.
Now it's said that you are suppose to plant potatoes on St. Patties Day, and if you look at your calender you will notice that was over a month ago, but don't worry cause there is still plenty of time to plant them. My Grandpa always says to plant them on Good Friday, because the moon is in the right phase for it and Good Friday is tomorrow so you still have time.
The first year I planted potatoes after Caleb and I got married I didn't get them planted till some time in May and they would have produced great if I hadn't gotten Brown Spot...but we will talk about that more later. Last year it was some time in April before I got my tatters in the ground and the they did amazing so really as long as you plant them sometime here in the spring they should do fine.
Ok now lets talk about what type of potatoes to plant....
Whatever you like.
There are all different types out there it really just has to do with what you want.
I am not a russet fan. They are ok when it comes to baked potatoes and fries but outside of that I just don't like their flavor and consistency, so I don't plant them. I do however love Red Potatoes so that is what my garden is full of. 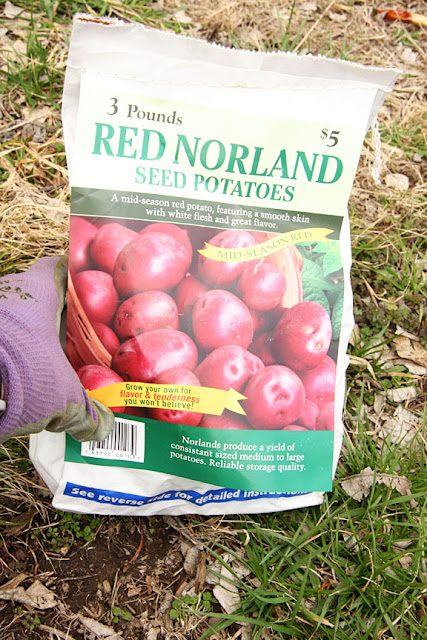 These are the variety I planted last year and I loved them!! I also planted some yellow potatoes, but luckily not very many, cause their flavor was not near as good.
I ended up planting planting 12 or 15 lbs, I can't remember if I had 4 or 5 bags. This was enough for about 1 2/3 a row. and my rows are about 50 ft long or so.
I bought these at Wal-Mart, but seed potatoes can also be found at Farm and Home stores, as well as ACE, or a local green house, or any place that sells a lot of vegetable seeds. You can also buy them from online retailers. 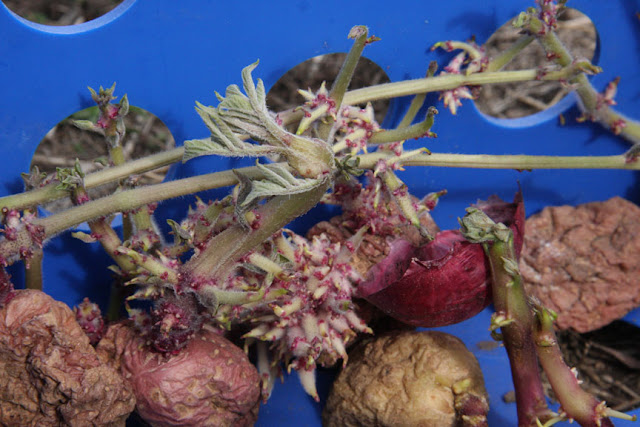 Or, if you are like me you will sometimes get potatoes in your pantry that look like these guys you can use them, if you still have them in there come spring time. This makes less that you will need to buy. That's right I plant these nasty looking things and they will make yummy delicious potatoes.
To be honest, I am pretty sure that these guys are some of the ones that I dug up last year and we weren't able to get to them before they ended up getting all wrinkled and shriveled. So I just left them where they were and luckily they didn't rot. Instead they started to sprout and were more than ready to go in the ground! 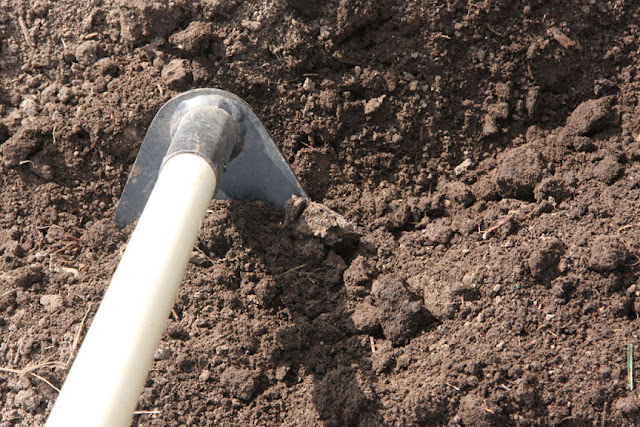 Ok Lets get to planting. First I will till through the area I am going to plant my tatters and whatever else I am gonna plant on that day.
Then I will take hoe and dig a trench the length of the row. 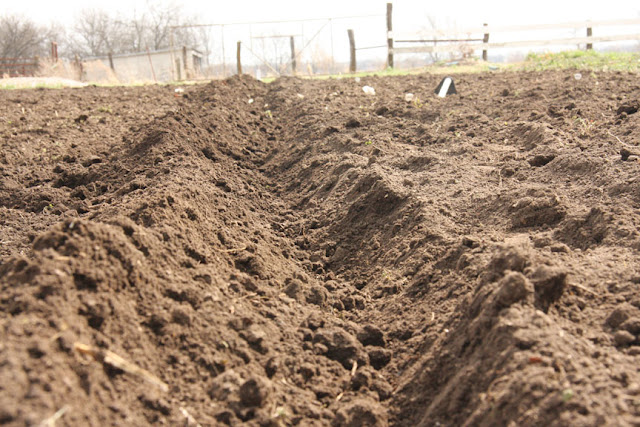 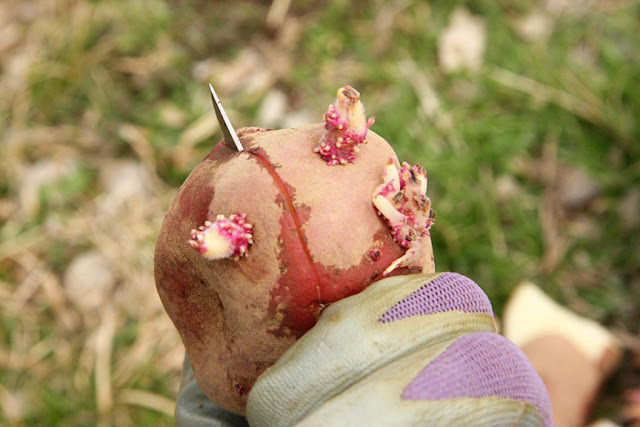 Now lets plant some tatters. First you need to go through and slice your potatoes up. You want to make sure there is at least one eye or little sprout one each section you slice. I usually only cut the potato in half once unless there is a ton of sprouts all over the place, then I might cut it up a little more.
Now, I was watching a show about gardening that was talking about planting potatoes and it said not to cut them because you increase your chance of the potato rotting....
blah blah blah...
I have been helping my momma slice potatoes for planting since forever and we have never had a problem with the potato rotting and shoot my mom grows more potatoes than about anything. (She's married to a farmer and well that and meat is all my dad wants to eat!)
I do remember that my mom would usually slice the potatoes into their pars and then let them set for about 5 minutes or so, that way they could scab over a little and prevent them from rotting. So really you should cut your tatters before you dig your trench so they have some time to scab over. I always for get this until I am slicing the tatter so they usually don't get much time and this hasn't affected them at all. 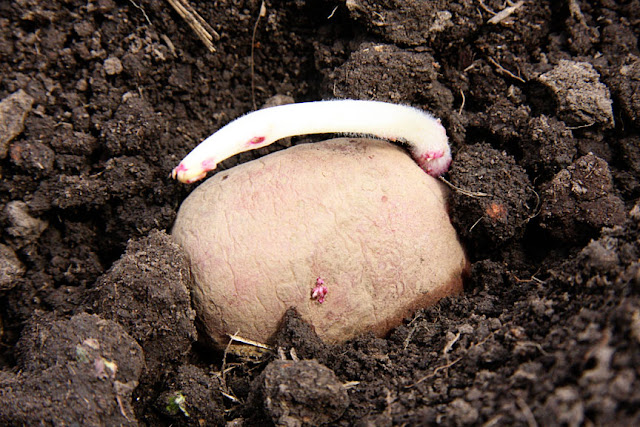 When you place them in the trench you will want to place the cut side down, cause this is the side where the root will come from. 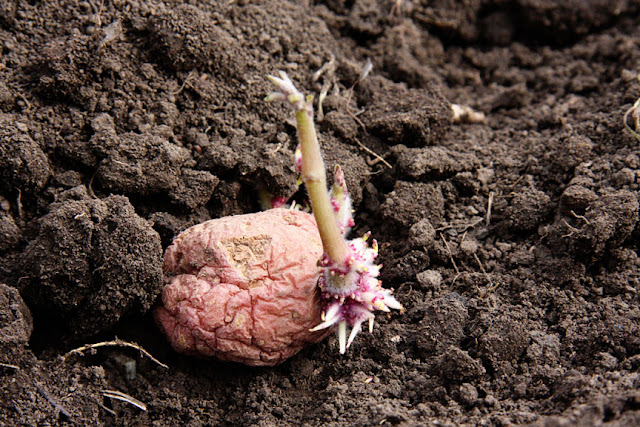 Now when it came to planting these wrinkly things I just sat the whole potato in there cause they were all really small and i had a lot of them. 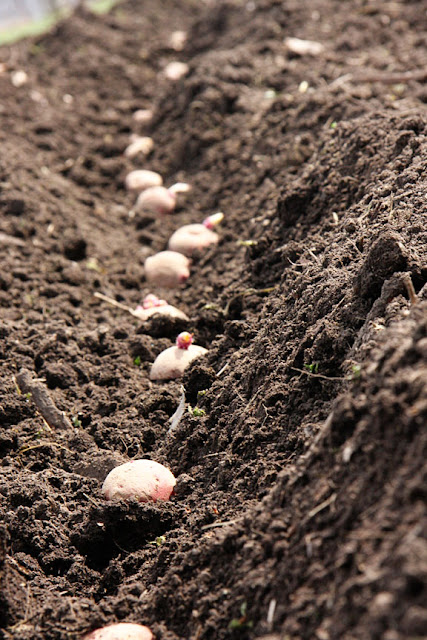 If you notice, I don't have "auto-steer" on my hoe so my rows aren't very strait. Oh well strait rows don't make the food taste any better! 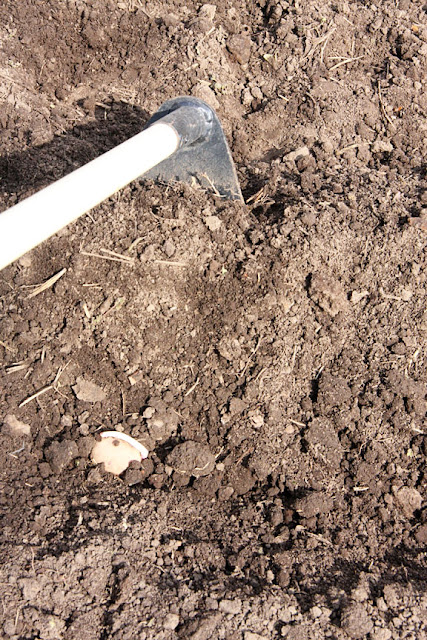 Once you have all your tatters stuck down in your trench just take you hoe and cover them up with all the dirt you removed to make the trench. 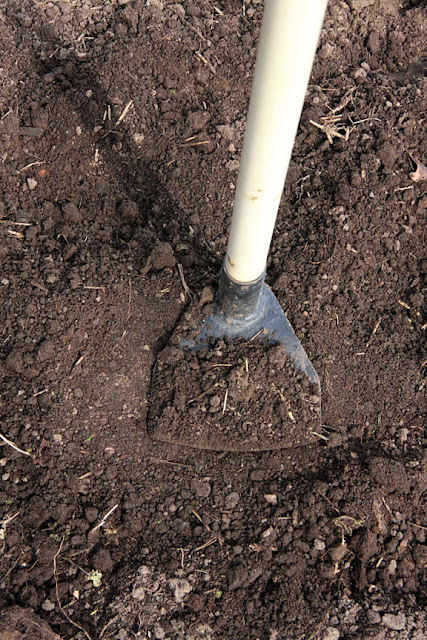 After I have gotten them covered I will take the back side of my hoe and pack the soil down tight on top of my tatter, so they have a firm bed to come up in and so I can tell where my row is.
Now you just have to watch them grow.
Now I mentioned that I had a problem with a fungus called Brown Spot...
I originally thought it was blight, but after doing some research, I found out other wise.
Here a couple of pics I found on the web of both brown spot and blight
﻿﻿
I have not had blight, so I don't know how easy it is to control but as for the Brown Spot that I have gotten it was very simple. I got a bottle of Bonide Fung-onil Multi-purpose Fungicide, and just mixed it according to what the label said and then sprayed according to the recommendations and it took care of it. This stuff also is suppose to work on blight as well. There are other fungicides out there this is just the brand I got.
I told you that I lost so tatters to this, well that was because I wasn't paying attention to them and I didn't get them sprayed until it was too late.
The problem will appear when you have wet or humid growing conditions. So I will have to keep a look out for it here over the next few weeks because it's suppose to be wet.
If you happen to get a bug problem just dust them with a little Sevin powder and that usually does the trick.
As you can see I am not a "All Natural" or "All Organic" person. I use products that have been around for a log time and I just them according to what the label says so I have no fear of them. Now I don't just throw different chemicals on my vegetables just for the fun of it I do it only when it is need. How do you know when it is need?? Get out there in the garden and look at your plants, they will tell you. 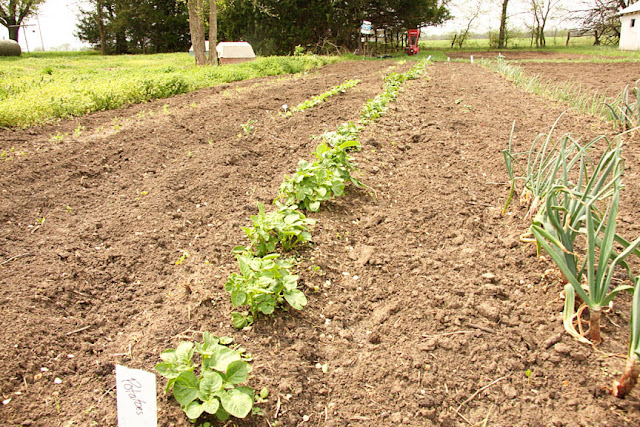 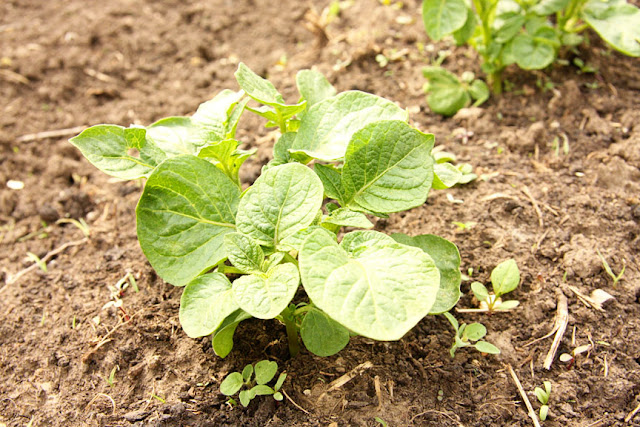 Here's what my tatters looked like after being in the ground for about three weeks. Two weeks after I planted the first row I planted a second row that was just starting to pop out of the ground when I took these pics.  It will usually take about a week before you will start seeing some break through the ground.
Alright that's what I know about tatters if you have any questions feel free to ask in the comments or shoot me an e-mail
jphillipsblog@hotmail.com
Hope you all have a wonderful Easter celebrating the Resurrection of our Lord and Savior Jesus Christ!
Later Tatters,
Janet

Email ThisBlogThis!Share to TwitterShare to FacebookShare to Pinterest
Labels: Gardening