The Joys of Workin' Cattle

So yeasterday morning started off like a normal day...nothing special. I was finishing up some laundary and Caleb was payin' some bills....ya know all the fun things! Well after we got that all done we were headed out to go get some of our cattle in so we could work and wein that calves.


Since it has been so wet I go to put on my mud boots and the insole was pulled out of one of them so as I go to put it back in I feel something fuzzy in the toe....needless to say my hand shot back out of there as fast as it could. I then proceed to turn it over and out fall a nice fat fluffy rat...but at least it was dead. All we can figure is that it had ate some rat poison and then crawled into my boot to get away from the cat. As anyone might say this made a great start to the day.

When working cattle any farmer would say that it is a rare thing to have everything work just the way you want it to. Well, Caleb and I load the truck up with feed and head over the Linabur farm to get our cattle that are over there in. Well of chorus we get there and all the cattle are over on the back side of the pasture...a long way from the lot....but that’s how it always goes. Well he head out to call them in and use my favorite cattle call....the truck horn. Well lucky for us we have cow that is by far the leader of the pack...this fat ol' black-white face cow who is just an ol' rip....but she loves to eat, so she come very easily, and if there is any cow in her way she will head butt it out of her way. (she makes me think of my mom old milk cow Rosie...only meaner!) Well we finally get up to the pen and all the cows go in....but almost none of the calves (and the calves are what we want to get in). Well we don't get the gate shut quick enough and one of the cows escape and her and her calf head for the back forty and a couple of the other calves head off with her....which means we have to go get Caleb's horses....the 4-wheelers. Since a lot of the calves were still there wanting their momma's Caleb and I go in and push the cattle back into the holding pen....I wire the gate and we open the gate to the catch pen thinking the little calves might come in to get closer to their mommas while we off getting the 4-wheelers. Well we pick up Calvin (Caleb's Dad) and the two 4-wheelers and head back to the pasture. When we get there we see a cow by the gate....and we're thinking the cow that escaped earlier was back with the calves....but...there's always a but....it really couldn't be that easy...but when we look at the holding pen we see that there is not a cow left in it....I know I wired it on the top and the bottom....but it wasn't good enough for the big bossy black-white faced cow and her posse....and they pushed the gat opened. Well we drive up to the pen and all that’s let in there is our grandma cow and a bunch of calves, who are eating on any feed and prairie hay that is left. We still have a little bit of corn left in sacks on the back of the truck so Calvin goes and un-hooks the cattle trailer and we start calling the cows back in....by mouth and with the horn. The bossy black-white faced I told you about may scare me more than any of the bulls we have....but one thing that I love about here is when she thinks there might be a slight chance she could get some feed she comes running and that's what she did here....and she brought half the heard with her....thank goodness!!!!!!!! Well we get what we can that way....then we go saddle the "horses" and head out to get the rest of them...and they all cooperated relatively well and went strait in. All of this happened before 12:30....jeepers what a morning. Well we head back to the house and grab something to eat and then head back to the pasture to sort off all the cows...which went relatively easy except for this crazy bull calf who tried to run over both Tim (the hired hand) and I....yea I was glad when we got the the vet and that crazy guy got castrated...haha....that's what he gets for tryin' to run us over. It may have been a long morning, but the rest of the day went relatively smooth.

Workin' cattle is the hardest for me to get pics of cause I am usually in the middle of it all.....but here are a few of what I have.... 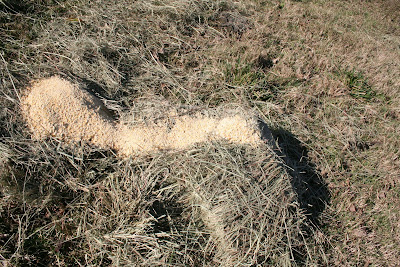 I'm not sure what they see in it...but evidently cracked corn and prairie hay are really great to eat 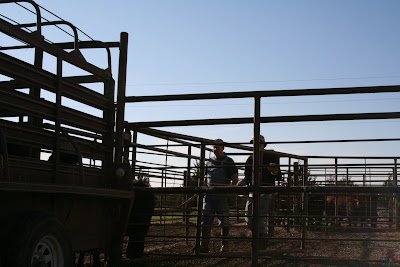 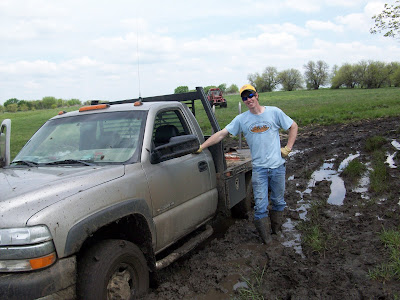 This is a picture from last spring, but it's the best picture I have of my cattle callin' truck.

This is when Caleb got it stuck out in one of our pastures in a spot where it's always muddy....and he has always said "it's rock bottom....you won't ever get stuck here....I was soo glad I had my camera with me when this happened 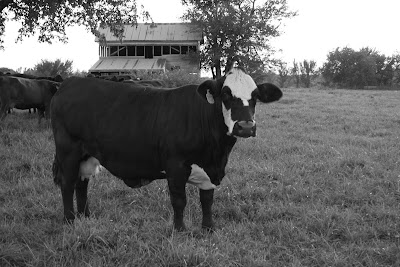 Here's the big bossy black-white faced cow, that you don't want to mess with! 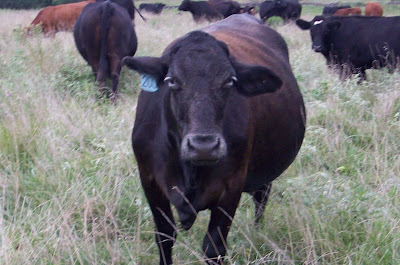 This is our "grandma cow" She is even greyer now then she was in this picture. This was one of Caleb's first cows. There's no reason to get rid of her just yet cause she still gives us a calf. If you look closely at her eyes you can see her grey eyelashes