So the day started out by waking up a few hours late, because Caleb and I didn't get home and into bed till almost 1am and I didn't get my alarm set. So when I finally do wake up and see what time it is, I jump out of bed and get moving cause I still need to put together a few things for the Christmas Dinner we are having at Caleb's parent’s house. At least I am relatively fast in the kitchen...but I'm not very neat when I have to move as fast as I was moving that morning.....so needless to say it looked like a tornado had went through my kitchen when I was finished. In the mean time Caleb had left to go and do the cattle chores. As the morning went a long the weather started making a mess out side....and by the time I left to go over to Caleb's folks house it was sleeting outside....and to make it worse the wind was blowing like crazy and the sleet would pelt you in the face! Well I made it saftly overther and we got to eat and boy was it good....Karen (Caleb's mom) did such a great job with all the food!!

After we ate Aidan finally got to do what he was waiting for all day....OPEN PRESENTS!!! After he and Lexie opened all of theirs Aidan helped open the presents of anyone who would let him. 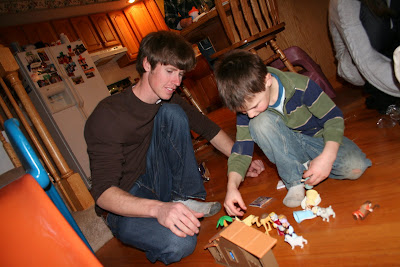 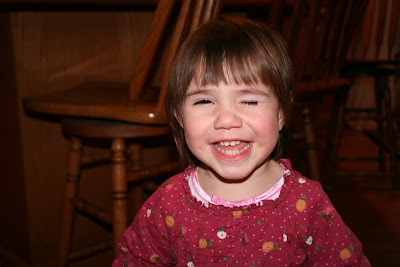 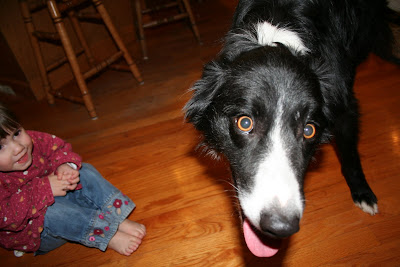 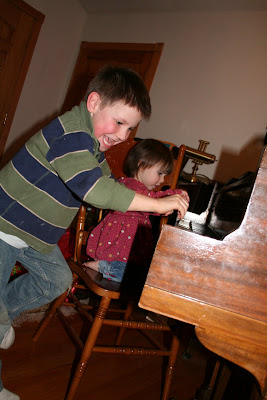 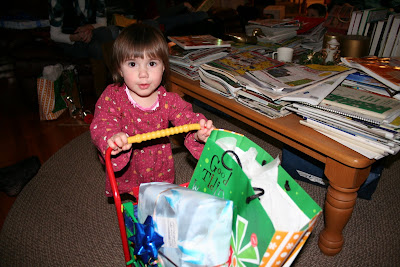 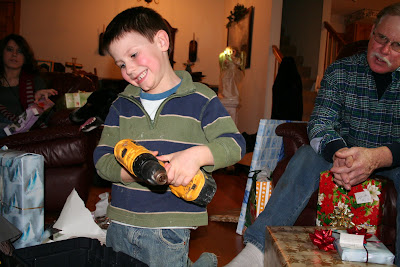 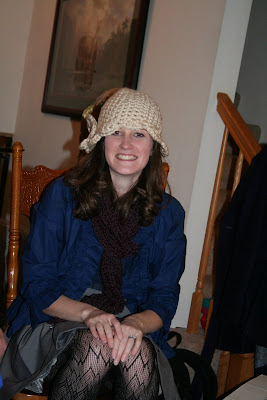 Holly showin' off the new hat and scarf that Caleb and I gave her.

After opening all the presents Caleb went out to check on a cow that earlier he thought was getting ready to have a calf....and since the weather wasn't letting up he wanted to make sure she didn't have problems and that the calf didn't freeze. When Caleb got over to the pasture he discovered that the cow still hadn't had the calf and there should have been some sort of progress, but there wasn't....so we were gonna need to get her in and pull it. So Caleb heads back to his parents to get the 4-wheeler and pick me up, and luckily I just happened to grab my bibs when I was leaving our house, so I put them on, then I change into a pair of old tennis shoes that I keep over there for times like this but not before borrowing a pair of socks from the sock basket in the laundry room....cause all I had on was a pair of no-show socks and when I went out side that wind shot strait up my leg....and boy was it cold!!! I first put on a regular stocking hat, but then Holly reminded me that there should be a ski mask in where they kept the stocking hats, so I search it out and put it on. Caleb then came up with the idea to wear safety glasses since it felt like you were getting pelted with be-be's when you walked outside....of course there wasn't a pair that I could wear so Caleb gives me a pair of goggles instead.....by this point I was looking good.....I got my bib's on, a huge sweatshirt, a ski mask and safety goggles! Well Caleb and I head off to the pasture in the chore truck and as soo as we turn on to the black-top road and are less than a mile away....the truck starts acting funny and the 'service engine soon' light comes on and the truck dies...great, this it just what we needed, it's sleeting we have a cow having problems calving and now truck problems. About a week or two ago the gas gage on the chore truck quit working and we had been gauging when to fill up by how many miles we would go....but you have to include driving in 4-wheel drive and idling...both of which we failed to take into account so we are now sitting in the middle of the road waiting for either Calvin or Pop to come and help. While waiting some guys stop and ask if we need help and then proceeded to call me a boy....ouch that hurt....but in their defense I was wearing a ski mask and looked like a big pile of clothes so the really could tell what I was. Finally help arrived, in form of Pop, and pulled us up to the farm we were trying to get to. Calvin arrived when we did with a little gas but once he got there found out that he need a funnel....so he went off to get that and Caleb, Pop and I headed off to get the cow. We didn't have much trouble getting her in...I mean we did have to chase her, but not for very long...Pop almost ran into the old creep-feeding pen and I had to crawl through a fallen down tree but we made it!! Once we got her in the ally we figured out that she wasn't that close to having a calf....she was still a day or two off. so we decide to lock her up in the barn for good measure and call it a day....cause we were sick of being out in that nasty weather.

Well in the mean time we were suppose to be heading down to Caleb's Grandparents house which is about 20 minutes south of Caleb's folks in normal weather conditions. While we were gone messing with the cow Caleb's mom and sister's were suppose to be deciding if we were gonna go down there or not. Well since no body was ready to go and there were all sitting around....except Karen who was cleaning in the kitchen and constantly asking 'if they still wanted to go' and getting no reply....well I figured that we weren't going, cause it was 6 and we were suppose to be there at around 5:30. After being around this family for almost two years now one thing I have learned is that they are terrible when it comes to making decision. So at 6:30 there was still no decision made so I suggest that we stay cause I really didn't want to get out in this nasty weather again. Well about that time everybody then decided that we were going....soo 30 minutes later at 7 we finally leave to go down there....and 40minutes after that we finally get there! It was a longer than normal trip but we were sure glad we went!!! We had a great time with the Thompson family....there is never a dull moment when your down there!! 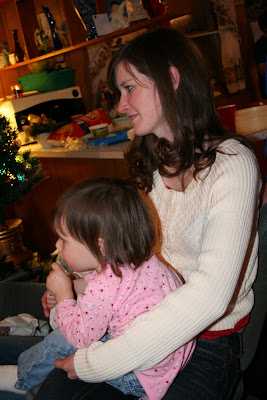 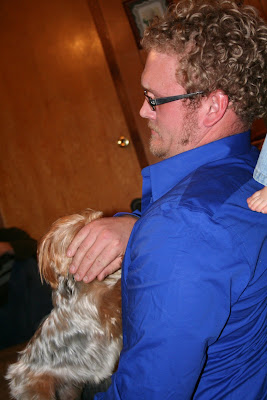 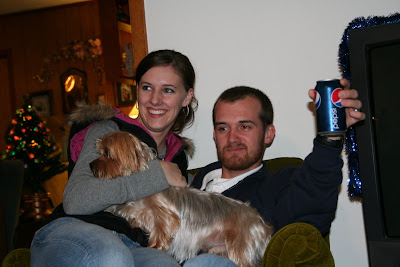 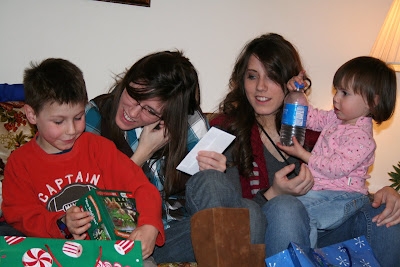 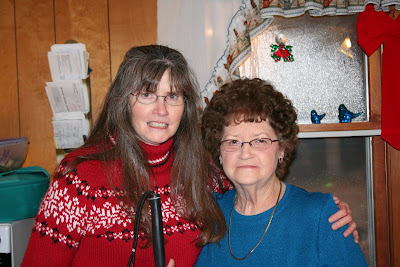 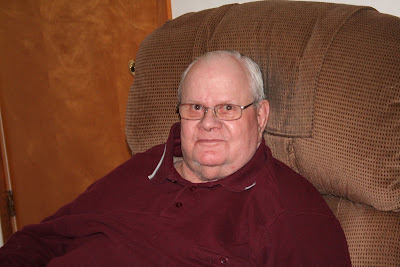 Well after we spend a good amount of time there and then decide to leave and make the 40 minute trip back to Caleb's folk’s house. Then Caleb and I head home and for the fourth night this week we didn't get to bed till after midnight.

Well it is now Christmas day and we wake up to 4, 5, 6 inches of snow on the ground...in my opinion a white Christmas is soo over rated.....unless it is a white sandy beach....or unless you are 10 years old.....cause all it meant for us was more chores to do! Well Caleb finally rolls out of bed and we get to open presents. I am still a little kid when it come to opening presents...I love it...well really I love to watch everyone open the presents that I gave them....there is such a joy in the giving....but also there was only one present for me under the tree and it was one that I bought and wrapped for myself, so it was more of a surprise for Caleb cause he didn't know what it was...it was just a shirt, so nothing special. Well Caleb comes into the living room and walks past the 5ft shinny aluminum ladder with a big red bow, a couple of times be for seeing it....I just laughed. Then he opens the rest of his presents....a new jacket, lots of tools, shirts, K-state license plate, and some framed photos of the farm....I think he was spoilled. 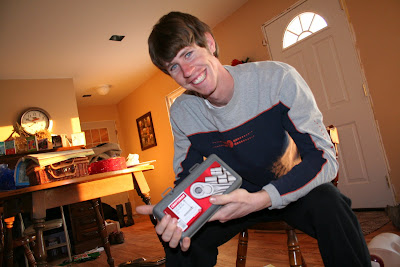 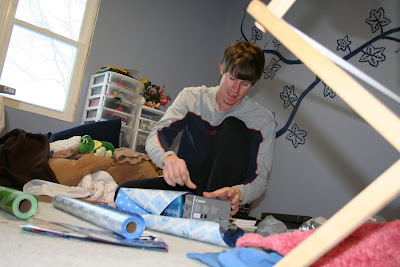 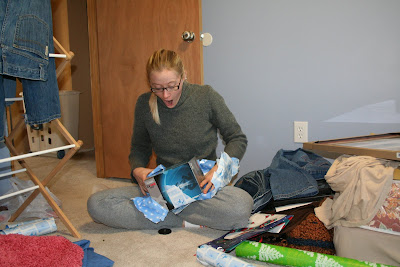 ....I would never have guessed I was gonna get a Canon Rebel Camera.... 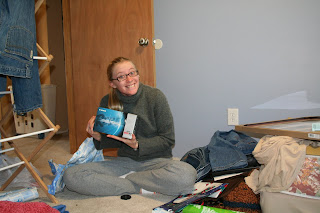 Well after presents we make our rounds...roll out some hay for the cows. Then we go and check on the cow we had locked up the night before and no calf. We decided to let her back out.....wrong decision, so you know this isn't gonna end very good.  Well while we were out there Caleb decides to back through a snow drift that came half way up the side of the truck....not such a good idea...cause now we are waiting for someone to come and help us out again! 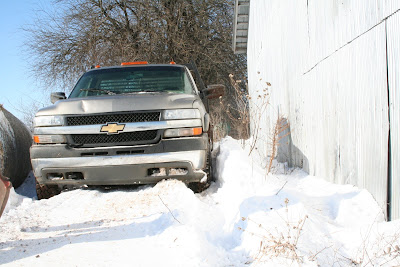 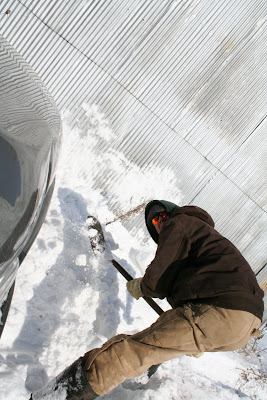 .....but in the end we still needed Calvin to come and pull us out. 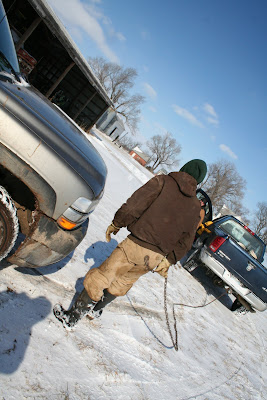 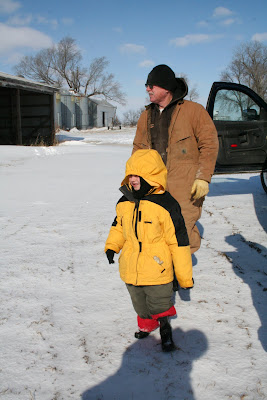 Here's a few of the pictures from doing the cattle chores 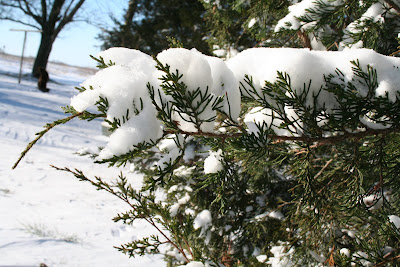 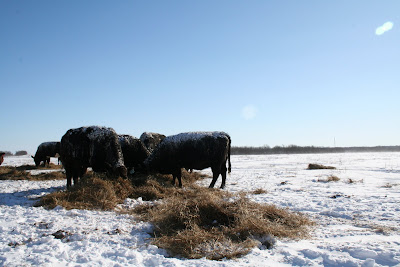 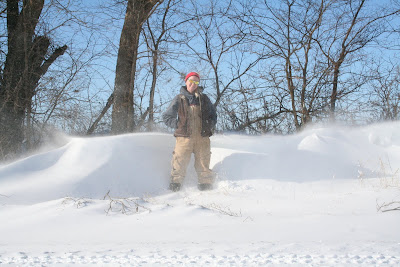 That drift was up to my waist as you can see...but there were a few more around that were probably as tall as I am.....the wind was blowin' the snow all around me and boy was it cold!!! 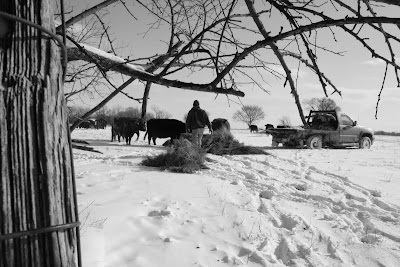 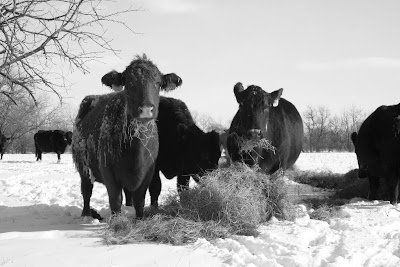 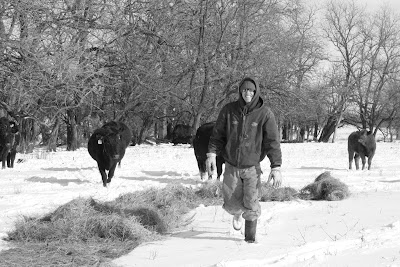 Well we head back to Caleb's folks house and eat dinner and say our good by to his sisters, who were wanting to leave the night before, but got stranded in because of the weather. After they leave Caleb and I head back over to Pop's to feed the Calves....which means we have to clean all the snow out of the feed bunks yuck!!! After about getting the tractor and tub mixer stuck we finally get every thing fed!! So we head back home and get to bed by 10:30...how great is that...but not before finding out that they have changed the time of my family's Christmas from Sunday to Saturday night whenever we get there.

So it's now Saturday morning and I am packing everything up so we can get on the road and head to Northeast Missouri as soon as Caleb gets done with all the cattle chores. Well I talk to Caleb after he has finished two pastures in really good time so we can hit the road early.....yea right...it was too good to be true. Ya remember the cow I told you we let out the day before, we she was about to have a calf and tried to in the night and had trouble...so now I get the call and Caleb said that he had to get her in and pull the calf...oh great...to make it worse the calf was dead when it came out....o-well that’s part of it when you have cattle. While Caleb and Pop were messing with the cow, I got a call to go and help the hired hand...he had gotten the tractor and tub mixer stuck...it took a bit but we finally got him out! So I go and pick Caleb up and we head to the house and get cleaned up and loaded up and finally hit the road! It was a longer than usual trip cause we had to deal with snow about half-way through the trip, but we make it up without any problems. 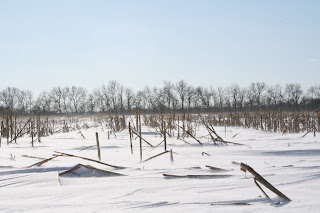 Posted by Janet Phillips at 1:13 PM

Email ThisBlogThis!Share to TwitterShare to FacebookShare to Pinterest
Labels: Cattle, Family and Friends, Life Around the Farm