Reasons why Caleb doesn't like messin' with Cattle and fixin' fence...

This week I would say would not be a week that Caleb would wish to repeat....and it all started on Monday...and like most of my stories it involved cattle.

It was a windy and cold Monday morning when Caleb and I headed out to put out some hay and check all our cattle. While out there we found one of our cows was getting ready to have a calf....so we let her be for now and figured we would check her after lunch to make sure she had it. Well after we ate, Caleb headed back over to check on her and of course....she hadn’t had it yet and she should have. So instead of having me come all the way up from our house to help pull the calf, Caleb goes and gets Pop and his hire hand, Tim, to help. Well, of course the cow didn't want to go without a fight, so Caleb and Tim start chasing her in on foot while Pop stays in our chore truck...the truck without a grill guard....well like they usually do, cow decided to make one last stand against the truck and now we have a busted up grill and a large dent in the hood, oh wonderful!!

Well they finally get the cow in an pull the calf....but not without a little trouble cause the calf's head was sideways....now we know why she was havin a little trouble giving birth. Well they finally get the little girl out....and she was anything but little...she easily weighed 100lbs. Momma goes and starts licking the calf and Caleb thinks he is done for the day....so he goes and gets some hay and feed for momma. In the mean time I am trying to call and find out what's going on...and not getting any answer...I think I called at least a dozen times. Well I decided to head over and see if I can't find him to make sure nothing bad has happened to him....at this point I was thinkin’ he had better have a real good reason for not answering cause I was not to happy to say the least! Well as I was headin' over to the pasture I saw the chore truck turn onto the highway in front of me...come to find out Caleb had lost his phone while chasing the cow around the pasture. I decided to go with him to take the hay and feed over to the cow. It had been almost 2 hours since they had pulled the calf and the long-legged fool still hadn't gotten up and sucked yet...so we decided to go and get a bottle of coloustrum to give her to make sure she makes it through the night. Before we go and get the bottle, we head out into the pasture and I sart callin’ Caleb’s phone…..and amazingly we found it after calling it two times…I think that was one of the few things that went right for Caleb. Well, after we get back and give the bottle to the calf we notice that the momma had not done that good of a job licking her off, so we decided to load her into the front of the truck to warm up and hopefully dry the rest of the way off, cause the poor little girl had already had the tips of it's ears frozen off. Well after sitting there for a while we decided that it would be easier to take the calf up and stick it in Grandma and Pop's garage for the night.
The next morning Caleb heads up to take the calf back to her momma. The calf is still having some problems standing, but he figures she will be fine. Before heading to the pasture he decides to put a tag in the calf's ear....well the little girl didn't like that to much and after that she stood in the front of the truck the entire way back to the pasture. Well while they were heading back she needed to go potty...and when you gotta go, you gotta go....and go she did...all over the passenger door of the truck...Oh that's gonna be fun to clean up. Well after it was all said and done, the calf finally figured out how to stand and how to suck and she's doin' fine!
I dare say that was the end to Caleb's not so good week....after all it was only Tuesday.

On Wednesday afternoon we head out to build fence, so we can turn our cattle out on our harvested bean fields. While out there Caleb proceeded to get the 4-wheeler stuck while trying to pull the sled that was holding the barbwire, through the creek that separated the two fields. In the process of getting the 4-wheeler out Caleb ends up stubbing the thumb on one hand and smashing a finger on the other. We finally get the 4-wheeler un-stuck, but the sled that was holding the wire is still on the wrong side of the creek...so Caleb grabs the chain of the sled and starts pulling it...right off a two foot cliff right into the water of the creek and he splashes water all over his legs. Well, I saw this coming...so when this happened I start laughing uncontrollably...I got a dirty look for this but it was funny. Caleb finally cracked a smile. We finally got finished stretching the wire but not before breaking it...but that was an easy fix. Now all that's left to do is put up a few more post and it will be all ready for the cattle. Now I think I know why Caleb hates messin’ with cattle and hates fixin’ fence! 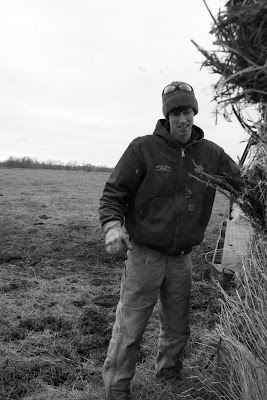 Caleb puttin' out a bale of hay 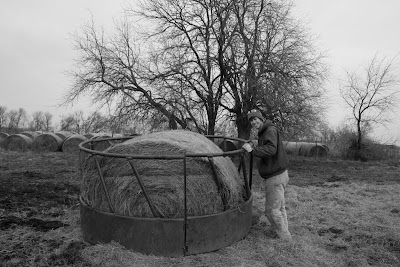 I made him stop and smile at me for this one 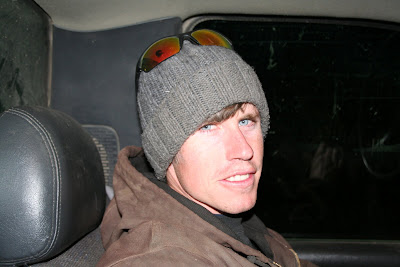 This is the dirty look I got when I blinded Caleb with the flash....we were sitin' in the truck waitin' for the calf to warm up 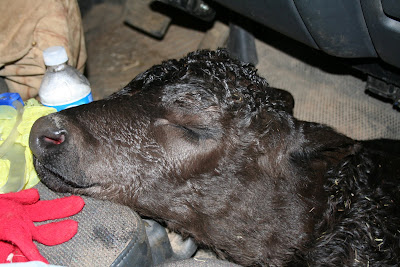 Here's the little girl just soakin' up the warmth. 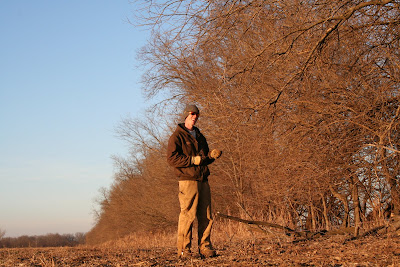 I think he was hollerin' at me for not helpin'....but somebody has to take pictures!! 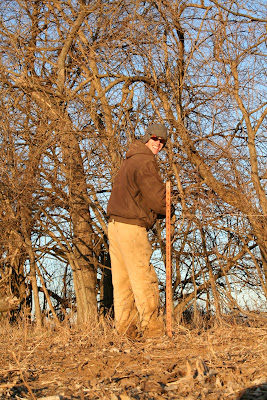 I told him I wouldn't stop takin' pictures until he gave me a good smile!

Posted by Janet Phillips at 6:03 PM