So a little over a week ago we finished up shellin' all our corn, and boy were we all glad it was over. Not because it was a bad year, to the contrary it was a great year. The corn did great and we broke all sorts of records. Not just on our farm, but neighboring farmers also did just as good.

We were glad that harvest was finally over with because we had been hoppin' (or goin' which ever you prefer) since day one and hadn't had much of a break. I mean we would take Sunday off as usual, but it still seemed that we would have things going then and wouldn't get much of a break.

So we finally got it finished, but not with out a few hiccups along the way. We had combine problems, tractor problems, grain cart problems, and more than one problem with the semi, but God was still takin' care of us and even though we had to slowed down every once in a while we never had to come to a complete stop and that is wonderful.

Now I know some of you come from corn pickin' areas but there are some of you that haven't ever been around it so hopefully you can feel what's it's like to be in the middle of corn harvest. 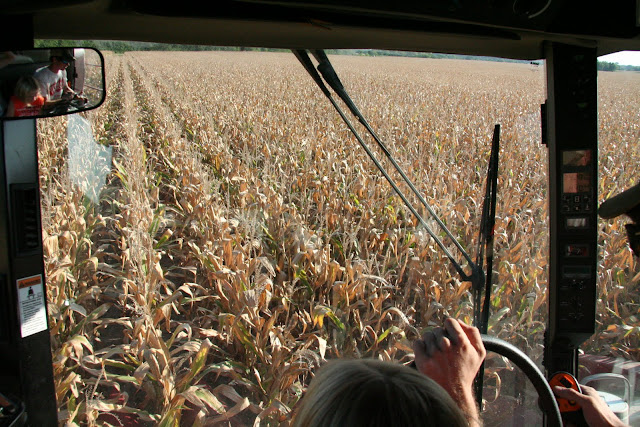 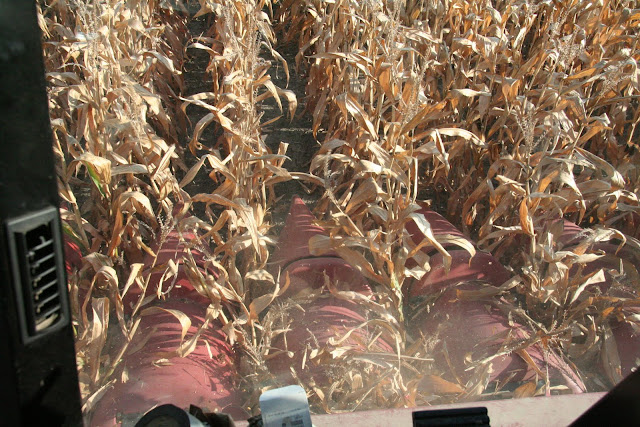 As you go across the field in the combine, you split the rows with the snouts and depending on how big your header is you can take any where from 4 to 12 rows at a time. On our farm we have a 6 row and an 8 row.
The header is designed strip the ears off the stalk and to leave most if not all of the stalk in the field. 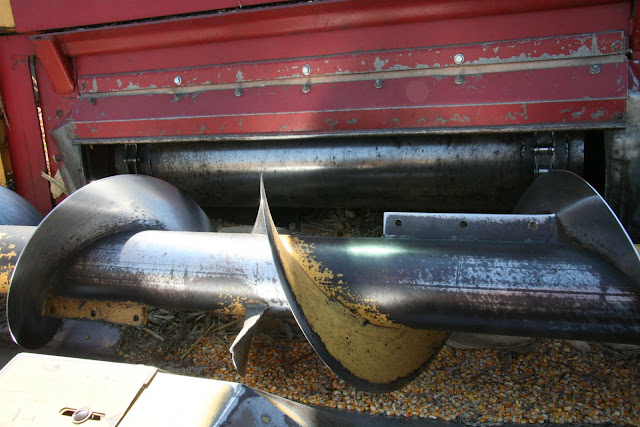 The ears are then pushed to the middle of the header with the auger at the back of the header. It is then fed into what they call the "feeder house".
Once it is inside the combine the kernels of corn are striped off the cobs and... 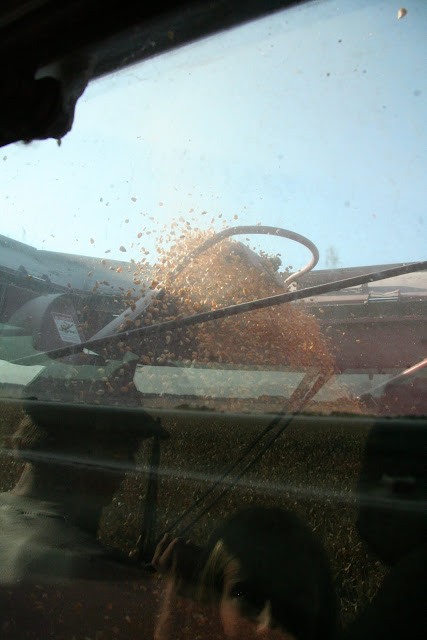 ...they are augered into the hopper that is just behind the cab. 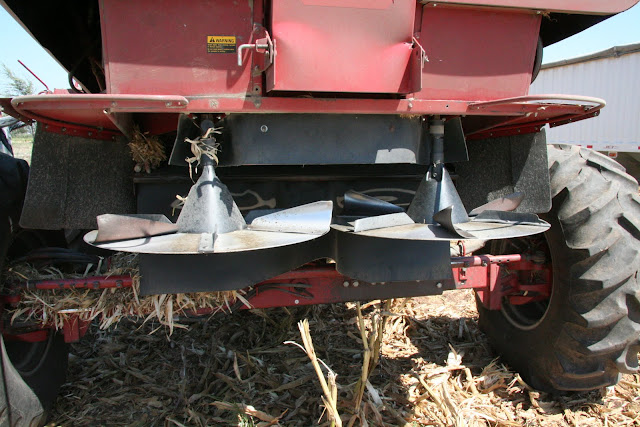 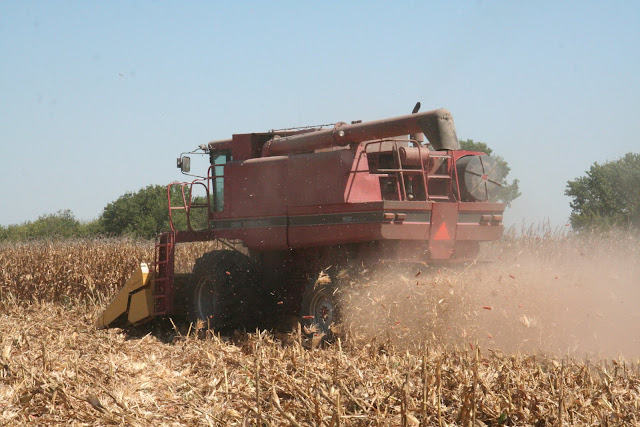 The cobs the rest of the 'trash' are then send flying out of the back end of the combine. You should stand clear of the combine, cause more than once I have been hit a flying corn cob. 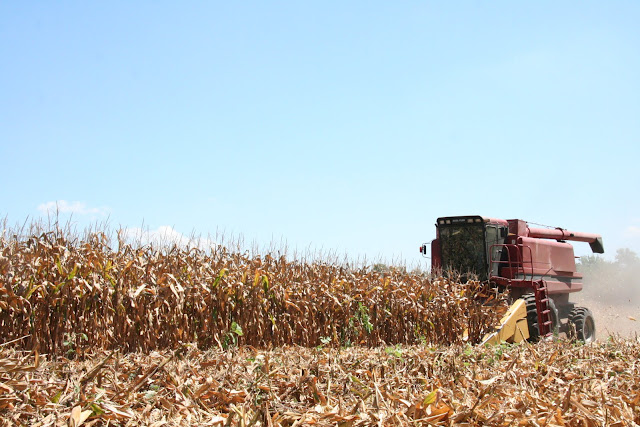 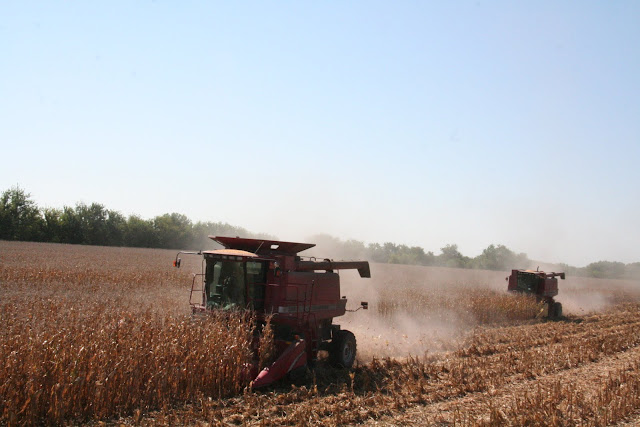 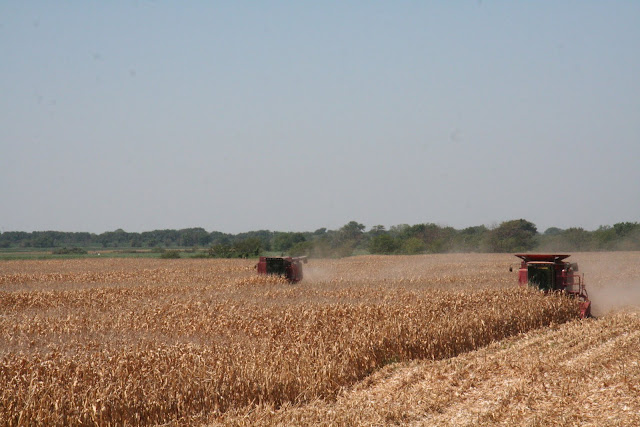 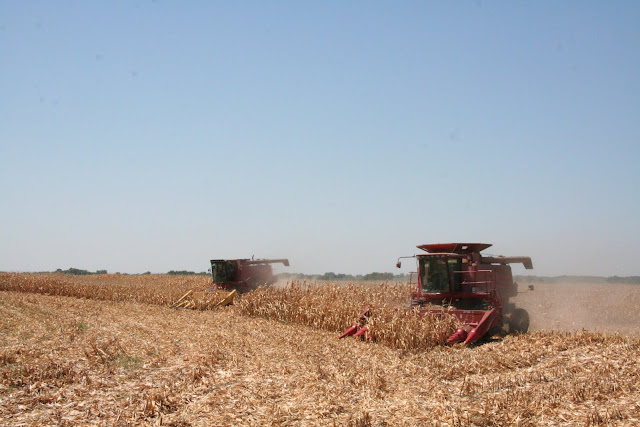 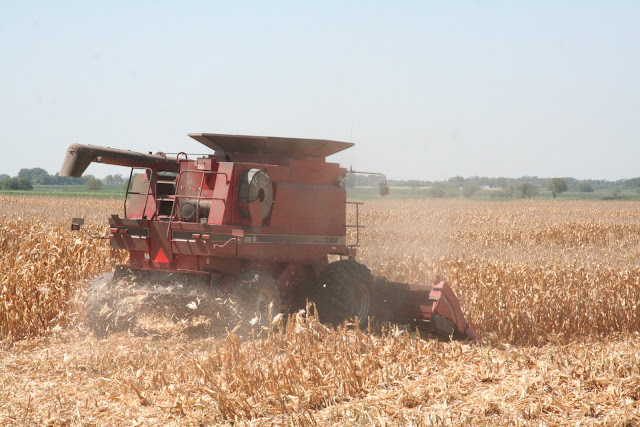 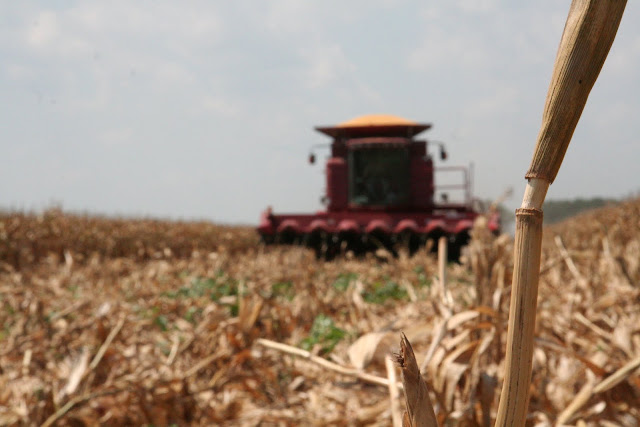 The combines would have to make the long haul across the field to unload, since our grain cart was down for most of the harvest. 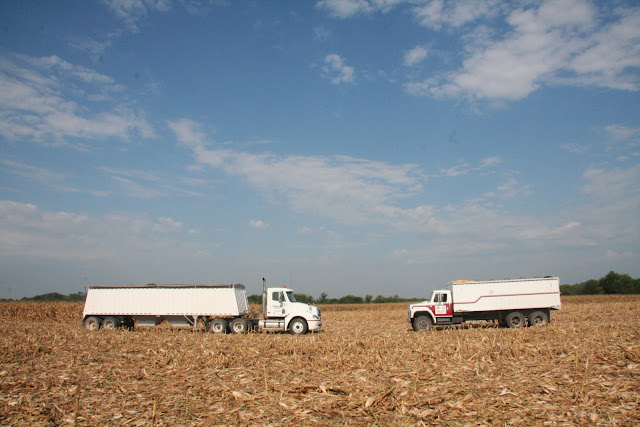 Since it was a lot drier during corn harvest we were able to drive the trucks out on the already harvested corn stubble, so the combines wouldn't have to drive as far to dump. 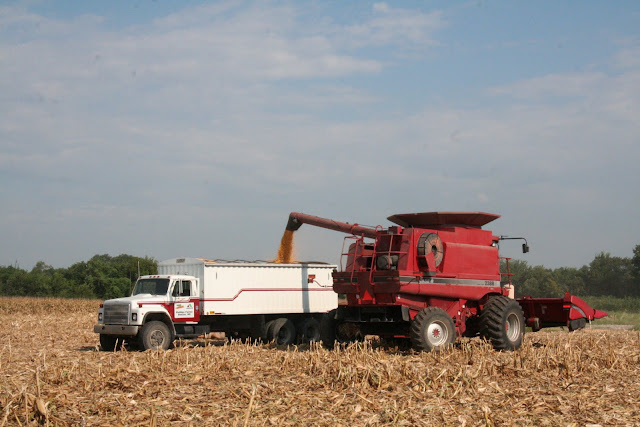 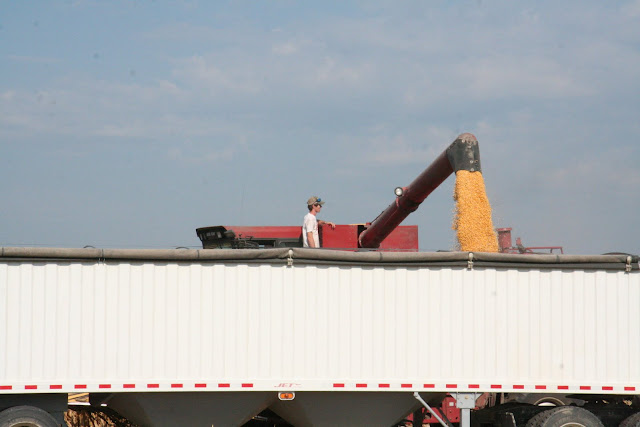 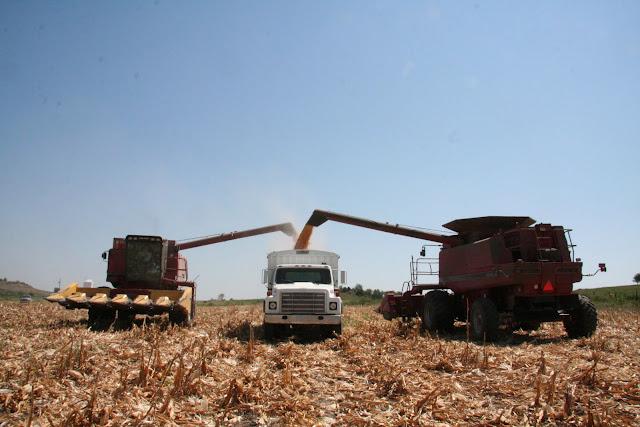 Occasionally you would get both combines dumping on you at the same time. Usually this would happen when they had wait on a truck to make it back to the field. 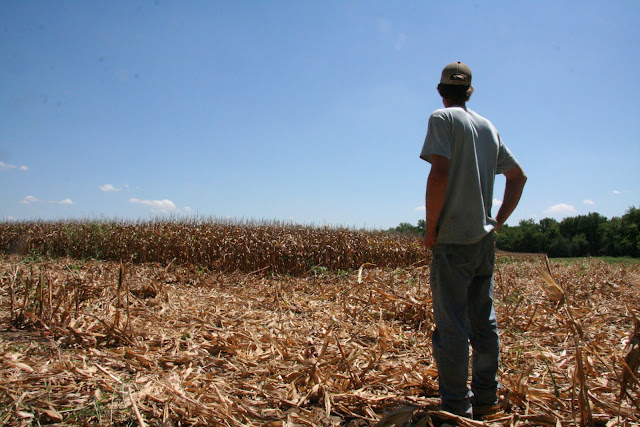 While waiting for the truck to fill you can sit back enjoy and read a good book, take a nap (this rarely happened) or just watch the harvest take place. 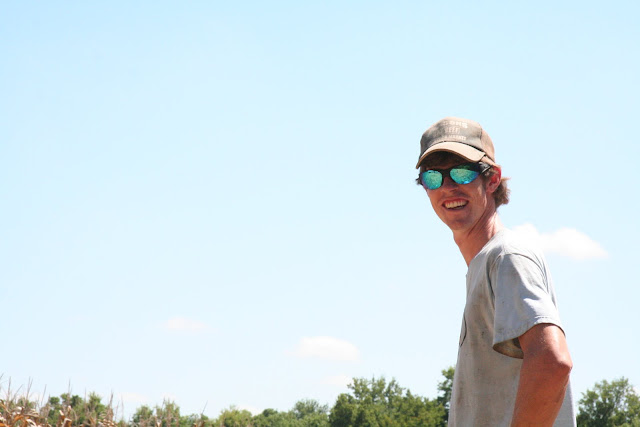 Caleb loves watching the combines go. Usually he would crawl in the cab of one of them and ride along. I usually didn't get to wait for for very long, so I would take some pictures and do some readin'. 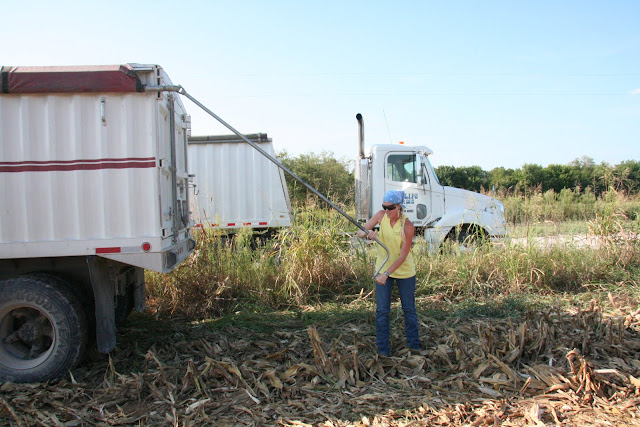 Once they had you full then it was time to roll the tarp over the truck... 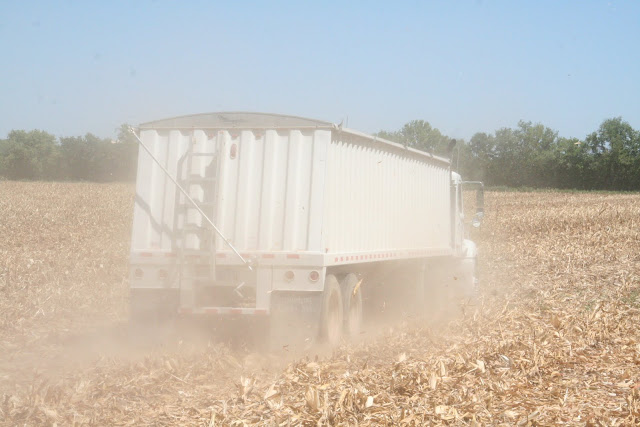 ....and speed of to unload.  Some times to the grain elevator or the grain bin.
Since this is already a long enough post I will cover the grain haulin', unloadin' and the use of the grain cart in my next post.
As for me, I am feeling loads better than I was last week, so I am gonna get back to getting things straightened up cause we are FINALLY getting the trim in the house installed tomorrow....it'll take more than a day, but he's startin' first thing in the morning!
Later All,
Janet
Posted by Janet Phillips at 2:52 PM

Email ThisBlogThis!Share to TwitterShare to FacebookShare to Pinterest
Labels: Life Around the Farm, Row Crops