First thing this morning I went out and moved my soaker hose from my green beans over onto my tomatoes. The hope is, I will have tomatoes running out my ears before to long. Caleb has been going around trying to get a hydraulic hose fixed on the baler. While he was workin on the baler I took off with my camera and got some pics of the old milking stalls in our barn. While out there I discovered the sick cow we had been doctoring died. Nothing lives forever...it's a harsh reality that you have to face more often then most here on the farm. But you also get to see so many more new births of animals that it keeps you from constantly thinking about all the bad times.

For dinner today we had leftovers with a fresh garden tomato sliced up....Yuck...I love growing them but I hate to eat them! I also cut up a watermelon that was given to us from Caleb's uncle Ben. I was told it was a "seedless," but when I cut into it, the watermelon looked like it was grown just for a watermelon seed spitting contest. 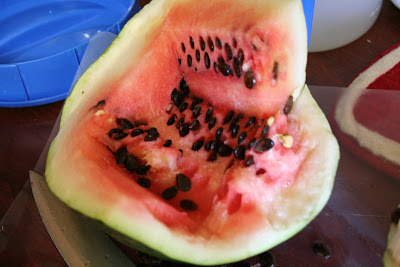 On Thursday night we Caleb and I went to a field day which was held by our local seed dealer. It was a good meeting but like most people we really came just for the food. I think Caleb got a lot more out of the meeting than I did. After we went through all the corn varities I started getting a little bored so I bot my camera out a started taking pictures. 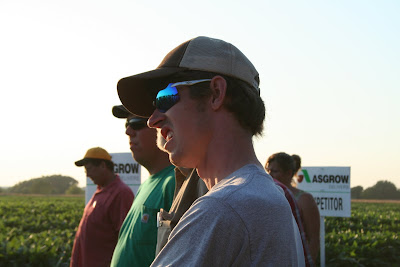 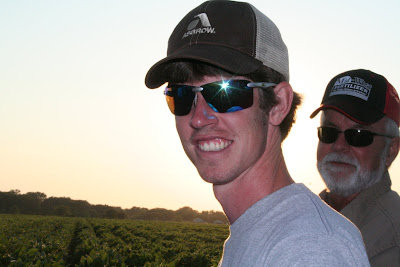 Caleb and a good friend of ours. David is acutally trying to back out of the picture, butI still managed to get him. Some of the beans we were looking at. They were a lot taller than ours, but they were also planted a lot earlier than ours and have gotten a little more rain than ours! 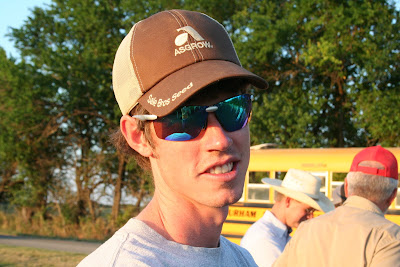 Caleb getting sick of me taking pictures of him!
Posted by Janet Phillips at 1:06 PM

Email ThisBlogThis!Share to TwitterShare to FacebookShare to Pinterest
Labels: Life Around the Farm