Yesterday day we were planning on selling all the calves that we had weined back in the spring as well as the ones that were weined two weeks ago but when the day started I wasn't sure what was gonna happen...here's the story...
So the day actually started at about 1 o'clock in the morning when I was woken up by a loud clap of thunder and an bright bolt of lighting. I roll over and nudge Caleb to remind him that the grain truck full of wheat is still out side over at his folks house and someone probably better get it into a shed. So after about 30min of tossing and turning Caleb finally decides he had better call his dad to tell him to get the truck in the shed. So finally after the wheat was takin' care of, we were able to go back to sleep...well kinda, it thundered and lighting all night so not completely restful sleep, but it was sleep! We wake up thinking that it hadn't really rained to find that it actually had rained 6/10th in and was still trying to rain.
Well today is sale day, so we get up and get dressed throw our mud boots on and a rain jacket and head out to get all the calves in. well of course as soon as we walk outside it starts to rain even more. Well we get all but three of the calves in and and at about that time the guy who is hauling the calves to the sale barn for us shows up so we go ahead and load him up with a load...and remember all this time it is still raining. With the first loaded on it's way, we decide to get the 4-wheeler out and go after those other three calves that didn't come in. Two out of the three came in with very little effort...I can't say the same thing for the third one. Caleb takes off chasing it on the 4-wheeler and well that was one crazy calf. I had originally thought that it would go in really quickly that was until we get the calf up there by the gate and he takes off again at lightning speeds across the pasture and nothing was gonna stop him...not even the pond. That calf dove in an swam across in no time at all!! After that Caleb and the calf went all over the pasture....but the happy ending...we finally got the crazy guy in and sold thank goodness!! In the two and 1/2 hours we were out messing with the calves it rained another 4/10th's in and of course when we were all done so was the rain. By then I was soaked to the bone and very cold.....I was so glad to get into some dry clothes.
At the end of the day the calves sold relatively good for the way the markets have been and now we won't be going through near as much feed!!
Here are some of the pics that I have previously taken of our babies. 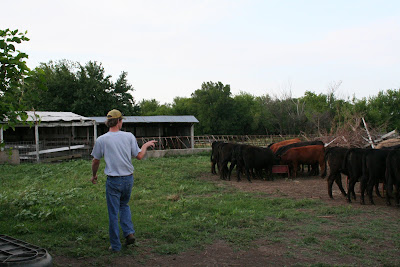 Caleb is counting the babies to make sure they are all up eating and none have escaped back in with their momma's....... 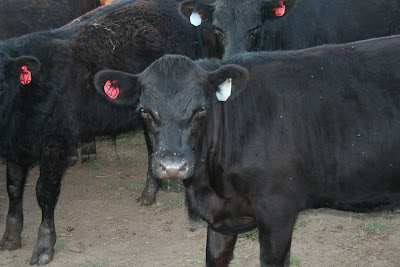 How about my close up now 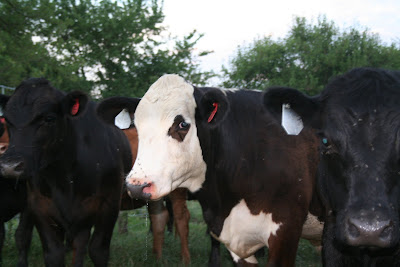 good ol' Micky...oh how I will miss this cute guy. 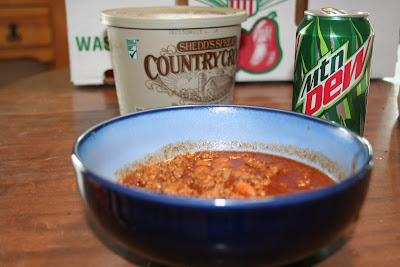 Since I was soo cold yesterday morning I thought a good bowl of chili sounded good for dinner!!
Posted by Janet Phillips at 10:06 AM