What to do when you have tomatoes coming out your ears......

So this year I was finally somewhere that I could plant my first solo garden. I really haven't done much in a garden since the summer right after my freshman year of college when I moved back to mom and dad's and helped with my mom's garden there.....so it's only been seven years. So after we finally got moved into our house and I finally got the ground tilled up where I was gonna put my garden, I could start planting my veggies. When I got to planting my tomatoes I did what I have always done....plant two full rows through the garden. That's what your suppose to do right??? I mean that's what we always did going up. The main difference between now and then is....back then there were six people in that house and five of them loved eating tomatoes....and now there are two people living in this house and only one of them loves eating tomatoes and it's not me. So you are probably asking yourself....if she doesn't like tomatoes then why is she growing so many?? If you think like my dad then, first I'm sorry ;) and second you would tell me I'm un-American since I don't like eating a fresh garden tomato with salt on it. The thing is I will try a bite of a tomato every year and every year I think they are gross. Now if you were to take that same tomato, cook it and and some other ingredients into it I would love to eat it.....it's just those fresh raw tomatoes that I can't stand to eat.....yet I still plant enough to feed a small country. O-well I love to grow the nasty things and then make all kinds of good things out of them.....especially yummy salsa!!! 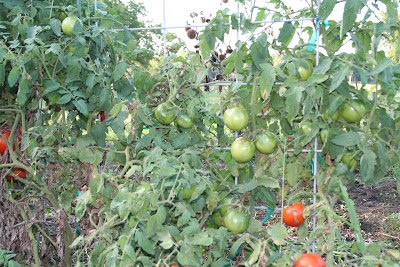 This is just part of one plant that as you can see is fully loaded with some good ol' maters!! 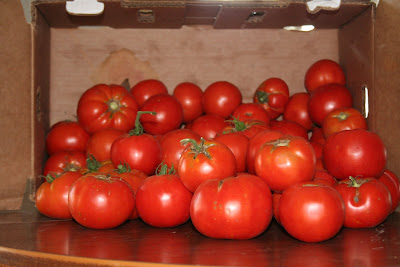 Here is some of the first tomatoes that I picked. That is a box that I got about 26 lbs of peaches in and it worked great for tomatoes.....I guessed that I would have 20-25 lbs each time I would fill it and I have filled it at least five maybe six time so you do the math.....that's a few tomatoes!!! 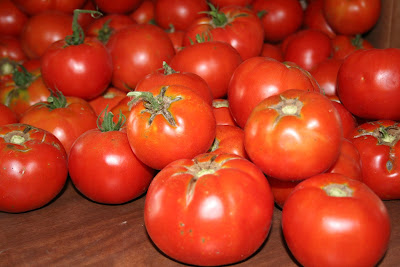 The first ones I got to picked were soo pretty.....the ones got a lot of rain on them and they started to crack more.....but when you are making tomato juice and salsa does it really matter what they look like...not really!!

So with most of my tomatoes I have been making salsa....cause I really like salsa. I have been trying to find the best recipe for it and well I think I know what all to put in to it.....it's the different amounts of each where I have the problems cause I really don't measure but I will try to give you the recipe as best as I can! 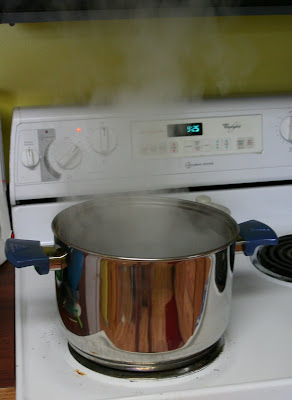 You start off will a lot of tomatoes.....and this is for a big batch of salsa.....enough to do a canner full of 9 pint jars.....I used about half of my peach box....so 10-13lbs of tomatoes. I really just started cutting the cores out of them and when I thought I had enough I stopped. You need to remove skin from all the tomatoes....and the easiest way to do that is by blanching them....and for those who don't know what that is well.....it is when you take the tomato and place it into boiling hot water for about 30sec or until the skin starts cracking....and then you take it out with a slotted spoon and place it into ice cold water. After that the skin will pretty much just fall off. This process can also be used with peaches.....which is great when you are wanting to do a batch for frozen sliced peaches.....yum yum.....the best with a little sugar on top.....if you were are mine and Caleb's wedding last year then you would know what I was talking about!!! Anyways back to the salsa.....you need to take the core out of the tomatoes and take the skin off.....it doesn't matter which order but it's a lot easier before they are skinned cause they are not as slimy!! After you have the skin off you need to get all the seeds out....the only reason for this so your salsa isn't super runny and juicy. If you leave the seeds in it will be more like tomato juice than chunky salsa. this would have to be the worst part of it...it takes forever....so put the radio on a good station or put a good CD in and get to work!! The way that I get the seeds out is by cutting the tomatoes in to quarters and then use a spoon and dig out the seeds. 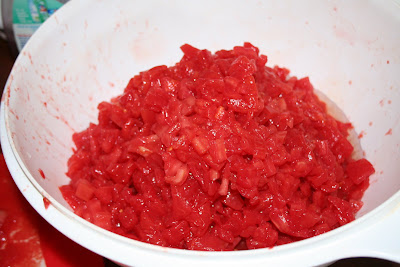 Then after you get all the seeds out you chop the tomatoes into chunks.....it's at this point that you realize there is not near as much as you thought there would be. 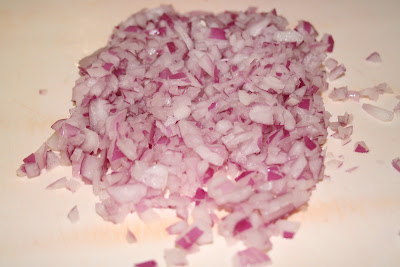 Next I always go to chopping up the onions.....for a batch this big I always use 2 medium red onions. You want to finely chop them.
If you have ever done much with red onions then you know they will make your eyes burn an water like crazy when you start to cut them up.....something that mom and I have figured out is that if you wear contacts while chipping them up they really don't bother you.....but for those that don't wear contacts all I can think of is getting a pair of swimming goggles or some other type of goggles to wear cause it is terrible other wise.....or if you have a food processor...which I don't that would work great for chopping up all these veggies.... and things would go a lot faster too!! 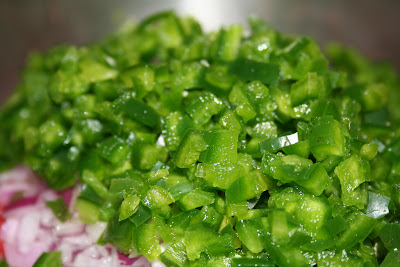 Next I use 7 jalapenos. Cut the tops off and then cut in half. After cutting in half use a spoon to take all the seeds out. If you want a little bit of a kick use the seeds from 1 1/2 peppers and that will give you just the right amount of bite.....but if you are like my mom and husband than you don't want to use any of the seeds and it still tastes great
next you you will want to mince 4-5 cloves of garlic
Next you will want to juice 4 lime and put this in the mix....it probably is about a 1/4 c .....I add the pulp too cause it's not gonna hurt anything.
You also need to add in salt....about 3-4-5 teaspoons.....whatever you think tastes good!
After that I will mix all these together and then cook them on medium heat for about 10 min stirring occasionally. 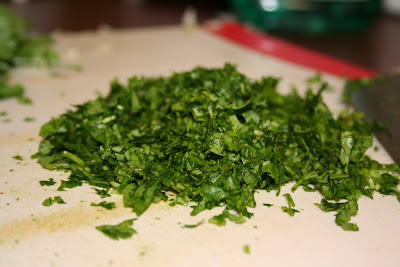 Than after the 10 min I add in about 1/4 - 1/3 c cilantro that has been finally chopped. You will also need to add in about 1 - 2 teaspoons of oregano and about 1-2teaspoons of cumin. You might want to taste along the way to make sure you like what you have.
After you have added everything in then cook it for another 5 min then start putting it into jars and place it in the canner at 5 lbs of pressure for 7min. now if your not going to put it into a canner then you might want to cook it for another 10-15 min after adding the last few ingredients. 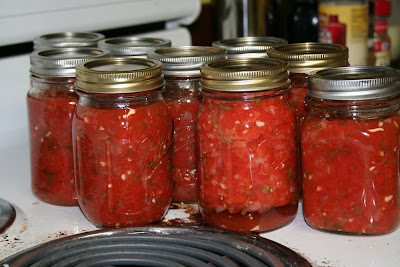 Now all that's left to do is get you a bag of good tortilla chips and something good to drink and have you a snack!!
if ya got any question on it just ask me!!!
Posted by Janet Phillips at 9:00 AM

Email ThisBlogThis!Share to TwitterShare to FacebookShare to Pinterest
Labels: Cooking With A Farm Wife, Life Around the Farm