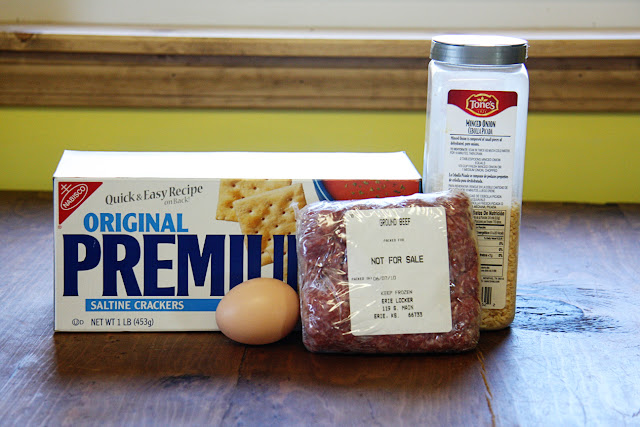 Roll Call: 1 lb hamburger, Minced onions, 1 Egg and Saltine Crackers. (There are a few other options we will talk about later) 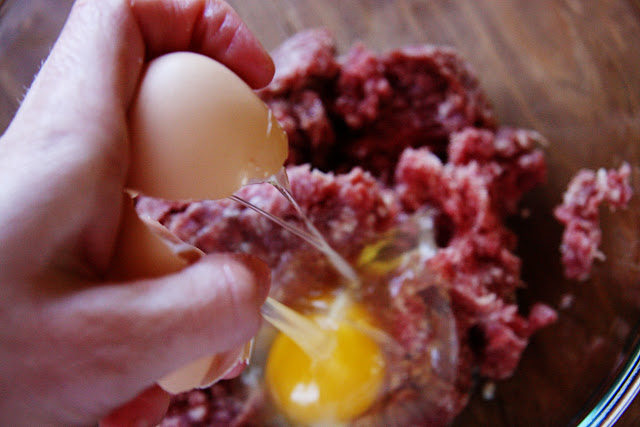 Thaw your hamburger out and place it in a medium to large mixing bowl. 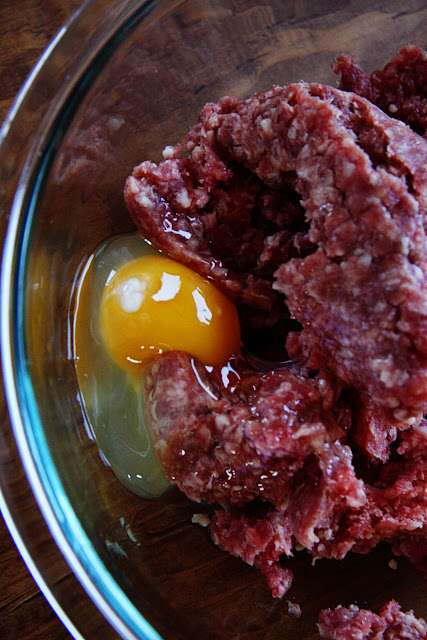 Crack in one egg. 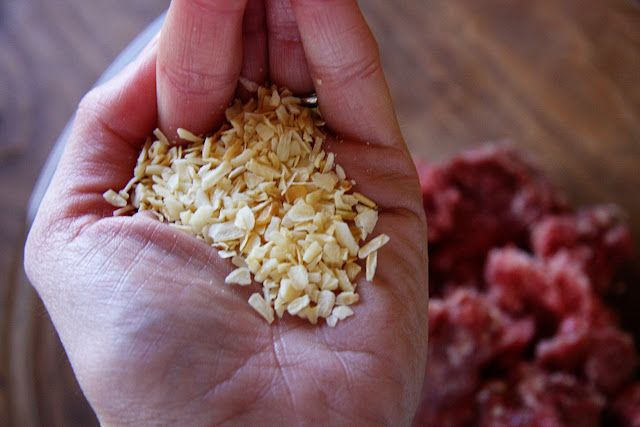 Now add in the onions. I use dried minced onions that I get from good ol' Sam's Club and I use probably three tablespoons of so. You can also use a fresh onion and about 1/2 of a large onion would work just fine. 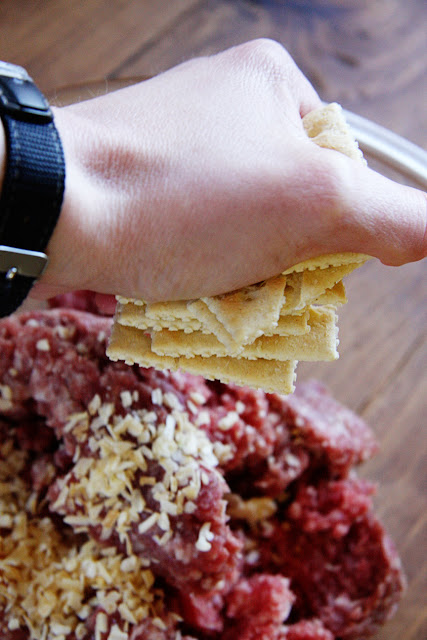 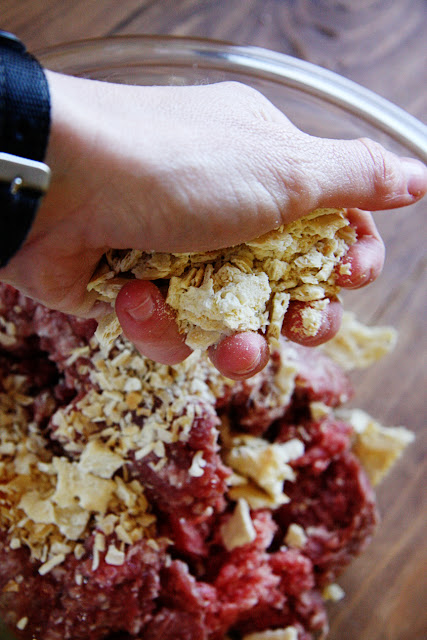 Now take about half of one of the tubes of saltine crackers and crush them all up. If you have small children who like to help this is on of those things that the can't mess up!
*You can also add a chopped up bell pepper to this and it would be delicious. I don't add them because...well lets just say we don't play nice together....it's not pretty, not pretty at all!
*Also Caleb tells me that his mom uses oatmeal instead of crackers so that is another option.
I also add in a couple of pinches of salt and pepper at this point. 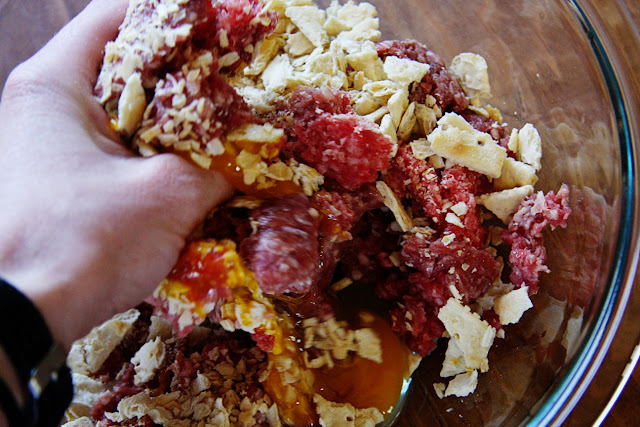 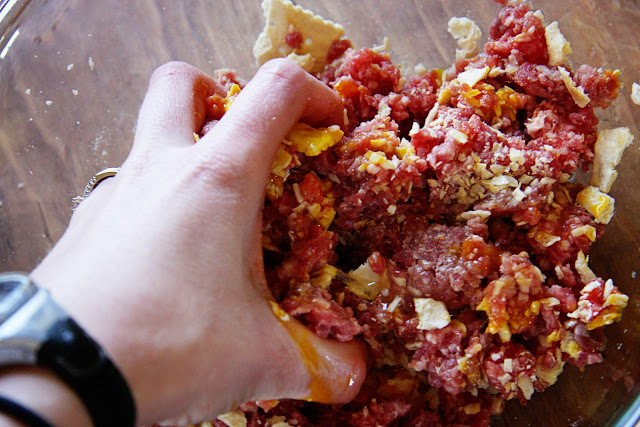 Now it's time to get dirty sand do some mixing. I usually use both hands but I couldn't get a picture that way.
This is also one of those things that kids would love to do!
Mix it till you have everything fully combined. 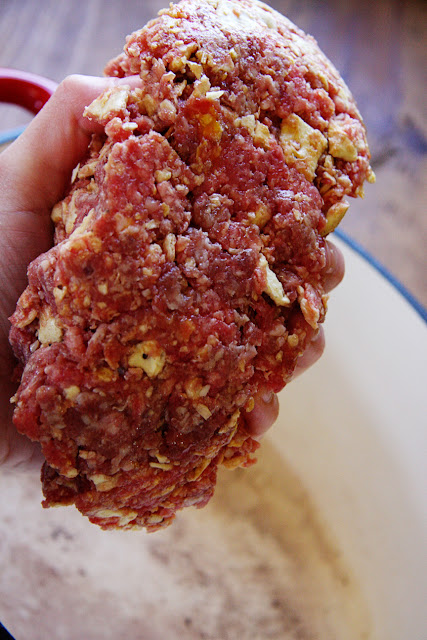 Then form it into a loaf and... 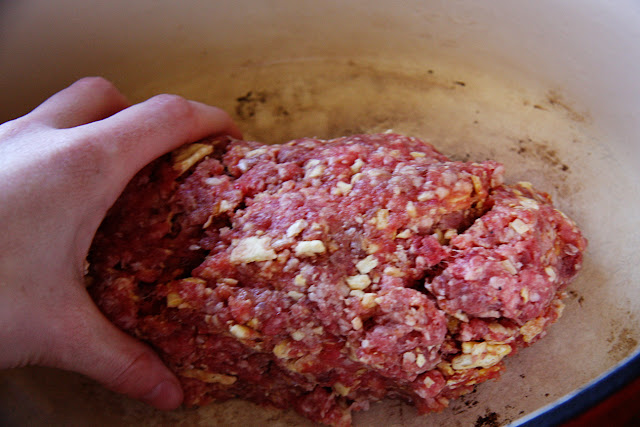 Place it into an oven safe pan. 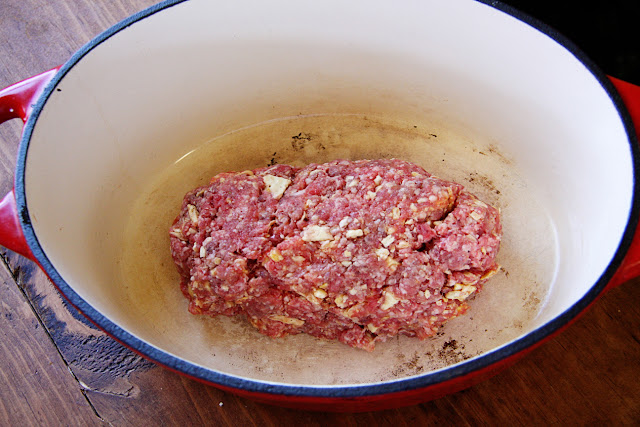 I like to use my dutch oven for this, but you can also use a cake pan as well.I like having a lid on mine for most of the cooking because I think it gets too crunchy without a lid. 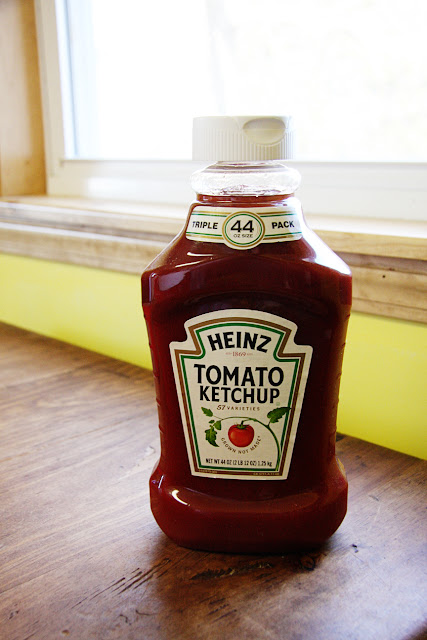 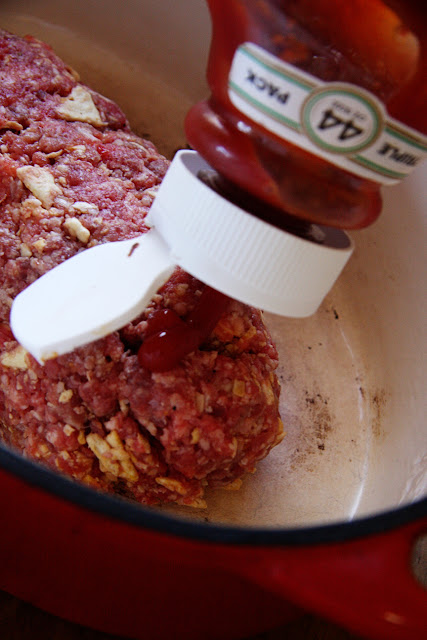 Next I will take a bottle of Ketchup and squirt a little of it on the top. 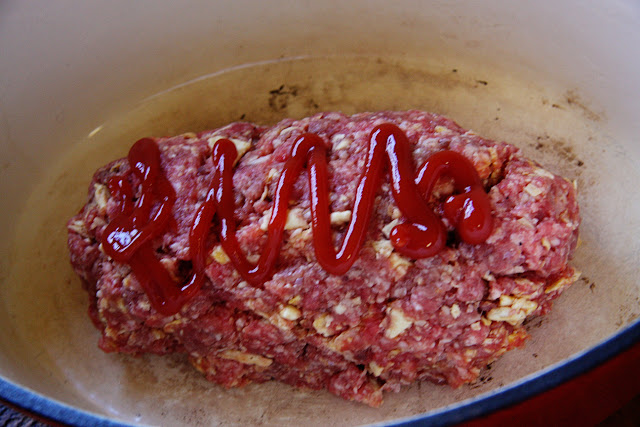 I try and make it look pretty, but it usually looks like a mess...
O-well it still tastes good!
You can also put a couple of strips of bacon across the top instead or in conjunction with the ketchup. I didn't think about this when I was making it otherwise I would have done this.
*You can also chunk up some potatoes and place around the meatloaf to cook while it's cooking for an easy side. I'm not doing this today, because I have some leftover mashed potatoes in the fridge and I'm gonna use them instead. 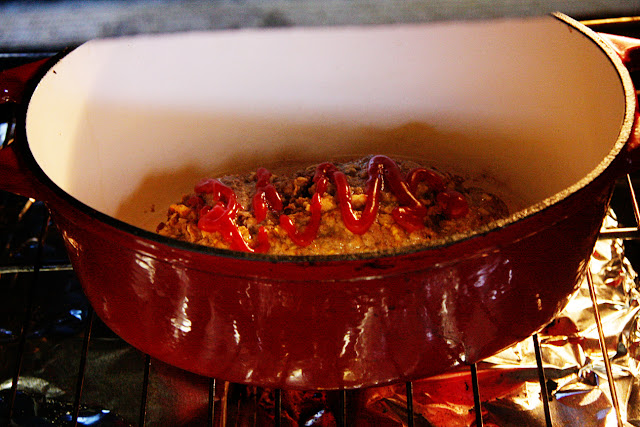 Now place it in a 350 degree oven and cook for about an hour. For the last 10 minutes I will take the lid off of the pan. This allows it to get kinda crunchy but not overly done! 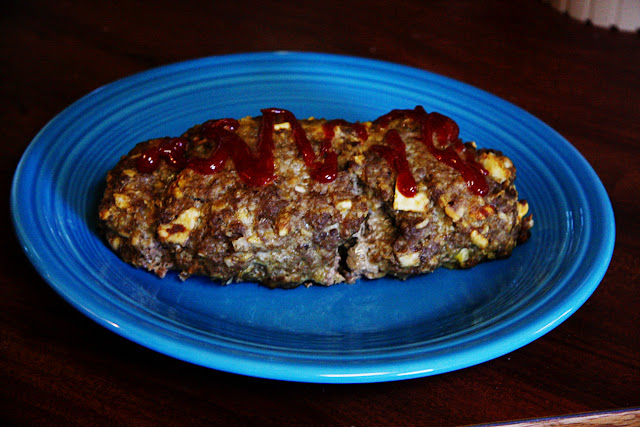 Once it's done pull it out of the oven, plate it, slice it, and serve. Mine usually ends up covered in ketchup....yummy!
Well if you try this I hope you enjoy it. it's very simple to make and oh soo good!!
Momma's Meatloaf
Ingredients
Optional
Directions
Preheat the oven to 350 degrees.
In a medium to large mixing bowl mix a four ingredients together. (If using the bell pepper and the salt and pepper mix it in now as well)
Form into one large loaf or a couple of miny loafs and place into an oven safe pan.
Next either place the bacon slices on top or squirt some ketchup on top or both or neither what ever floats your boat.
Place in the oven and cook for about an hour. (If doing several smaller loafs the cook time will be shorter)
JP
﻿
Posted by Janet Phillips at 8:39 AM

Email ThisBlogThis!Share to TwitterShare to FacebookShare to Pinterest
Labels: Cooking With A Farm Wife