So at the beginning of last week Caleb, his dad (Calvin), and Pop all decided it would be a good week to sell some calves, since the markets were up and it wasn't real muddy.


On Tuesday we needed to get as much ready for the Wednesday sale so we can make sure we get all the cattle in to the sale barn on time. So in order to get everything ready we have to do some sorting. In the first group, Calvin' calves, we had to sort off the bigger calves from the smaller ones. 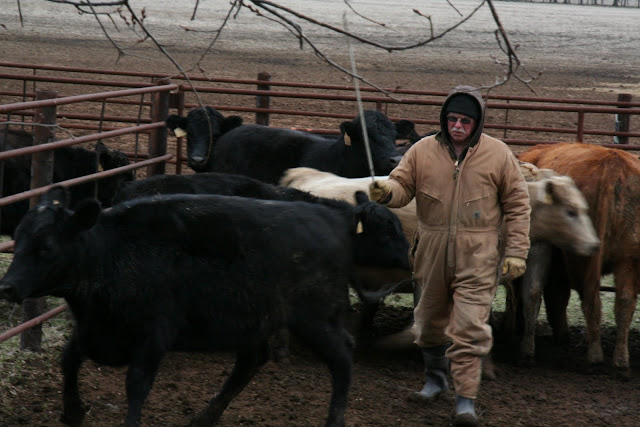 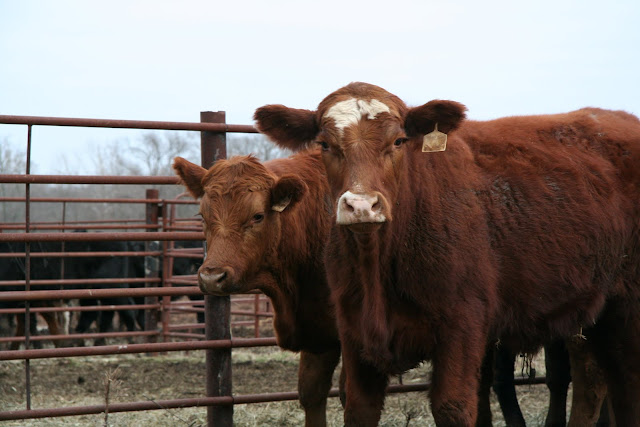 Here's one of the bigger guys starin' me down. 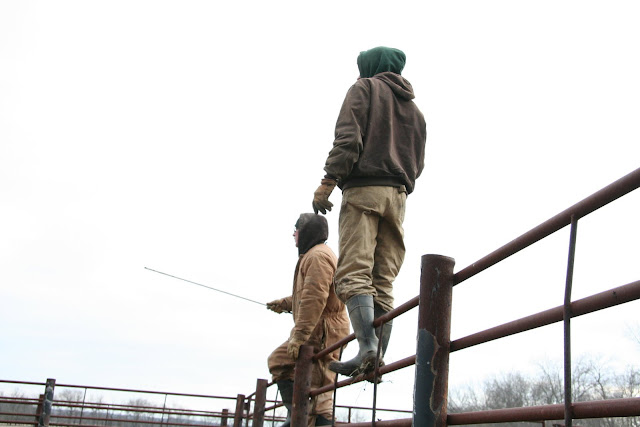 Now once they got them sorted, they needed to count how many they had, cause Calvin was only wanting to sell a trailer load of them right now. 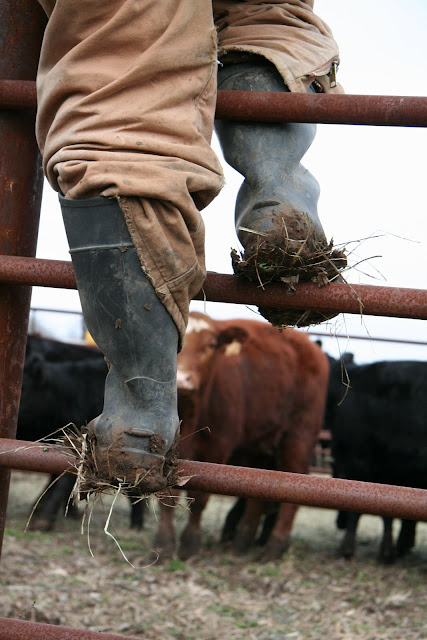 Ok there was some mud, but really most of it was mixed with some other stuff, if you know what I mean, and if you don't just think for a while you'll figure it out. 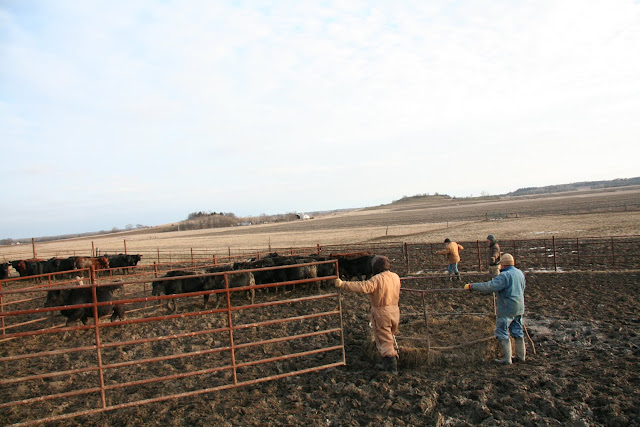 Once we got all of Calvin's sorted it was time to move to mine and Caleb's calves. We were planning on selling everything but a few of the really good heifer’s (female cattle that haven't had a calf yet) for replacements of some of out older cow's.

As you can see here's where all the mud is, and as you can see I'm not in it. But really in all actuality if you really knew me you would think that kinda odd cause I love getting my feet dirty, but I got my camera in hand today so I try to stay back out of the way. 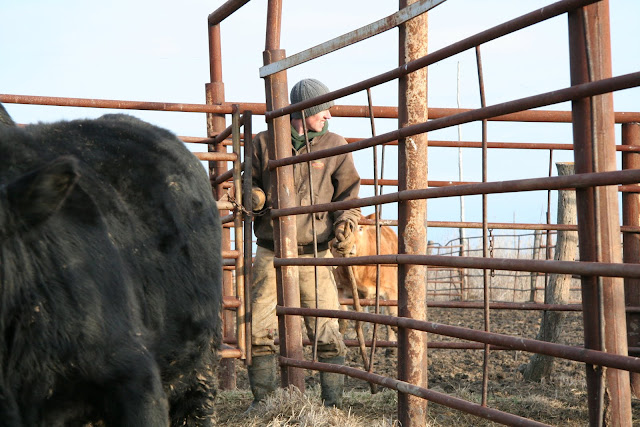 If you have never sorted cattle before there is a little bit of a trick to it and it works best if you have a number of different pens you can sort the different groups in to. 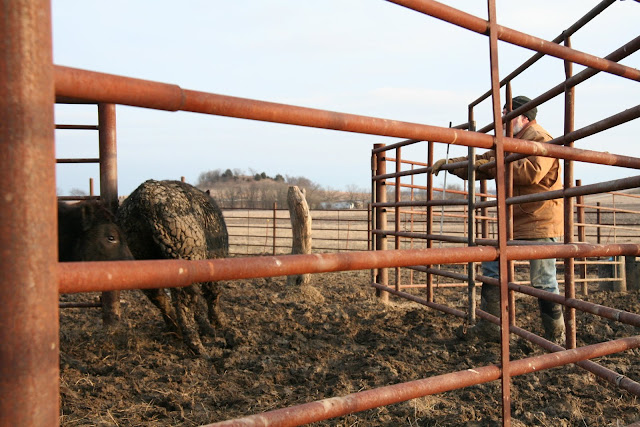 You need someone to be the "gate man". This is usually my job, but since everybody is helping today I have a chance to get a lot of pictures so I relinquished my position over to Jeff, Pop's hired man.
The trick with running the gate is you need to have it open enough so the cattle see the hole, but not to wide because you need to be able to shut it fast when one sneaks by the sorter's in the pen. 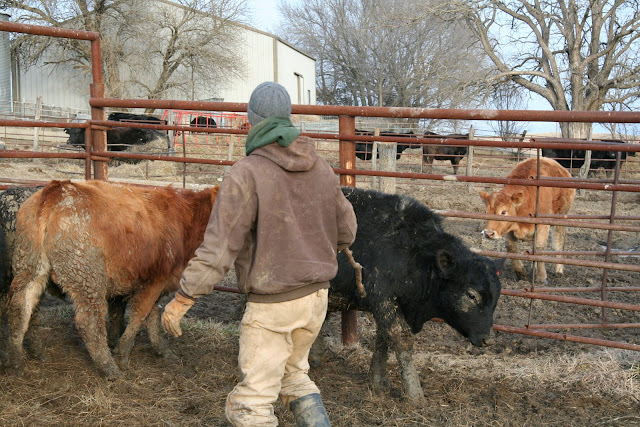 When you are a sorter in the pen try to let only one's you want to go out the gate by you. The object of this is to do this quickly, without falling down, getting ran over, or getting kicked. It's defiantly not as easy as it looks and a lot of sorting ease comes from the mood of the cattle.
Both groups that we sorted were kinda a little spunky today, but we got them sorted relatively easy. Caleb had originally wanted to keep 10 replacement heifers, but once we got them sorted we wound up with 14. Oops....Oh-well we will hopefully have 14 really nice cows when it's all said and done.

Sale Day
On the morning of the sale we had to get up a going early cause the first truck and trailer was coming at 8 am and Caleb wanted to feed the calves one last meal before they left. My job for the morning was to go give hay to all the groups of cows. Usually not a big deal, but when I got to the first pasture I got a little gung-ho and decided to un-roll one of the big bales by hand....30-40 minutes later I finally got it all unrolled and boy was I pooped! I would have passed out when I finished, but the bossy ol' rip of a cow was stairin' me down and well I thought it would be in my best interest to get back to the truck. 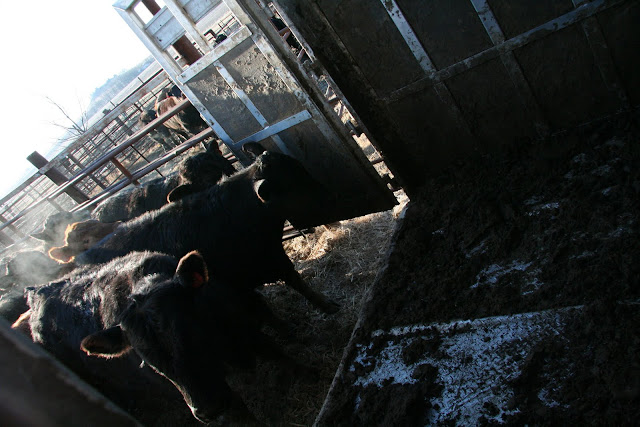 After I got the first group of cows taken care of I stopped by to say goodbye to the first load of our calves. They weren't to sure about getting in the trailer. 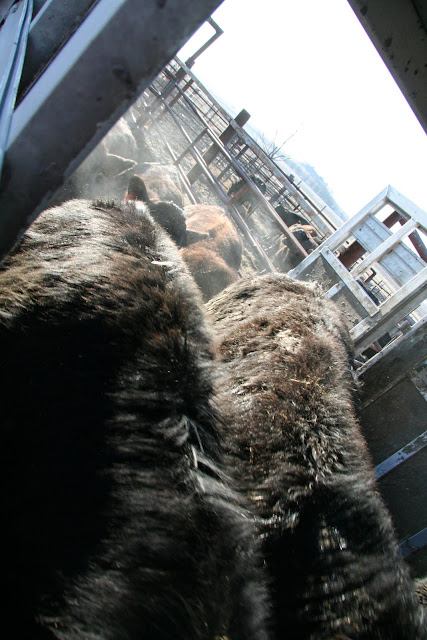 But finally they climbed aboard..... 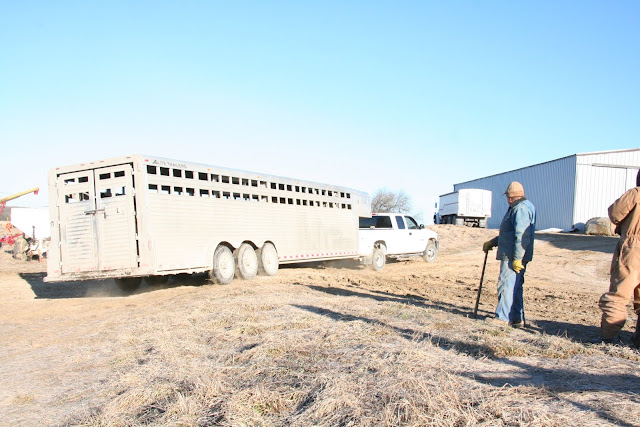 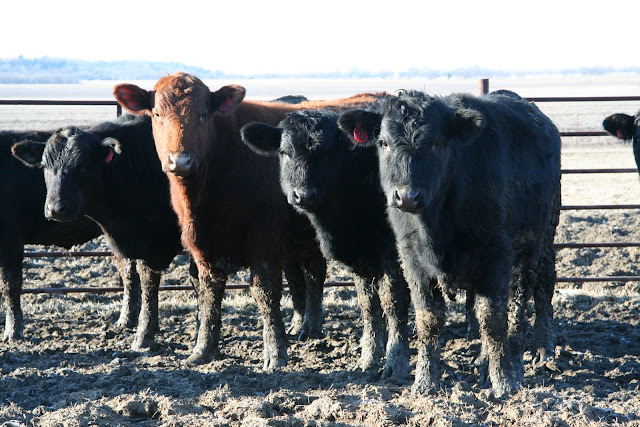 The next group waits for their ride to town. 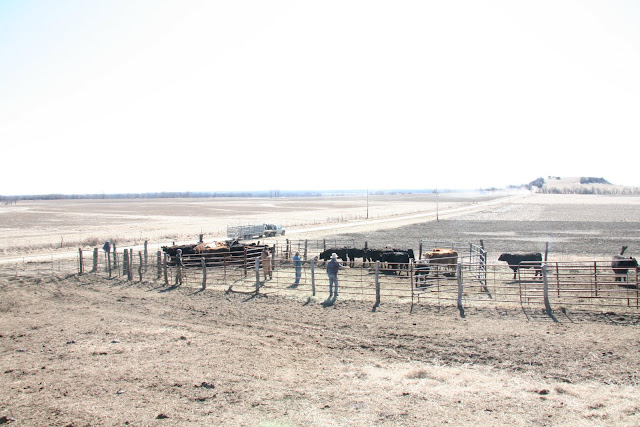 After we got our calves and Calvin's calves on their way to town, we headed up to sort Pops calves. We once again were sorting off the heifers to keep for replacements. 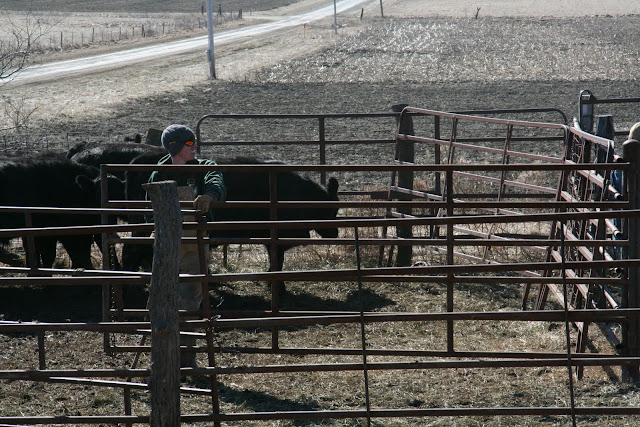 This time Caleb was the 'gate man,' while Calvin and Jeff worked the pen. 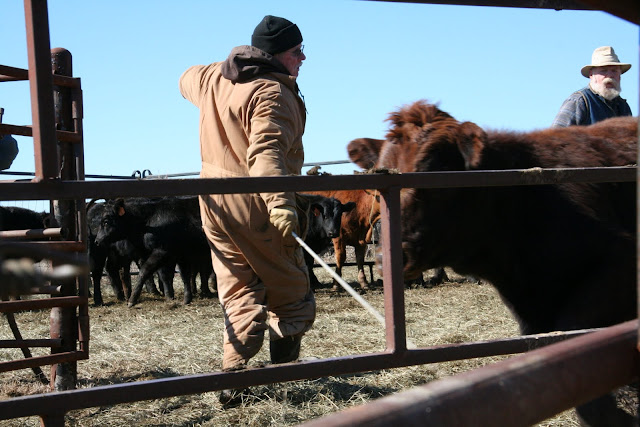 Caleb was kept busy, cause an occasional spunky heifer would get a mind of her own.... 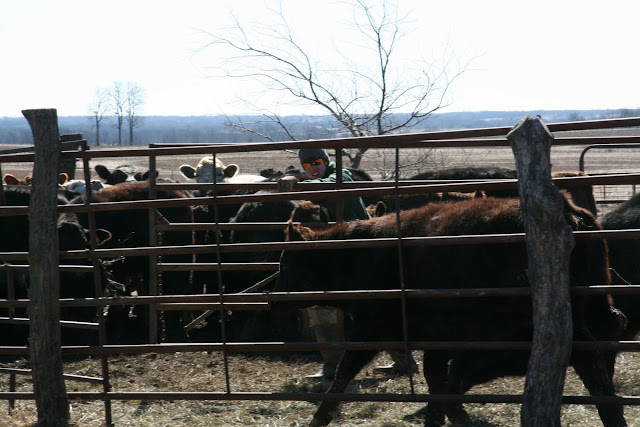 ....and every once in a while she would sneak past even the best gate man. 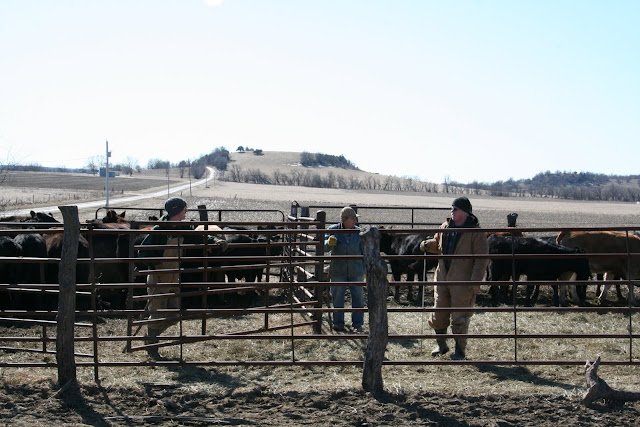 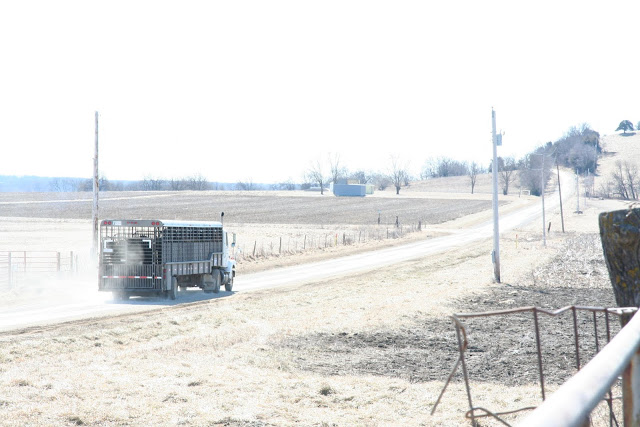 Once everyone had been sorted off, they were all loaded up and they headed down the towards town. Caleb and I then headed home and grabbed some dinner and then made our way to town to watch our 'babies' sell. 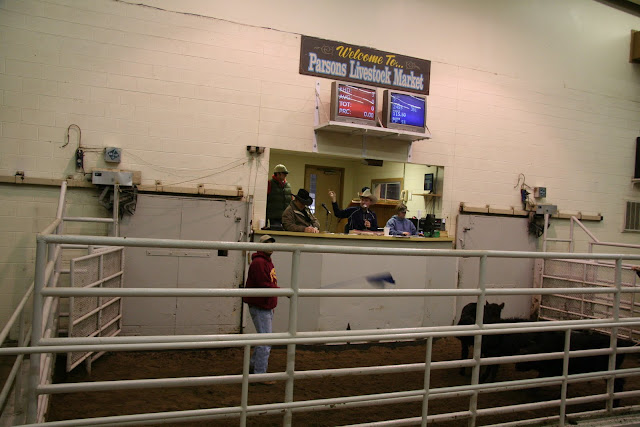 When we got there the sale madness had already begin. 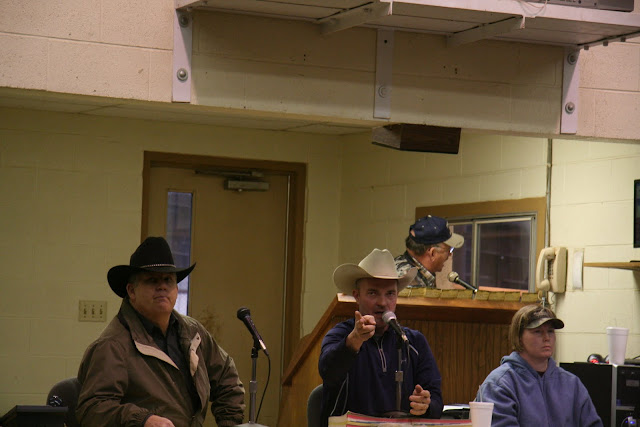 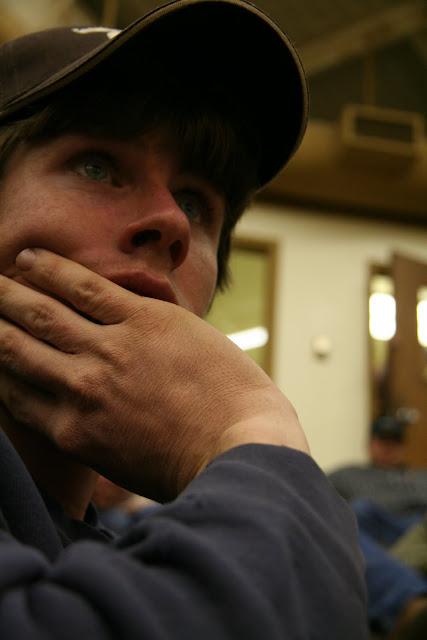 And then the anxious farmer sat and waited for his calves to sell. Hoping they would top the sale, but praying they would bring enough to keep on farming. 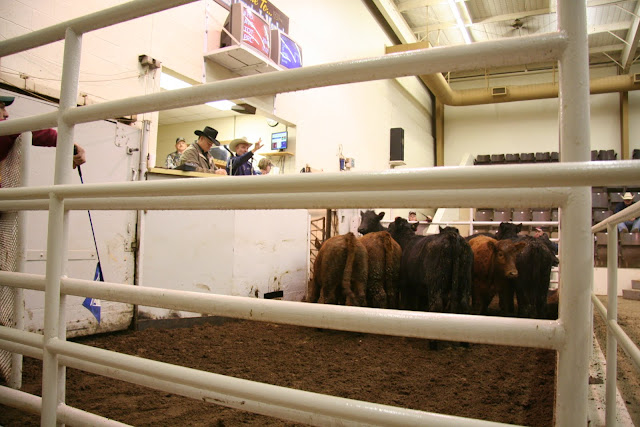 Then it happened, the auctioneer said our names and in came our cattle. 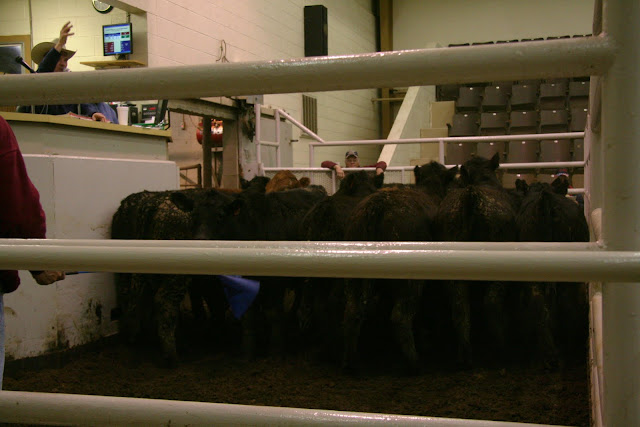 Around and around they go. 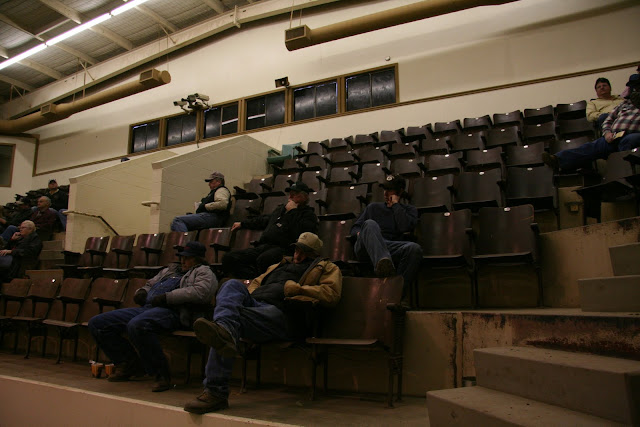 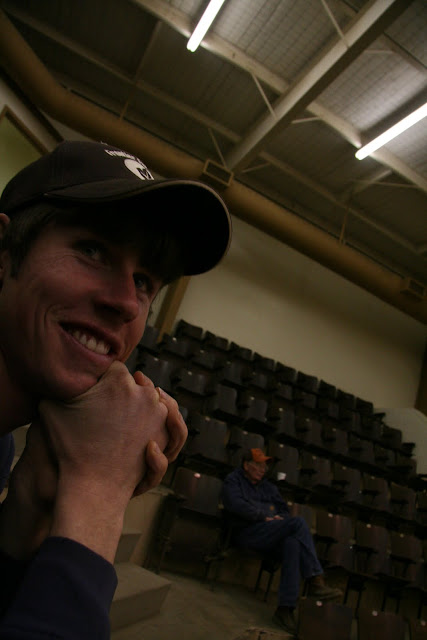 When it was all said and done, there was a smile on his face, so he must be happy with how they sold.
Posted by Janet Phillips at 5:50 PM