Chorin' in the Snow

All last week we were told that on Thursday and Friday we were gonna get hit by a major winter storm, with chances of ice and close to a foot of snow. So I was praying all last week that we would not get all that madness and mess. Thursday came and went and we weren’t getting anything. They were getting it to the north and to the south but we weren't and I was so very thankful! When I went to bed I was expecting to wake up to snow up to my knees, but early Friday morning as I crawl out of bed all I find was about an inch of snow and that was it. Oh I was so excited; maybe we missed this crazy storm. Even though it was still snowing I had faith we weren't gonna get much, but as the morning chores went a long I knew we were gonna have a lot more snow than a couple of inches... 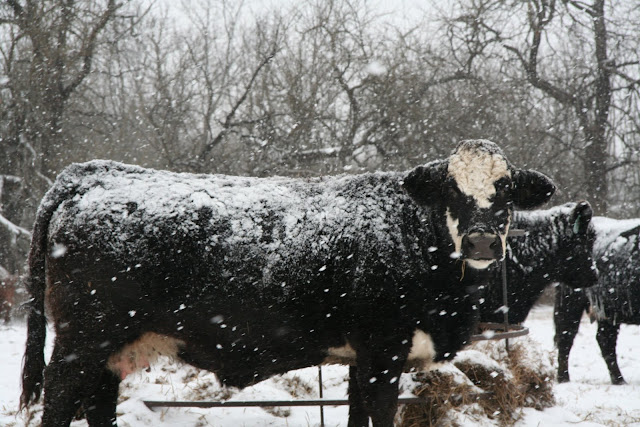 Bossy here, like all the others, back has gone from it's normal black to a snow packed white. I always get the feeling that she is gonna eat me for lunch every time she looks at me like this. She actually did charge a few steps at me on this day. It was a good thing she stopped cause the truck wasn't close by and all I had was a camera, not much defense against a big crazy cow. 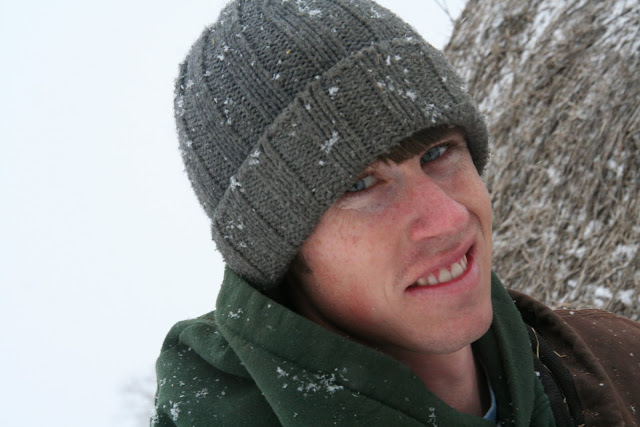 So lets play the game 'What's Caleb thinking when he makes this face?'
-"Gosh it's cold out here"
-"I wish I was back in bed"
-"Will you please get that thing out of my face"
I'm gonna go with the latter of the choices. 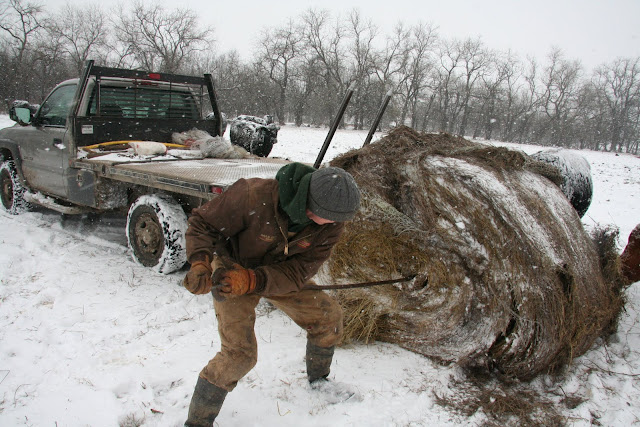 Now it's time to un-roll a bale for the cattle, so they have a place to lay since the snow is one the ground and so the little one's can get up there and eat too.
Since we don't have a bale bed, that un-rolls the bale on the back of the truck, we have to either use man power or the bale un-roller we got from my dad.  It works by sticking this long metal rod through the center of the bale.... 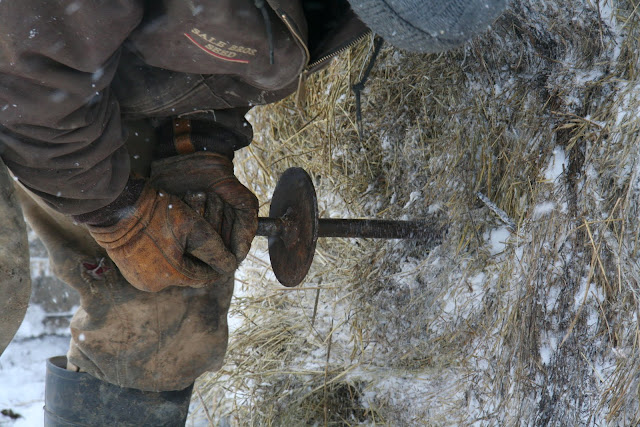 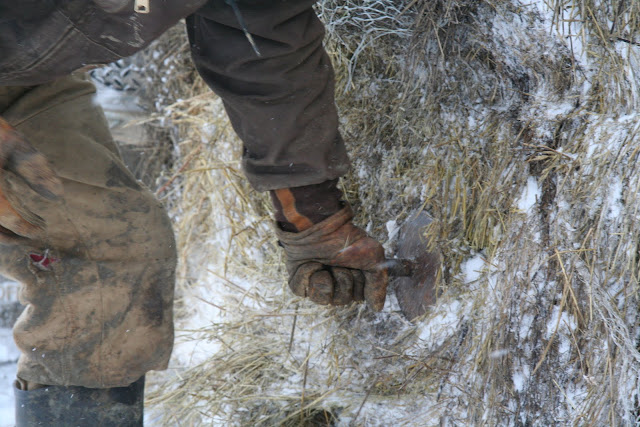 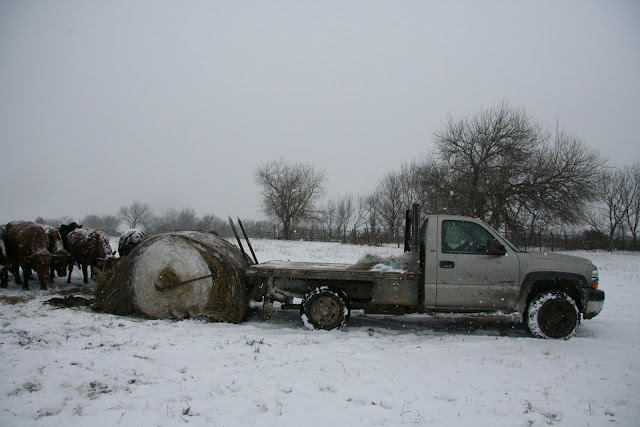 Then you hook it to the truck using these polls and chains. After you have the done you take off and let it un-roll. Well at least that's what is supposed to happen, but this squatty bale didn't want to corporate with us today.
If at first you don't succeed, try try-again. 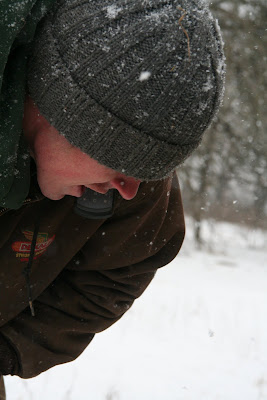 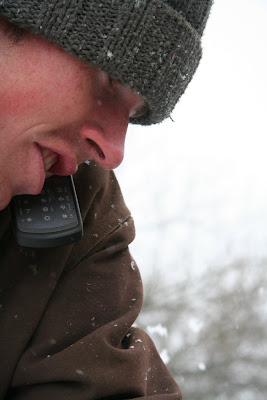 Nobody can accuse Caleb of not being a multi-tasker; he can ram a rod through a bale while talkin' on the phone. (I am tempted to change my name in Caleb's phone to Justin, cause if I did then I think he would answer more when I call to see where he is when it's time to eat.) 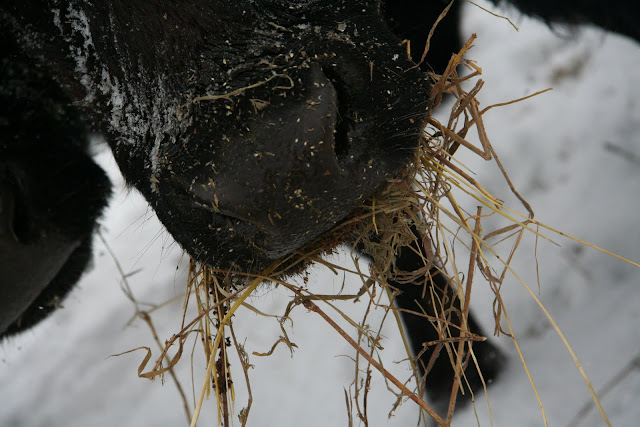 The girls are getting sick of waiting on Caleb so they snitch a few bits while he is trying to figure it out. 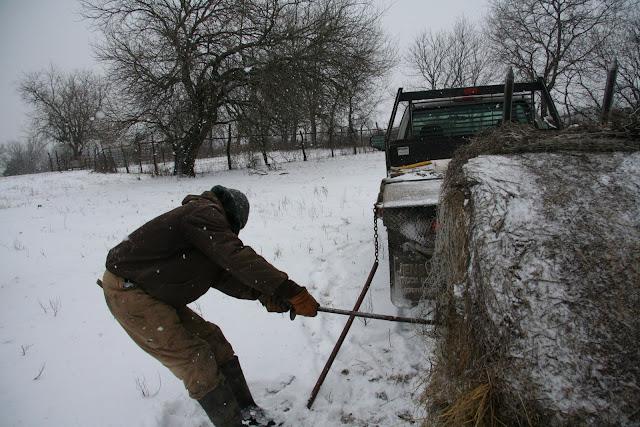 Now we have to pull it out and stick it back in, but this time he put it in the center of the bale where it was suppose to be. Maybe this will make it unroll better. 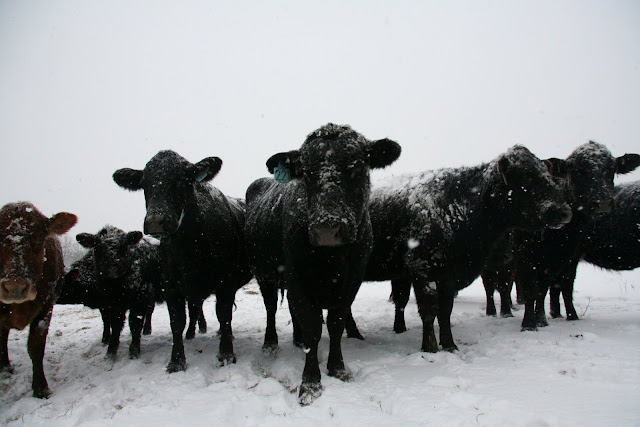 While he's doing that I am gonna take some pics of the ladies.. 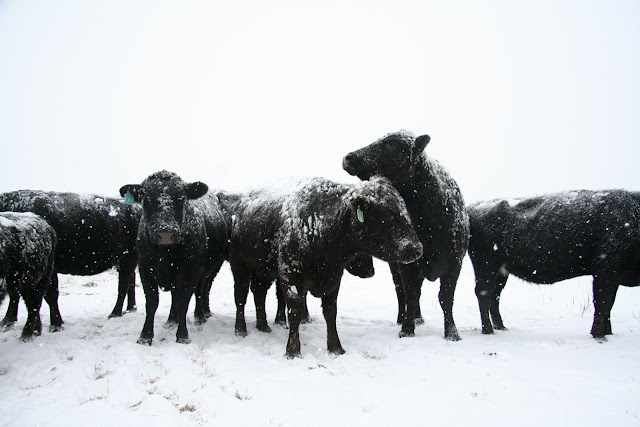 ...who are waiting patiently but the want their food. 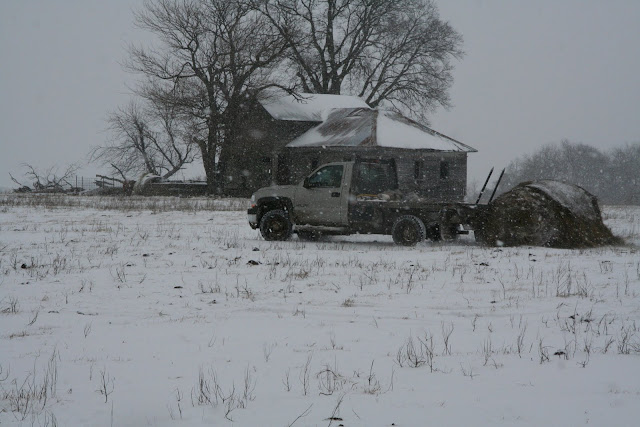 And were off again, but wait...Why isn't the bale un-rolling?? 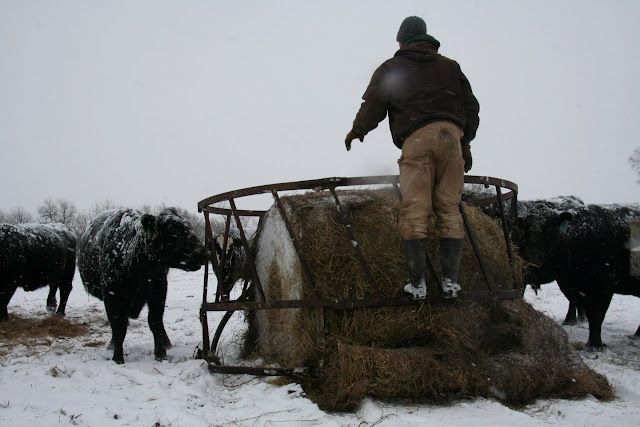 If again you don't succeed, un-hook the bale, throw a bale ring on it, count the cows, and move on the other pastures. 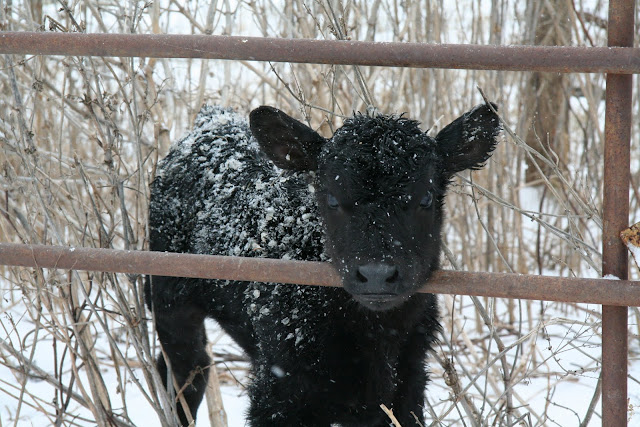 This cute little guy is the baby from one of our heifers. He had the most beautiful curious eyes. We finally made it to the final pasture, and the snow isn't letting up a bit!! 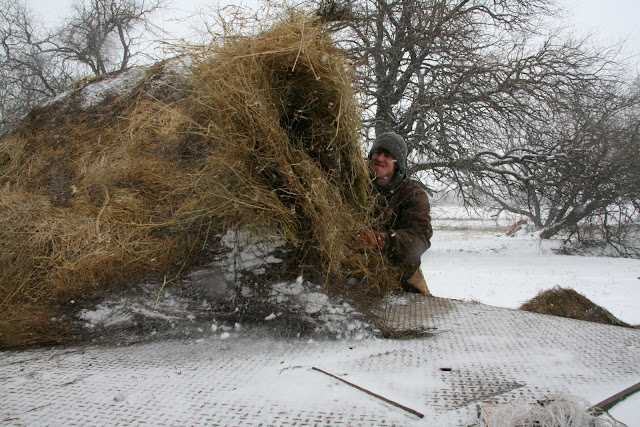 Once again Caleb was wanting to un-roll a bale, but this time I was enlisted to help, cause we were gonna use manpower for this one. 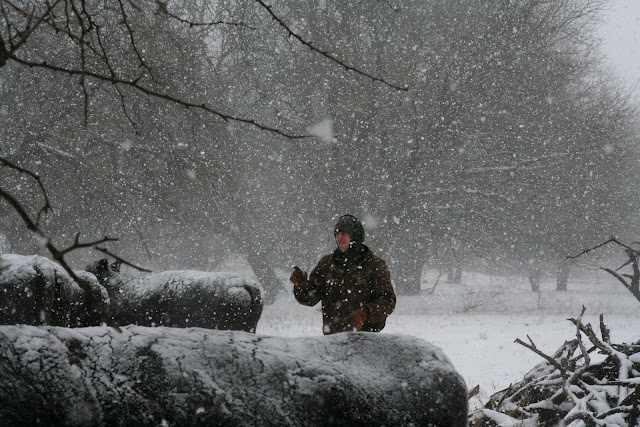 Now that all the hay is out lets count all the cows, cause the snow isn't letting up and my fingers are about to freeze off. 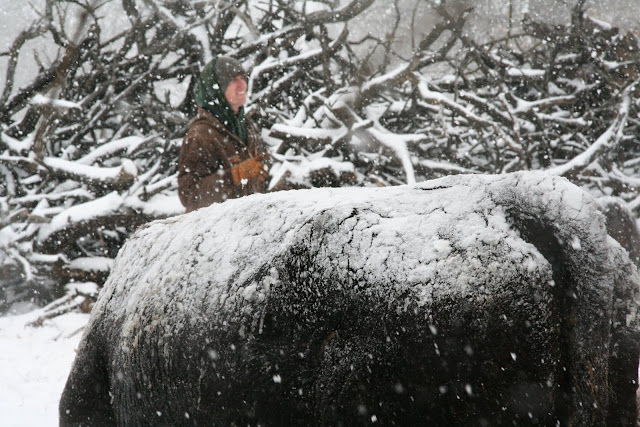 When it was all said and done we got about 6 inches of snow. It wasn't as much or as bad as they in other areas, but it was more than I wanted. O-well it's here and it makes for some great pictures!
Posted by Janet Phillips at 11:16 AM