I love pasta, epically spaghetti it's my favorite!! And for the longest time I always used the spaghetti sauce that was in the jars. I would brown the hamburger and just dump it in. Then one day I was talking to my sis and she said she always made her own. I asked what she used and I took it and put my own spin on it, which wasn't really much of a spin at all. I know some of you might be thinking it's just so easy to use the jar stuff, ya just dump and go, but seriously it's really easy to make your own and it really doesn't take much if any longer and it's soo much better!!! Needless to say I stopped using the jar stuff and never looked back. 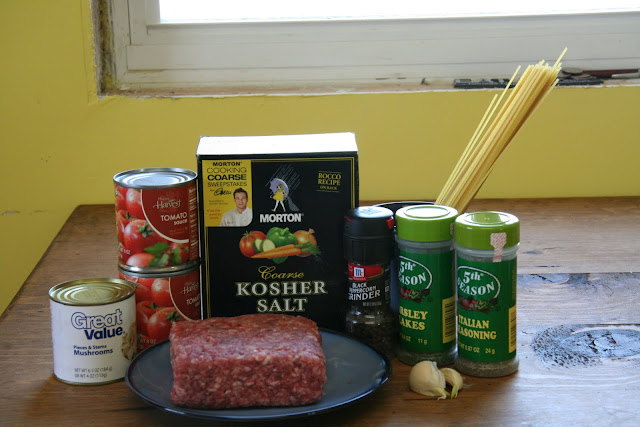 Meet the Members: Ground beef, tomato sauce, mushrooms, salt (ya don't have to use Kosher salt, it's what I had there to take a picture of, regular salt works just as good!), pepper, Italian seasoning, parsley flakes, garlic, and spaghetti. 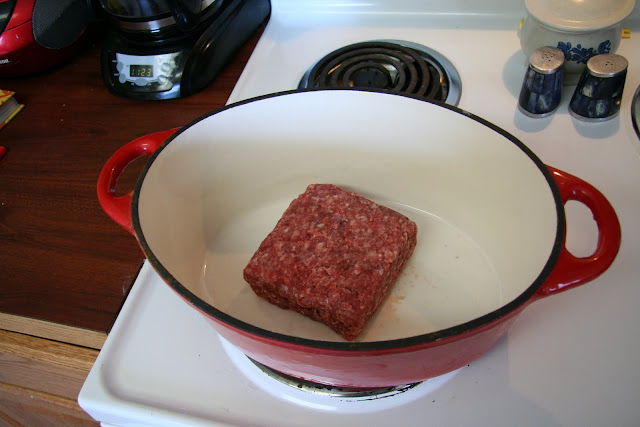 First things first, ya need to brown your hamburger. I started using my Dutch oven cause I don't seem to make near as much of a mess with it. 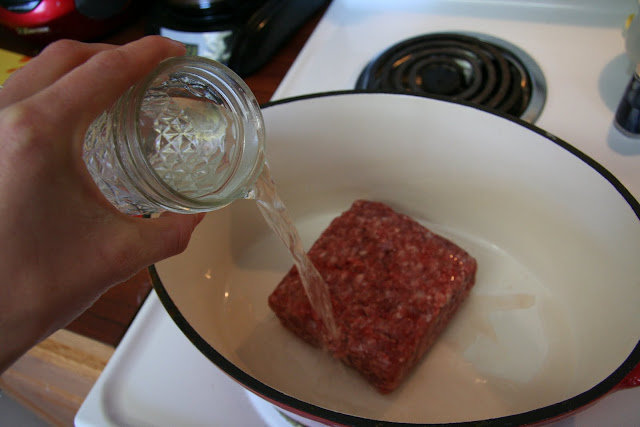 Something I use to make the hamburger gook faster is water. 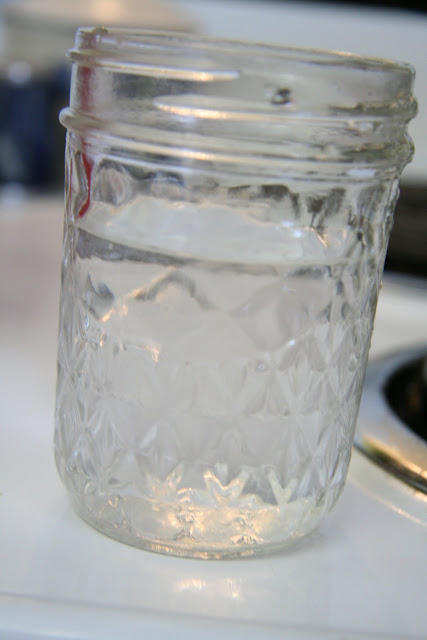 I add about 3/4 cup of water strait to the pot or pan....which ever I’m cooking in. For the most part the water steams the meat; it also helps to drain the grease better, when it's done cooking. 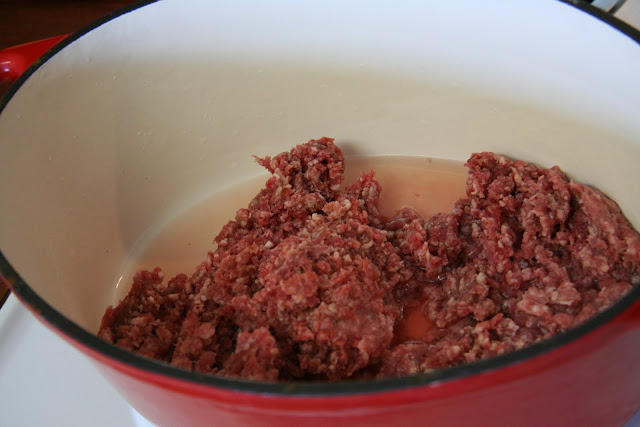 I crumble up the hamburger and get as much as I can touching the surface of the pan. 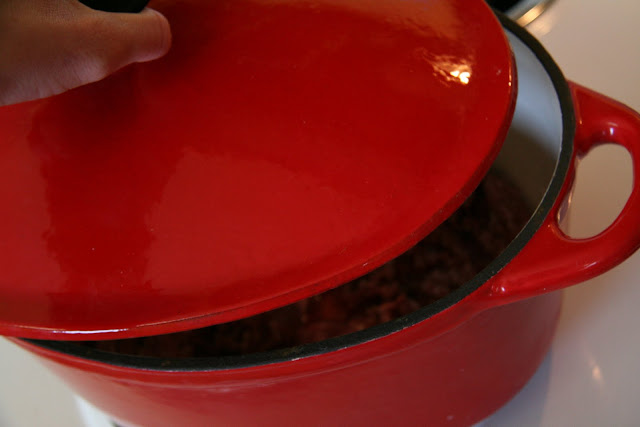 Next place the lid on the pot, this hold the heat in and makes the meat cook faster. 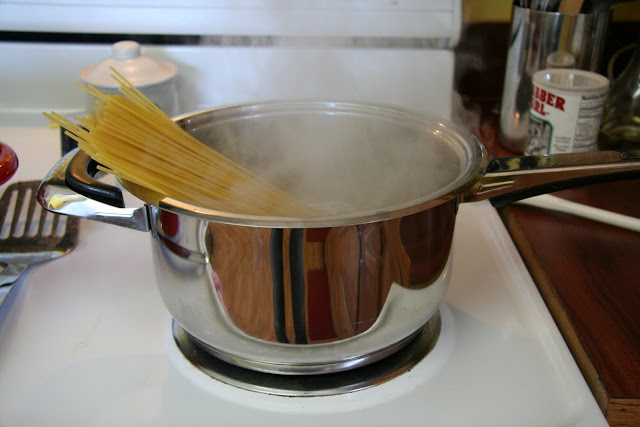 You are cooking the spaghetti aren't you??? Well if you’re not then you should be, so put a pot of water on the stove and start cooking it! 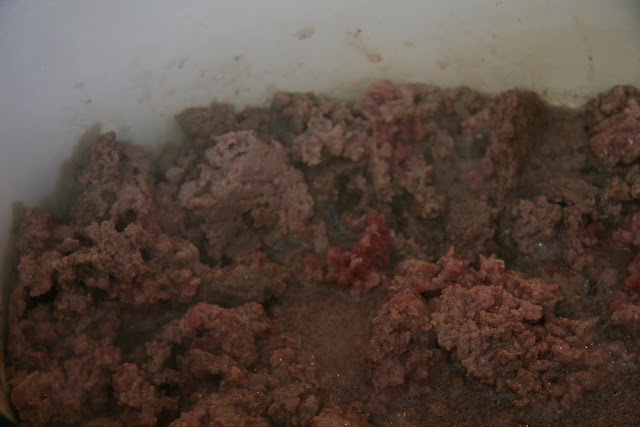 After a few minutes take the lid off the hamburger and turn it over with a spatula and chop it up in to smaller pieces as you are doing this. Cover it once again and allow it to cook more. Repeat this as much as you need to till the meat is fully cooked. 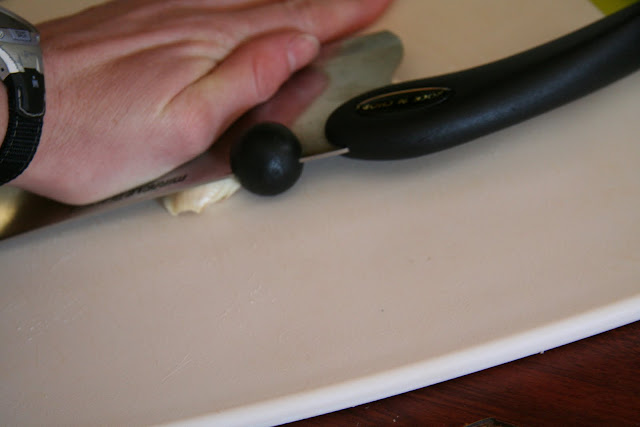 While the meat is cooking you can go a head and chop the garlic up. A hint for getting the skin off the garlic, take the side of the knife and squash it. That's right just flatten it. After you do this the skin will come off with out a problem. 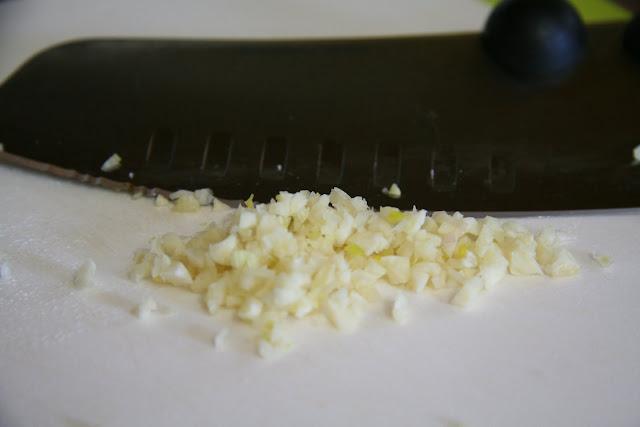 Once you have the garlic peeled, mince it (or chop it up as small as you can). 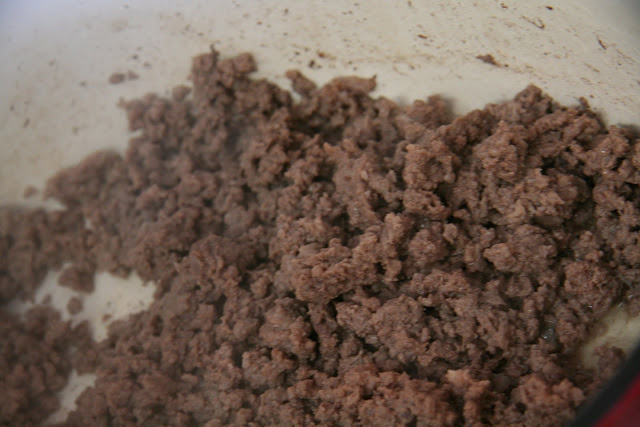 By now the meat has probably finished cooking, so drain all the excess water and grease off and return the pan to the stove. 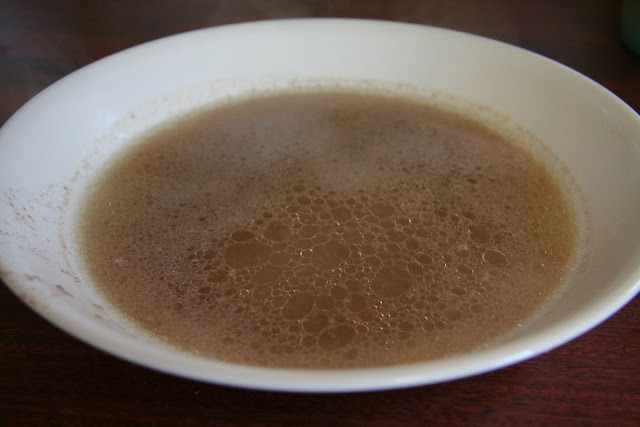 See how easy that stuff drains off. After this cools off take it out and give it to your dog. They will fall madly in love with you and will be your friend for life!! 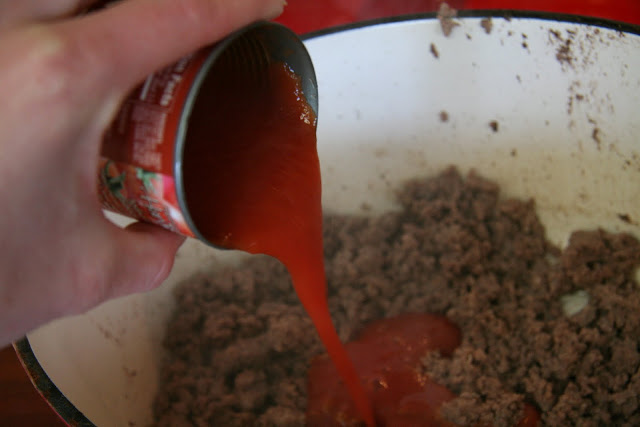 Once your meat is back on the stove turn the heat down to about half way between low and medium and add two cans of tomato sauce to it. 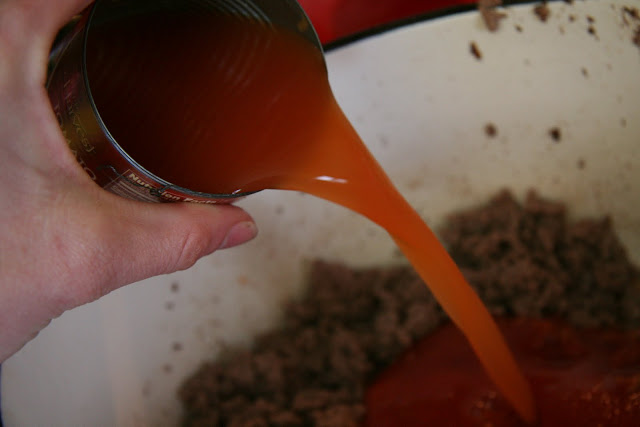 After you have emptied as much as you can from the two cans fill one of them with water and then dump it back and forth between the two cans a couple of times until you have cleaned out both cans. Now dump that watery tomato sauce mixture in to the pan as well. 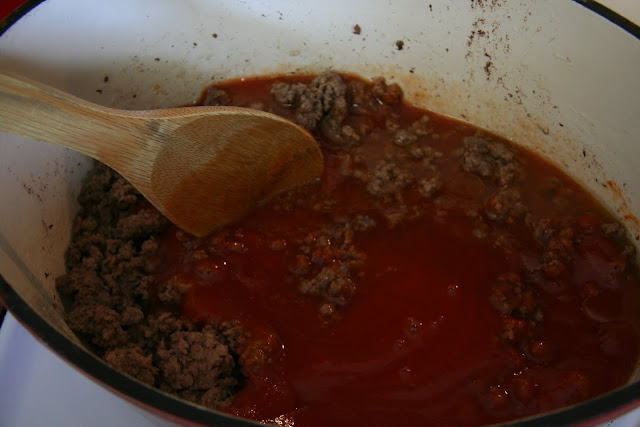 Now go a head a stir it all together. 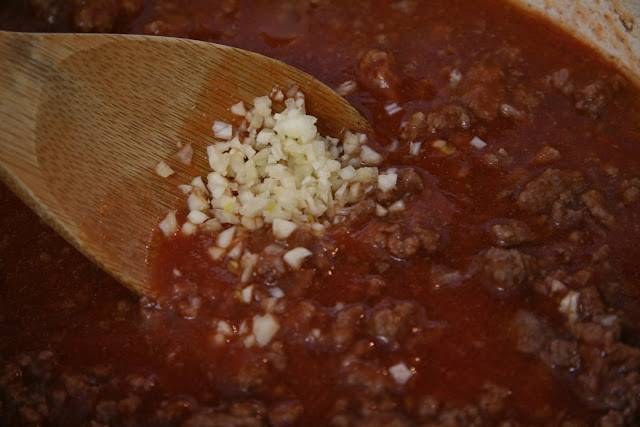 Now throw in the garlic you chopped earlier and mix it in. Now you don't have to use fresh garlic if you don't want to or if you don't have it. You can always use garlic salt instead. It will be just as good.  I personally like chomping down on those fresh chunks when I'm eating it. 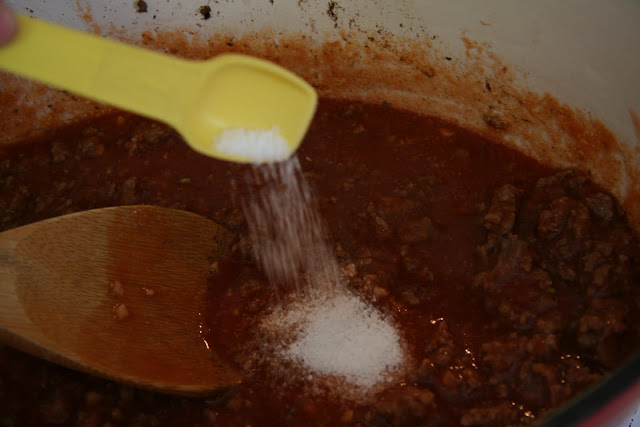 Now stir in about 1 tsp of salt.  If you are using garlic salt skip this cause it will way too salty. 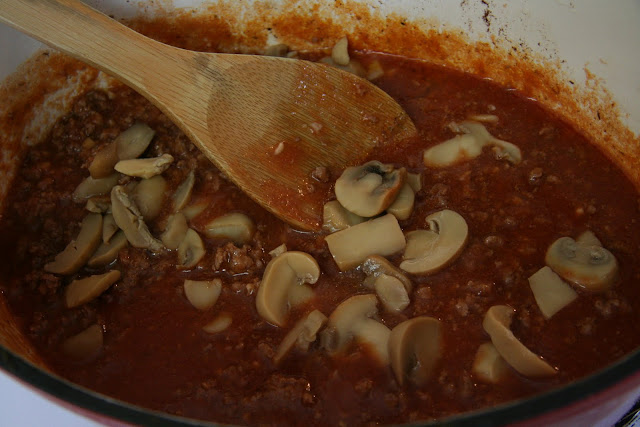 Now add some mushrooms.  I only add about half the can, but that's because my husband wouldn't go for any more mushrooms than this in the sauce.  You however can add as much as you little heart desires! 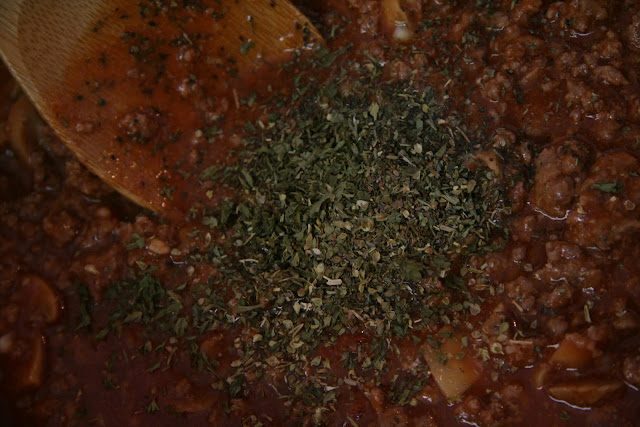 Finally add the Italian seasoning...I don't know how much probably some where between 1-2 tsp. Then I add a few pinches of parsley flakes and a few shakes of pepper. 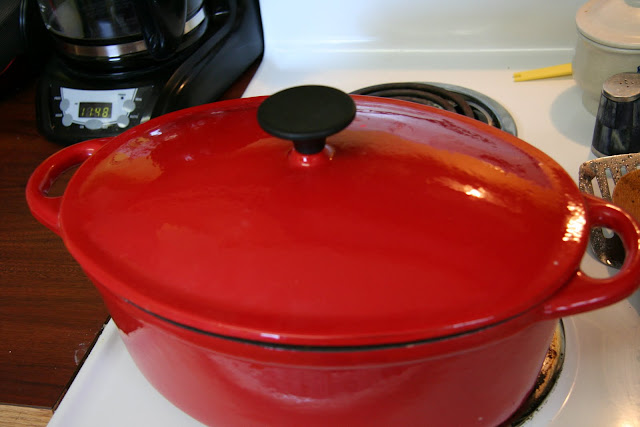 Stir it all together and return the lid to give all the ingredients their privacy so they can get to know each other a lot better. 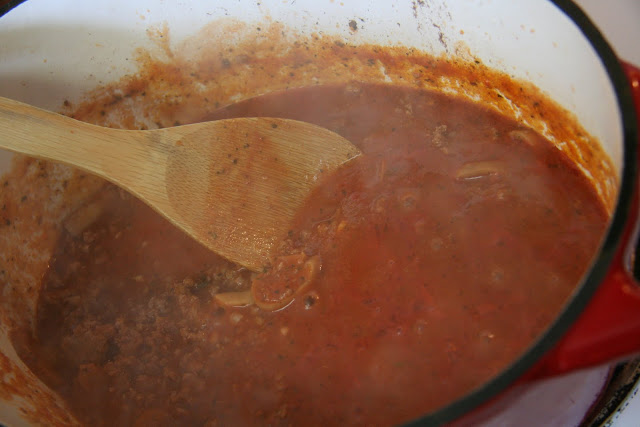 Let them simmer on the stove for about 5 - 10 minutes, stirring every once in a while. Somewhere in there make sure and give it a taste and make sure it tastes all right. If it's not just what you like add what ever else you might think it needs. 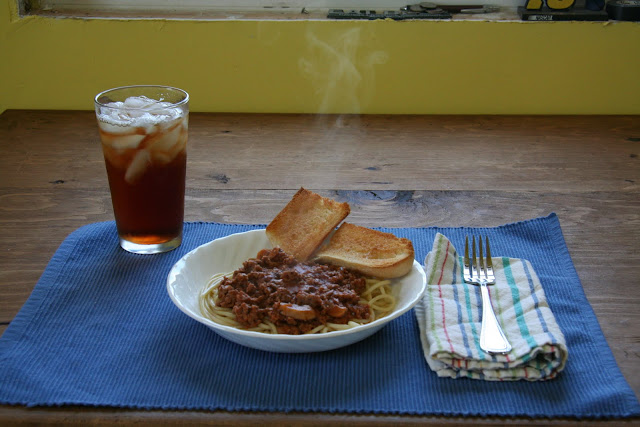 Once it's done plate it up and serve it with some garlic toast and a large glass of sweet tea, if you like that sort of thing, other wise serve with whatever wets your whistle. 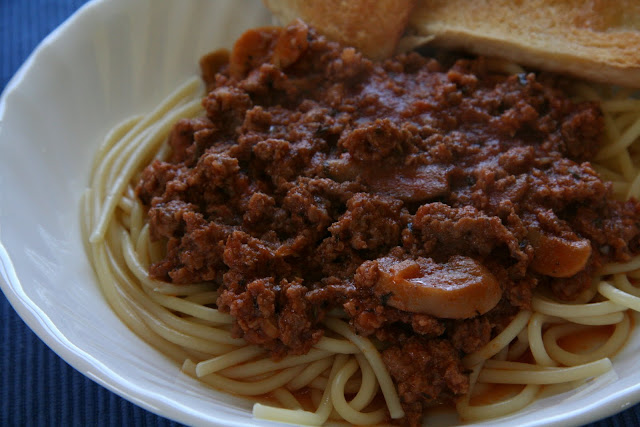 It's so yummy, you'll never go back to the jar sauce again!

Helpful hints: If you have a large amount of leftover sauce and don't really want to eat spaghetti for the next 10 days then put the excess sauce in a freeze proof container that has a lid and place it in the freezer. It keeps great. Then next time you want spaghetti just pull it out, add a little water to it and stick it in the microwave for a bit. It works great! i use to do this all the time before I married Caleb....now I have the human garbage disposal living in my house so I don't have to worry about it ever going to waste!

Hope ya'll enjoy this as much as I do!
Lots of Love,
Janet


Brown the hamburger, and drain grease.
Return pan with meat in it back to the stove and turn the heat to mid to low.
Add two cans of tomato sauce. Then add one can full of water as well. Stir.
Now add garlic, salt, mushrooms, Italian seasoning, parsley flakes, and pepper and stir. Cover and let simmer for 5-10 minutes, stirring occasionally.
Serve on top of pasta of your choice.

Posted by Janet Phillips at 4:02 PM

Email ThisBlogThis!Share to TwitterShare to FacebookShare to Pinterest
Labels: Cooking With A Farm Wife