"Make hay while the sun shines" is the motto of every farmer. When it's raining, snowy, or just extremely muddy, you are able to sit back and relax...well at least that’s what I like to pretend what the farmers who don't have cattle do.....but as for us, we cattle so no matter what the weather is like we still have something to do. In the winter time, especially when snow is on the ground cattle come first, but when the ground dries out enough to where you can start "working" the ground, as we say, then the cattle are put on the back burner, well kinda. (Working ground is kinda like tilling a garden it's just on a larger scale and with all different kinds of tillage equipment.) When I say put on the back burner, I mean that I get to do all our chores and all of the cattle chores for Caleb’s dad. This is on top of running around doing any thing else that needed to keep the tractors in the field. Oh and I am suppose to fix dinner (or lunch....whatever you call it) in there somewhere. Luckily I have a great mother-in-law, who if I call her she will throw a couple more burgers in the pan for Caleb and I.


So here's kinda a run down of what my day entailed of that Friday before the incoming snow storm... 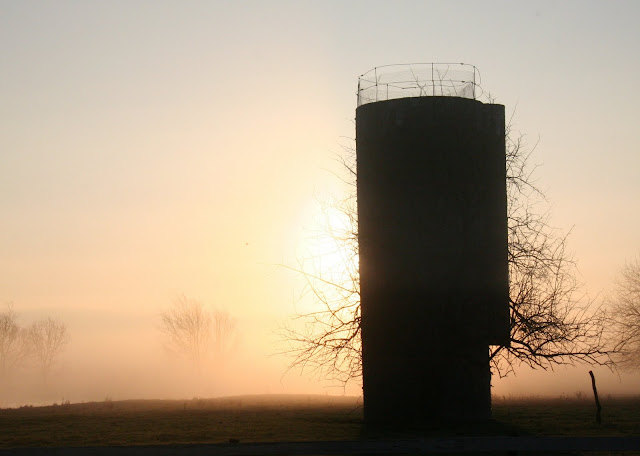 Wake up, look out the front window and see a beautiful foggy sunrise out my front window.
First things first I get something in my belly and get some snacks for later cause if I don't I will be a bear...don't believe me ask Caleb and then read my former post about the situation. 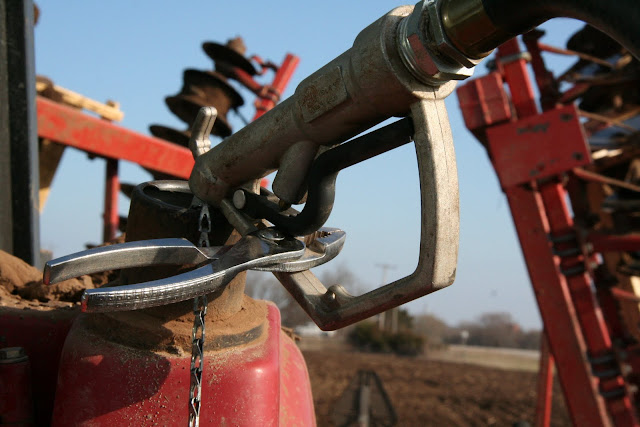 After taking care of the most important thing (me and my belly) I then head to my first assignment. Go and give the cattle right there at our house a bale of hay. Somewhere in the middle of this I received a call from the "boss man" (aka Caleb) telling me my next order of business. I am to bring the truck carrying the diesel tank....you know the one that is chained on using the chain I need to drag stinky away with (if you haven't read about this one you need to cause it's a hoot!)......anyways back to the job at hand. I am to take the truck over to the field where they are working and fill tractors up with fuel so they can run all day in hopes to get as much done as possible before the crazy snow.
As you can see we don't have an fancy-smacy handle for our fuel, so unless you want to stand there and hold the fuel nozzle while 75 to 100 gallons of fuel shoots into the tractor, ya need to find something to hold it for you so you can do other important things, like eat. Pliers work great for this job and any good farmer would have a pair strapped to their side so they are usually easy to get a hold of.....unless they are like my husband who "misplaces" as he tells me....in other words he's lost them again. 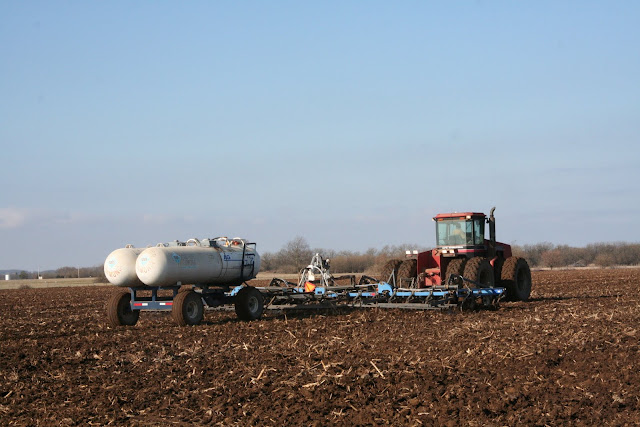 So while that is filling I thought I would show you what else was going on in this field. Here's Calvin in his chariot for the day. He's pretty much in this beastie from sun-up to sundown or until he runs out of anhydrous. This beast is crazy long. 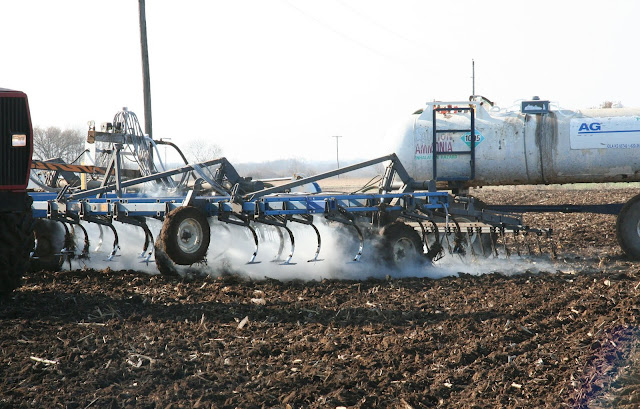 We only put anhydrous (or anhydrous ammonia as it's more formally called) in the ground when we are planting corn on that farm, it is our major source nitrogen for the corn. This is a very dangerous process. That white cloud you see is some very nasty stuff. You want to make sure when working with anhydrous to always be extra careful. A little whiff of it won't hurt you, but if you were to inhale a lot of it it could kill you. This stuff stinks to high heaven....if you have ever had a perm it kinda smells like some of the junk they put on your hair, only a million times worse! 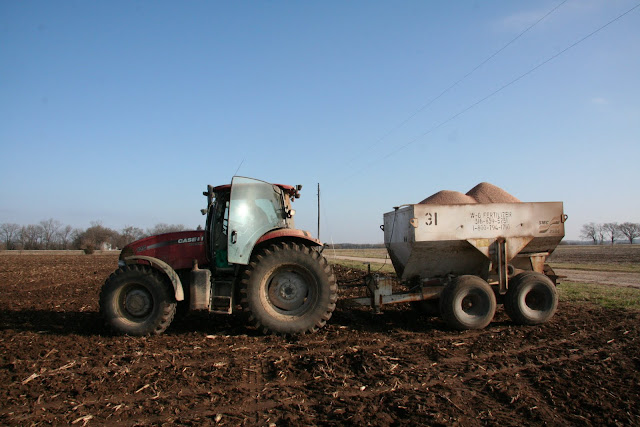 Along with anhydrous, we also 'throw' some phosphorus and potassium on to the fields before working the ground. 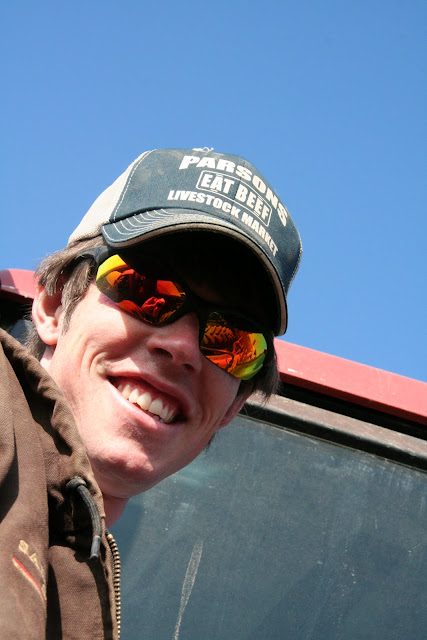 Ok so the tractor is still filling with fuel so smile for me..... 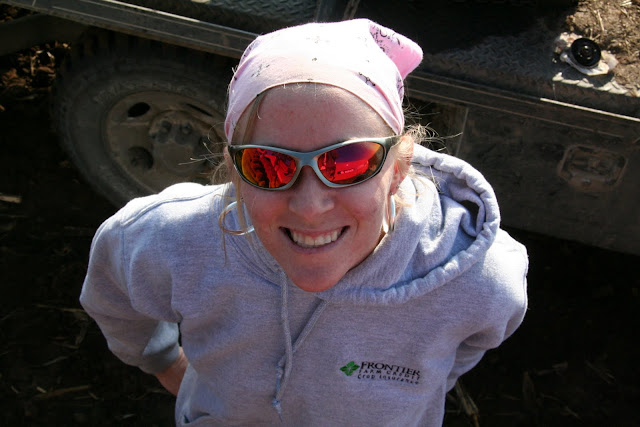 ... and take a pic of me too. Ok, now that the tractors are fueled up and ready to go it's time to get to business. 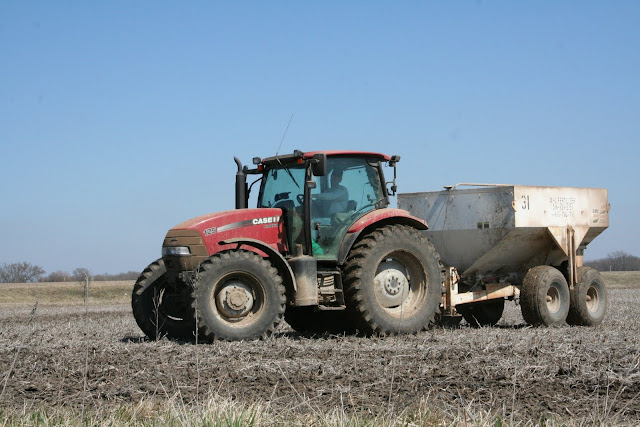 So Caleb hops into his chariot and starts spreading the dry fertilizer. 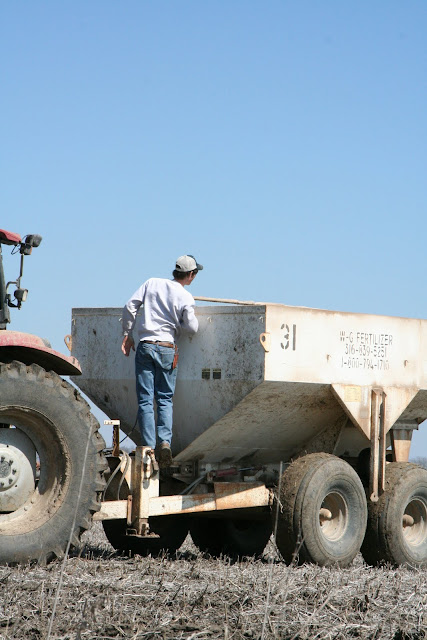 Every once in a while he has to get out and see how much fertilizer is left in the spreader. 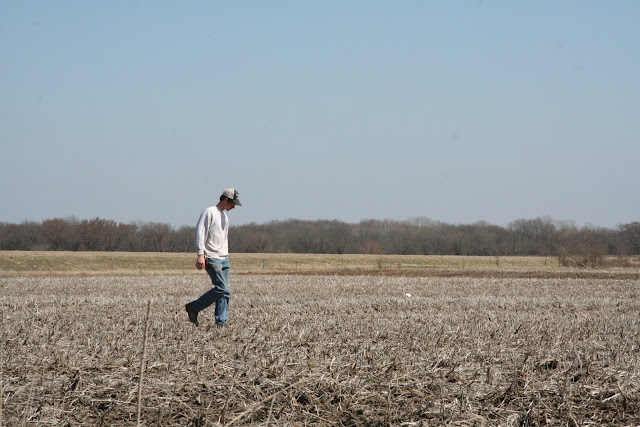 He would also go and checkto make sure the spreader was working correctly. At this time i was told to forget about the cattle for now, cause I was needed for more important things. 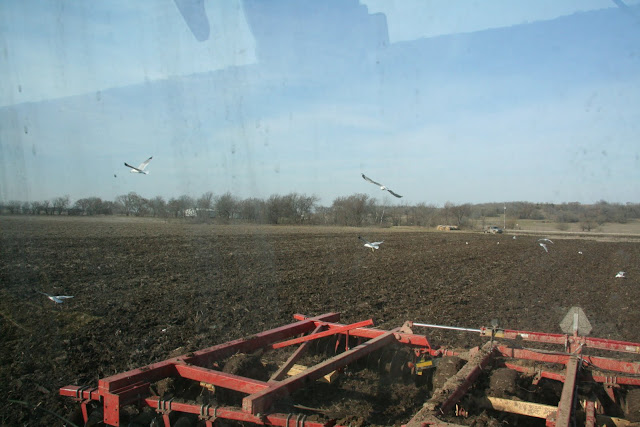 I was to start disking until the hired man was able to take over, but luckily I wasn't alone in the field. 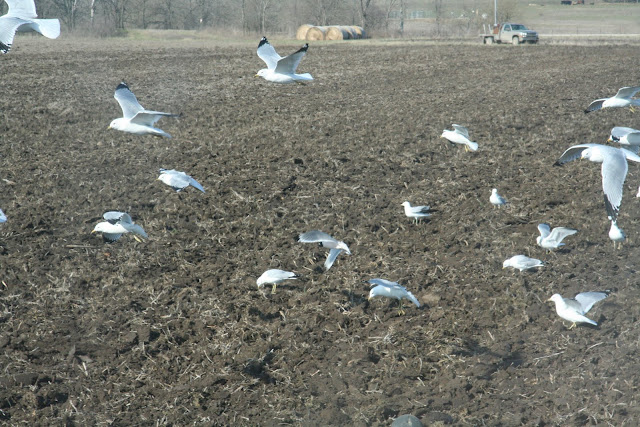 I was followed around for about 30 min to an hour by a flock of seagulls...not the group, the actual birds. I wasn't exactly expecting to see these crazy birds in the middle of Southeast Kansas. They are kinda funny birds and would follow the tractor around and snatch up worms as the soil would get over turned. 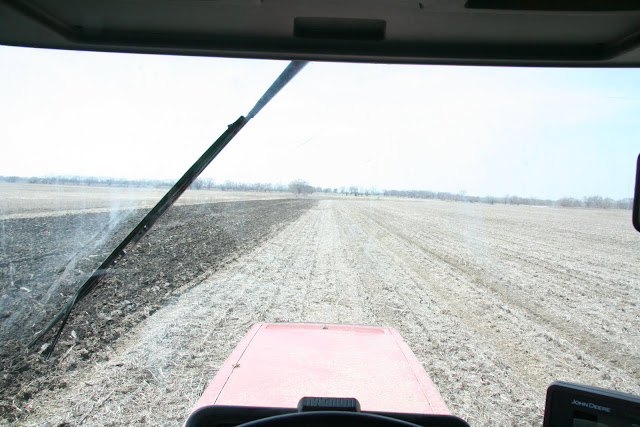 I was told I would only be in here for about an hour.....make that 4-5 hours. A little longer than I was told, but you gotta do what ya gotta do. 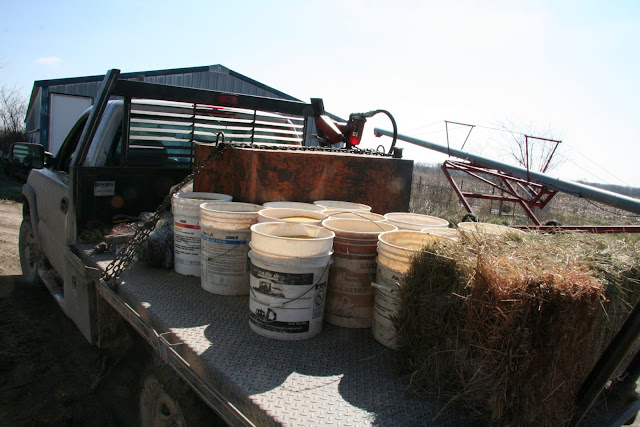 Well finally, the hired guy comes and takes over for me and I get to head on and finish up the rest of the cattle chores....which entails checking all of our cattle as well as feeding Calvin's calves....of course not without a couple of hiccups. While feeding Calvin’s calves I notice a rather large addition to the group....the neighbor’s bull. Who the day before was also in the pasture with them. Well on the previous day Caleb was able to come and help me get the guy into the holding pen, but that wasn't the case on this day.....but luckily I was able to easily chase him a couple of calves in the holding pen where they had to stay until someone had time to mess with them, cause I had enough other things to do.
After I had finished almost all the chores I head towards home, checking our last group of cattle on the way. By now the clouds have rolled in and the wind has switched from the south to the north. About the time I get to the house I remember that I need to feed our replacement heifers some feed as well as give them a bale of hay. So I jump back in the chore truck and make the 10 minute trip up to where are heifers are get them fed and then head back home where I am so very ready to crash! Seriously I’m soo ready for a vacation!
Posted by Janet Phillips at 11:29 PM

Email ThisBlogThis!Share to TwitterShare to FacebookShare to Pinterest
Labels: Life Around the Farm, Row Crops