I was raised on a farm in Northeastern Missouri, where we ate beef, pork, and sometimes chicken. Lots of fried, southern style food. Oh how I love that kind of food!!! While away at college I got introduced to all sorts of different kinds of food. One of my favorite foods being sushi. Yes, I said sushi. I know some of you are think 'what that's not farm food'. You are right, but that doesn't mean I don't love to eat it anyway!


Of course me loving sushi, means Caleb hate's it, and when I say hates it, I mean with a passion!! So needless to say I don't have it very often. I can count on two fingers how many times I have had it since we have been married.

Well, a few weeks ago I was talking to some of the ladies, in mine and Caleb's bible study, about sushi and I found out that I wasn't the only one who liked sushi. This got me thinking, why don't we take a girls only trip over to my favorite sushi bar in Springfield, MO. I arranged everything, sent the invites out and got the ball rolling for us to head over for the day. We had six of us girls that were gonna go. GREAT!!! I couldn't wait!!! Our Pastor's wife was gonna drive cause her SUV would be a little more comfortable than my crew cab truck.

So then, with much anticipation the day of the big event arrived. Caleb had told me the night before he was going to be in th field, so it was my job to feed and check all the cattle. No problem. I get up and out the door by 6:30. I get through all the pastures without a problem. Then while I was counting my last group of cows, my phone rings. It's the preacher's wife, sounding less than ok. She proceeds to tell me that she has been up since 2:30 hugging the porcelain god (the toilet). She wasn't sure if it was something she ate or if it was the stomach flue that had been going around, and even though she love's sushi it wasn't top on her list of things she would like to eat just yet, so she was gonna stay home. This meant I had to drive, no big deal I just need to clean a few things out of the back seat, one of them being a wooden block....why is it back there you may ask....ask Caleb cause I have no idea! Anyways, driving wasn't a big deal, since I was just about done and I was going to have plenty of time to get ready a get the truck cleaned out. Famous last words....or thoughts, cause I’m sure I thought them to myself, but I do talk to myself a lot so who knows.

Well, before I can go home a get ready I first have to stop by Caleb's grandparents house and feed our heifer calves, no big deal three buckets of feed and we're done. I get there, fill my buckets, head down and give the girls their feed. While I was feeding them, Pop had closed the gates blocked my only way out. I notice that the gat into the sick pen was opened so there must be one of the older heifers; from the group that had been calving must be sick. So as I am waiting for them to bring the sick heifer up I hear Pop 'hot roding' on the 4-wheeler, which usually means the animal is not cooperating. So I crawl over the gate and look to see what is going on. When I look, I see Pop on the 4-wheeler going back and forth and a young Amish kid no older than 13 trying to chase a crazy heifer who has feet sticking out of her, up into the sick pen, so they can get her in the alleyway and pull the calf. All the Amish kid had in his hand was a rope and Pop was on the 4-wheeler, which really isn't that good to use in smaller confinement. So needless to say they weren't having much luck with getting her to do what they want. So I grab a big stick that is nearby and head in to help. After whacking her on the nose a few times, she finally realized who was the boss, and we get her up where we were wanting her. Since she was one of mine and Caleb's heifers, I thought I should help with pulling the calf, so I grab the chains and put them around the calf's feet. Then we hook it to the puller and start pulling the calf. I would love to have pictures of this process cause it really is neat, but since my hands are covered with all sorts of things I don't want touching my camera there is now way we're gonna get pictures just now. So finally we get the calf out and unfortunately it was dead. We put the heifer back in the pen we just chased her out of, opened up the gates and I am on my way back to the house. I jump in the shower, get cleaned up, and clean out the truck and head on down the road to meet every one. When it was all said and done I was only 15 minutes late so not too bad.

I pick everybody up and we hit the road to Springfield, where we preceded to have a wonderful time and ate some marvelous sushi! 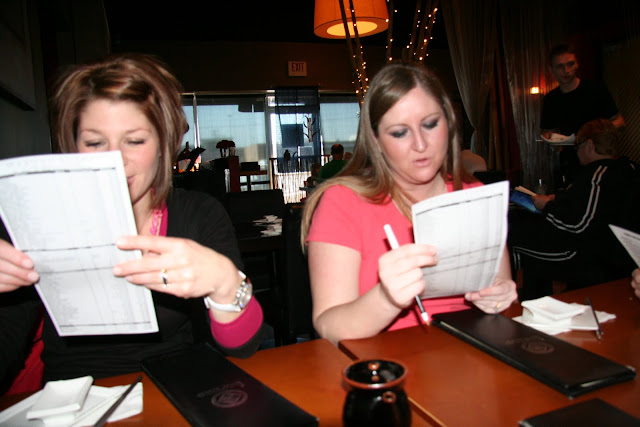 First we had to decide what we wanted to eat. There were so many choices, but I knew before we got there what I wanted to eat. Let me clear some things about sushi up....Not all sushi is raw, actually a lot of it is cooked. I've had both cooked and raw and like them both, but I recommend starting on cooked ones. Also Sushi is not for everyone, but don't knock it till you try it, cause one of my best friends who wasn't a fan of fish loves sushi.

Now on to the sushi. Here's some of the sushi rolls we got. 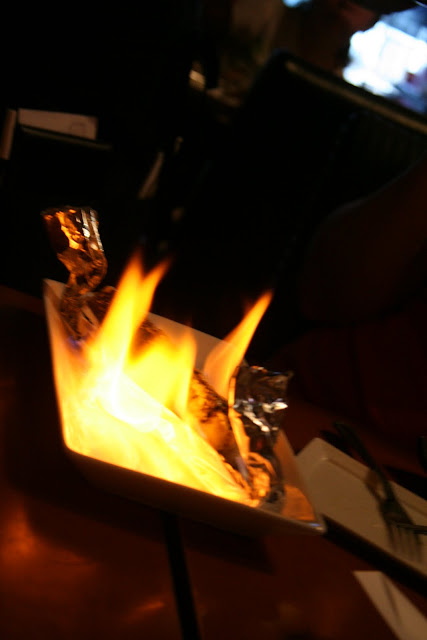 I don't remember what this one was but Theresa was excited that it was delivered to the table on fire. It was yummy. 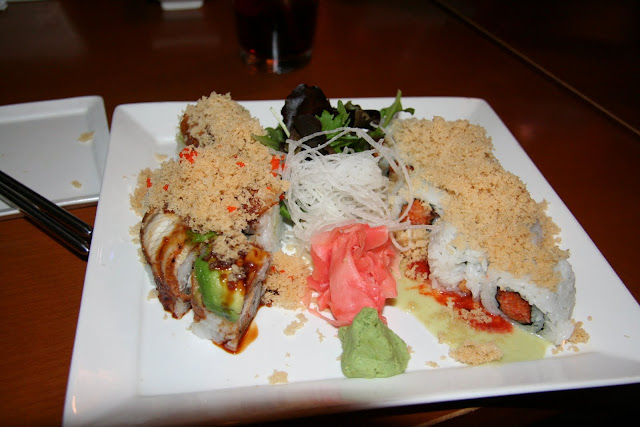 This was my plate. On the left is a 'Jurassic Park' roll and on the right is a 'Sex in the City' roll. They are my all time favorite!! 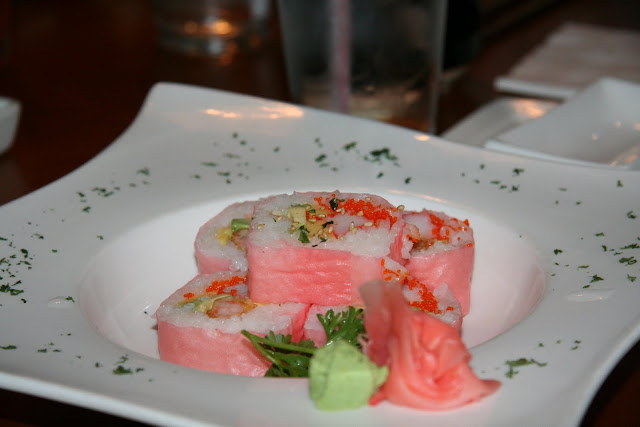 This one is called 'Pink Panther'. Also another yummy one. 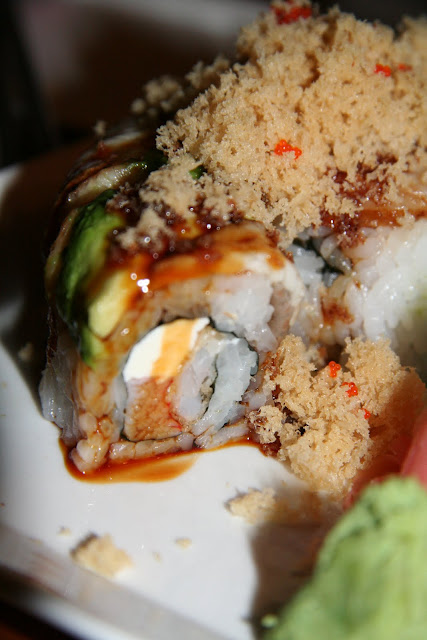 Here's a close up of my 'Jurassic Park' roll. 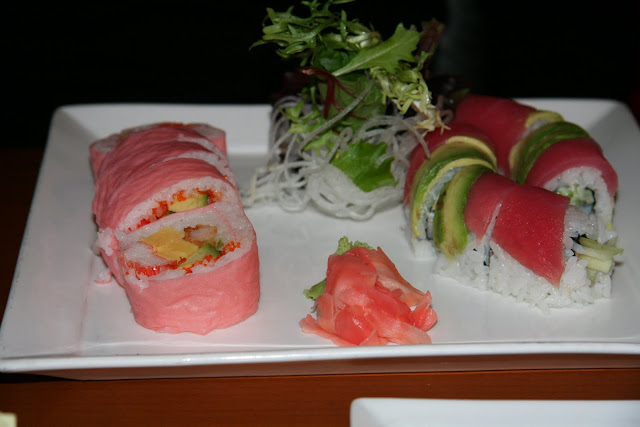 Here's Lauren's plate That's the 'Pink Panther' again on the left and I'm not sure what it was on the right, but I do know that it was another good one. 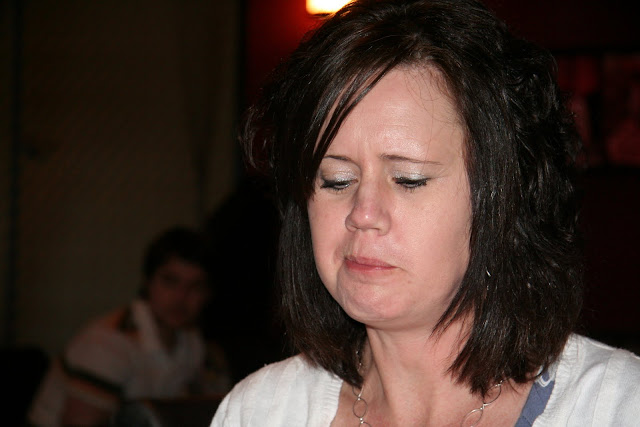 So, like I said Sushi is not for everyone, as Kim found out.  She wasn't a huge fan of it but she did have fun trying them.... 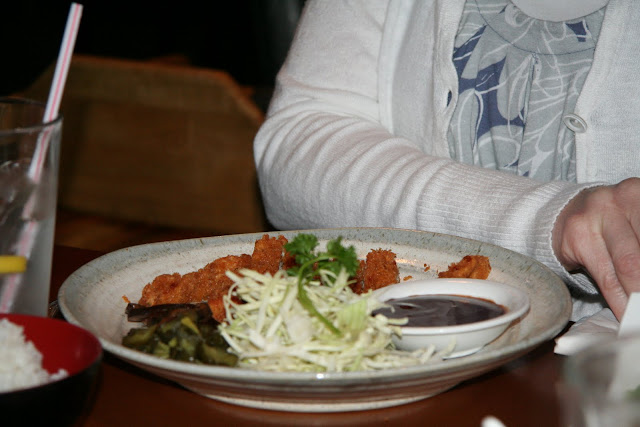 ...but she had more fun eating her breaded chicken. 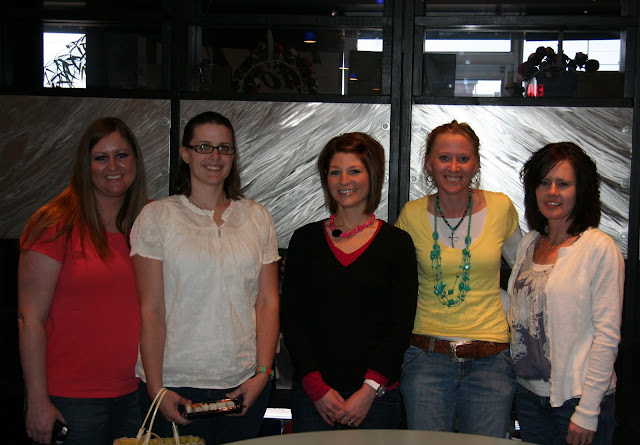 We had such a marvelous time eating sushi and afterwards we headed over to the mall and just walked around and had one great time. Next we went to one of my favorite coffee shops and got some frozen drinks and then headed home.
Posted by Janet Phillips at 5:43 PM