A New Farm Hand is Comming to the Phillips Farm

Well normal for me which means I would cycle every two months. I've been that way since it all started so it was no big deal to me.

The ironic thing about this was that Caleb and I had decided to stop all forms of birth control after the next cycle...which never came.

I went six months without cycling at all...

I blame it on the birth control pills I was on, my Doc says they shouldn't have caused that but I have never had any problems like this till taking that crazy stuff!

Anyways, I know some of you are thinking, "Why didn't you go to you Doctor sooner than six months?"

Well for the first three months I kept thinking something would happen and then nothing....

But on top of that I haven't been down in this area all that long and the first Doc I went to I didn't like at all and was gonna go back to. But then the problem is finding a new Doc and when I do find one I still have to wait at least a month because I was a new patient.  There was one local Hospital that was only about 20 min away, but all a couple of my friends who had babies there said that in nine months they had gone through 3 different Doctors. Well I really didn't like the sound of that! Then one of those friends said there was a Doc just north of us about 30 min that had been there a really long time and she really liked her, so finally I found the place I wanted to go.

So after a month or so of waiting I finally get in to see not the Doc but the Nurse Practitioner, which didn't bother me, cause she was great. She started me on some meds to get me to cycling and I was to take a the ovulation tests to see if and when I was ovulating.

Things I learned: If you ever have to take an ovulation test buy the digital one, they are soo worth it, cause there is either a smiley face if you are ovulating or nothing if you are not. The others there is always two lines you have to determine if the second line is dark or if it's not....horrible design!!

Well after three months of cycling and no baby I went back to the Doc and she thought it would be a good idea to go ahead and start me on Clomid (an ovulation drug). I was actually ovulating, but it was really late in my cycle so she thought this would help....

And help it did, after two months of this stuff I was pregnant!! And bot were we ever grateful.

During all of this going on Caleb and I were doing a lot of praying. I had a lot of friends and family who were getting pregnant or who were having babies and there were a few times that I struggled with being jealous. It wasn't so much that I wasn't getting pregnant it was more that my body was all messed up and not acting like it should. But my amazing and wonderful God stayed right there by my side comforting me. I don't know why I had to go through this but what I do know is that when Caleb and I thought we were ready, God knew we weren't...

Maybe it was because we didn't have all the stuff finished in the house and He knew if he gave us a child when we thought we wanted it it probably would have been a big fight and headache for the both of us, or maybe it was some other reason, what ever it was I trust that He knows best.


So far I have been very blessed to not really get sick, but even if I do get sick or have any problems I am gonna do my best to not complain about it because I have been given a great gift and I have some friends who are able to have children and I know that they would give anything to trade places even if it meant being sick the entire time.

With that being said we will be having our own little Pumpkin this coming October. We actually went to our first Doctor's appointment yesterday and got to see the little one, and as of today the little one is 8 weeks and 3 days along which makes us due on October 3.

You know another small blessing in this is even though we are due in the fall....which everybody knows can be a crazy busy time on the farm....it is actually a great time down this way, because corn should be harvested and it won't be time to put wheat in or harvest beans yet so it works for us! (but seriously any time would have worked for us!

Here's a picture of the little one... 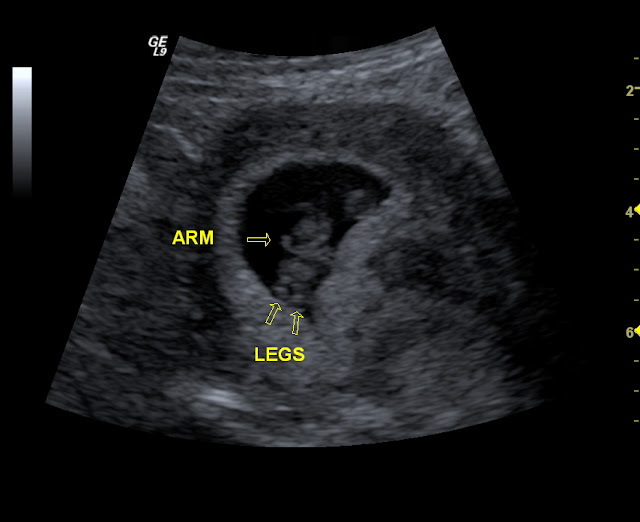 Now remember the little one is only 8 1/2 weeks along so there's not a ton of definition, but you defiantly see the arms and legs and the body and head. Pumpkin is measuring 2 cm long and it little heart was beating 178 beats / minute (for those who don't know that is good)
I was telling a friend of mine from Church last night that I don't know how a woman could go through pregnancy and not believe in God.  I guess I just sit there and think how from the moment that conception takes place the cells are starting to divide and starting to make a precious child. When people say each child is a miracle there is no doubt about that in my mind cause I know it is true!!!
So in thirty-two more weeks we will have a little farm hand and we are soo excited and can't wait. We if it's a boy or a girl, cause we want them both all we care is that it is healthy....ten fingers ten toes! Oh and we aren't going to find out what it is either... Caleb wanted to and I wanted the surprise and guess who won!!!
Well I guess that's all the news I got for now, it's raining here so I'm stuck inside today....o-well!
Catch ya later,
Janet
Posted by Janet Phillips at 10:08 AM

Email ThisBlogThis!Share to TwitterShare to FacebookShare to Pinterest
Labels: Family and Friends, Life Around the Farm