So about three weeks ago Caleb and I made a mad dash trip to Columbia to see my aunt Cy (pronounced Ky). Her full name is Cyola (ky-o-la) Jean Shoemyer Ratliff.....I know some of you out there might think that Cyola was a made up name....well you are right. My Grandpa...Cy's dad...made it up.... and the story that I have always heard is that on the night Cy was born he heard some coyotes howling and from that came the name Cyola. Well, in 2001 or 02.....can't remember which year.....she was diagnosed with cancer. It took the doctors a while to figure out what kind she had....but honestly does it matter when it's cancer. They figured out that it was a rare form of sarcoma. I can't remember the specifics but it was attacking the internal organs, epically her lungs....when it would get worse she would cough a lot. The summer of 2004 she was given 6 months to live...but as my mom would say she was stubborn and wasn't gonna go down with out a fight....now five years later it looks like the cancer is gonna win, and on January 4th at 3:50 in the morning I got the call telling me that the cancer did win....but just the small battle on earth, ultimately God won and has taken her home to a place were there will be no more pain, no more tears and even no more cancer....how great is that. I am sad that I will never get to talk to her again on this earth....I will never get to hear her say "well there's Miss Janet".....but ultimately I rejoice cause she is in a much better place than here! 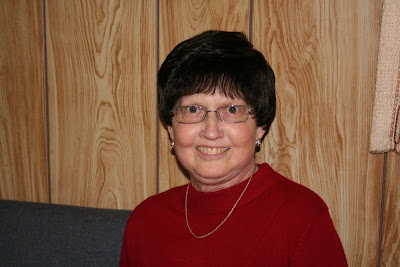 For those who don't know Cy she was one of the kindest people you would ever meet. The story my mom would always tell about Cy is that when the would younger and one of the siblings would be getting in trouble Cy would start crying cause she didn't want them to get the spanking and she would have to get a spanking so she would stop crying....but that's Cy, she would give you the shirt off her back ar anything you needed because she wanted to help. So when this happened to Cy it was hard to for all of us to sit back and watch. Not because we're afraid what will happen to her, because there is no doubt in any of our minds that she will be in Heaven with our Father. She will be in a place of no more pain and no more cancer....and she will be better off than we are here. The hard part for me is to see her in all the pain. But you know through it all I never once heard her complain...and I don't know that anybody else did either. Every time I would see her she would always have a smile on her face. You'd ask her how she was and she would say she was fine. She might have been quitter and softer spoken than her siblings, but she was anything but quite. When she didn't agree with some or someone she would voice her opinion. When she did I learned it was always best to listen cause she usually said something that was worth remembering. She was a tough woman as well...but then again she would have to be...to be married to a Ratliff for 33 years and to raise four Ratliff children....being a Ratliff child myself, I know we aren't easy. She was a very special woman....I know why God wanted to take her so early.

Cancer is a strange thing....less than a year ago Cy was feeling good enough to paint her house, and now she is gone. Life is a very precious thing...you never know how long you have with someone until they are gone. That’s the reasons why three weeks ago Caleb and I went up to Columbia. Ya see, Cy was like another mother to me...I would spend half of my summer over at her house playing with my cousin Jeanna. I think it was when my mom was finishing up college that my brother and sister and i would spend a lot of time over there playing with Cy's four kids. She would watch all 7 of us....with the oldest and the youngest being only 5 1/2 years apart.....I don't know how she did it but some how she kept us all inline and nobody had any broken bones or lost any fingers or toes.
It was a good trip up there...we got to hang out and see all the family and I got to visit with her when she still had some energy. All of Cy's kids had made it back to see her and we all just had a really good visit.
Ya know when it's all said and done we only have one life to live and so do all those around us so make the best each of the days that you are given and tell those that you love that you love them. As I said I know Cy will be in heaven, and i know I will see her again when the Lord calls me home, I hope that each and everyone who reads this can say the same thing. If you can't or you’re not sure find some one you can talk to about it because you never know when it's will be too late. 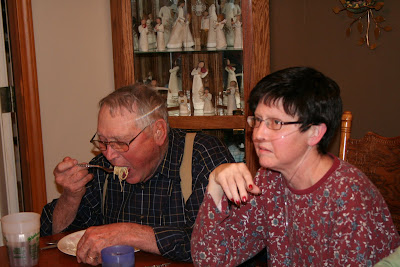 Cy with Papa in the background eatin' some spaghetti 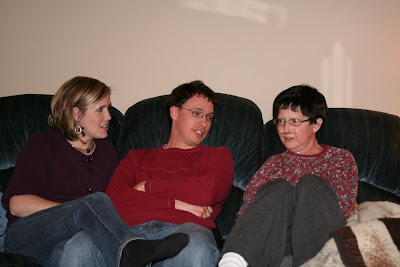 Cy visiting with Jeffery and his wife Heather 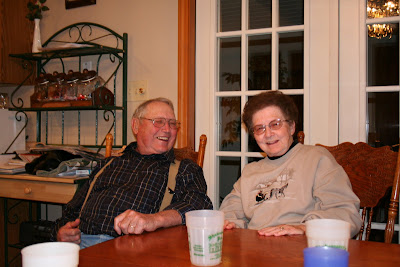 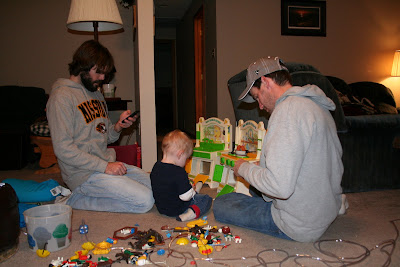 Troy and Scott playin' with Ethan 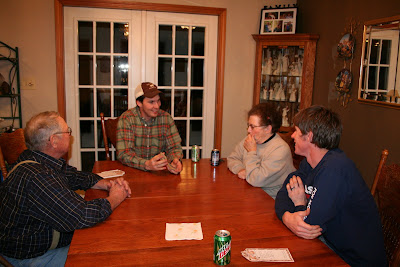 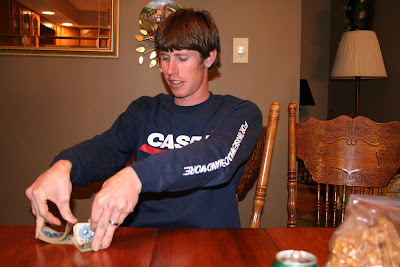 Caleb attempting to shuffle the cards...he's starting to get the hang of it! 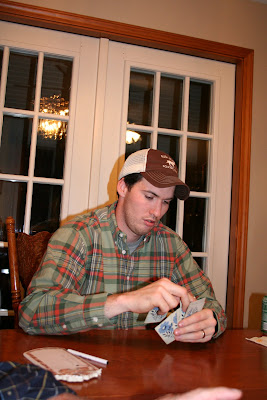 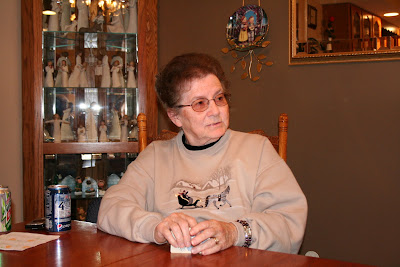 Grnadma giving Caleb 'the look' ....I don't know what he said but 'the look' says it all!!

Here's some of the pictures of Cy from Thanksgiving 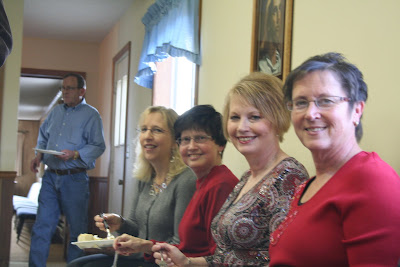 Cy with two sisters and a sister-in-law 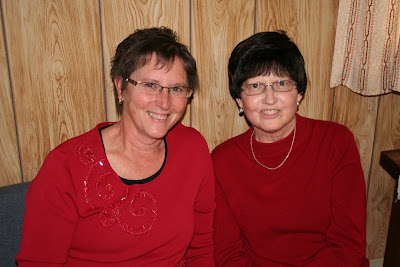 My Mom and Cy 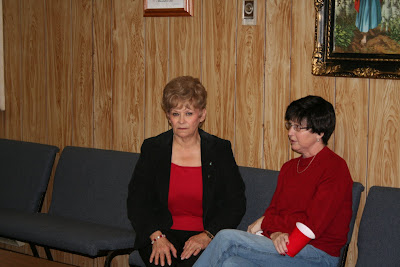 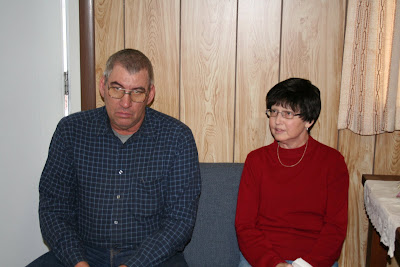 Here's some pictures from mine and Caleb's wedding last year. 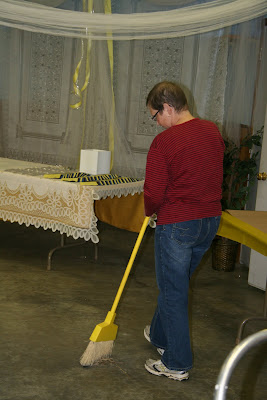 Cy helped with some of the decorating 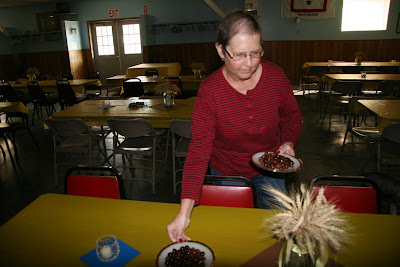 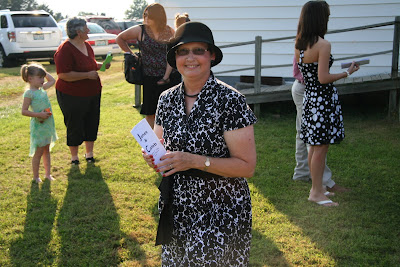 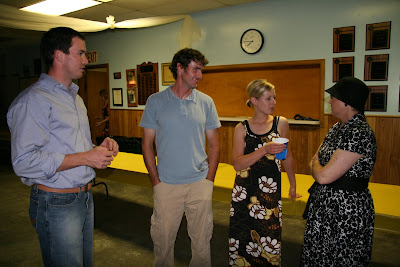 Cy visiting with her son's and daughter-in-law 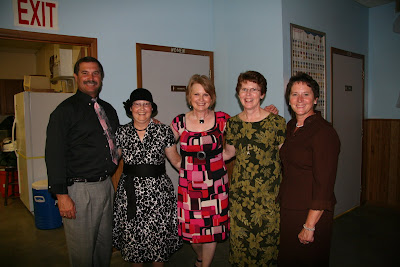 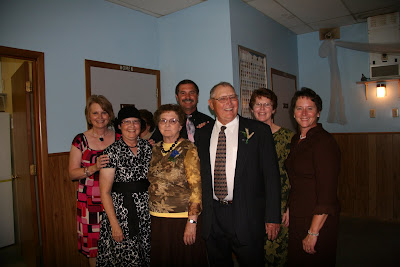 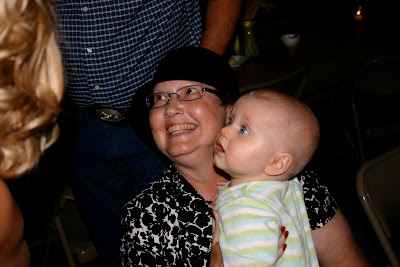 Cy with her grandson Ethan

Cy was a beautiful woman and I, along with many others, will sorely miss her.